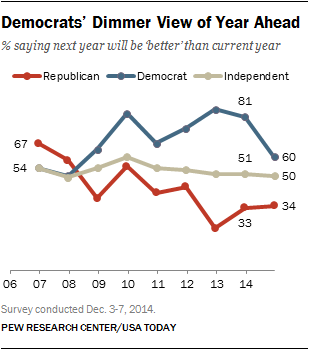 The public remains deeply dissatisfied with the way things are going in the country. Just 26% are satisfied with national conditions, while 71% are dissatisfied. And Americans have muted expectations for the year to come: 49% say they think 2015 will be a better year than 2014, while 42% think it will be worse, according to a survey conducted earlier this month. The current ratings are more pessimistic than in recent years, as the public generally takes an optimistic view of the year to come.

The more negative expectations for 2015 are driven in large part by a shift in views among Democrats. With the Republican Party having gained full control of Congress, 60% of Democrats expect 2015 to be better than 2014 — a drop of 21 points from a year ago when 81% thought 2014 would be better than 2013.

Nonetheless, views among Democrats are brighter than those of Republicans: just 34% of Republicans expect the coming year to be better than the last, little changed from prospective views of 2014 (33% better). In December 2012, following Barack Obama’s reelection, just 22% of Republicans thought 2013 would be a better year than 2012.