Nearly a half century after Martin Luther King Jr. called 11 a.m. on Sunday morning the most segregated hour in America, two Florida churches with different racial compositions – one with a predominantly black congregation, the other predominantly white – are set to merge. 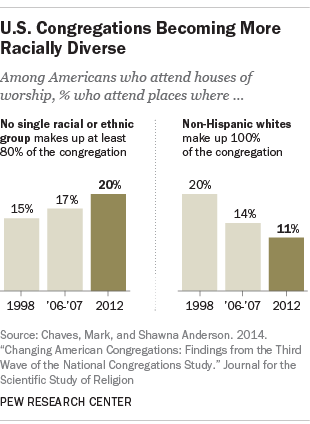 The move occurs amid a larger, but slow-moving, national trend. While the degree of racial segregation within religious congregations remains high, some houses of worship in the U.S. have become more diverse in recent years, according to findings from the most recent (2012) National Congregations Study (NCS), directed by Duke University researcher Mark Chaves. (The most recent study received financial support from the Pew Research Center’s Religion & Public Life Project.)

In addition, the share of white Americans who attend services with no one of another other race or ethnicity is dropping. In 1998, 20% of U.S. congregants were part of congregations that were entirely white. By 2012, that percentage had fallen to 11%, while increasing shares of whites are in congregations with at least some blacks, Hispanics or Asians.

That same dynamic is at work among some other groups. For example, a 2013 Pew Research Center survey of U.S. Hispanics found that 61% of Hispanic churchgoers say their place of worship has a mostly Hispanic congregation – down from 74% who said the same in 2006.

A majority (57%) of congregants overall are part of congregations that are predominantly (at least 80%) non-Hispanic white. Additionally, 14% of Americans who attend services do so at houses of worship with membership that is at least 80% black (including 5% who are in congregations that are entirely black). And another 8% attend churches where at least eight-in-ten churchgoers are Hispanic.

While financial reasons are playing a role in the Florida church merger, the pastors involved say they also are aiming to promote racial reconciliation in the Jacksonville area and beyond.