UPDATE: The details of President Obama’s executive action on immigration were revealed on November 20, 2014. Read this post for to see who will be eligible for deportation relief under the new programs.

Millions of unauthorized immigrants could receive relief from deportation under an executive action that President Obama will announce as early as next week, according to news reports. The decision is expected to affect immigrants who have already been living in the country for a long period of time and is aimed at families in which some members are U.S. citizens and others are not. 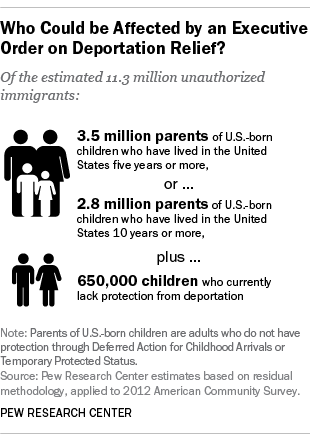 While details of the president’s new policy are not known, news reports have noted some possible actions. How would the numbers break down? Here are Pew Research Center’s estimates on how many of the nation’s estimated 11.3 million unauthorized immigrants may be affected, based on news reports of the Obama administration’s plans:

Some political analysts have said the president’s decision to delay executive action on immigration may have affected Latino turnout on Election Day. Latinos had mixed feelings about the decision. About a third (35%) of Latino registered voters said they are disappointed or angry with the decision, while one-fourth (26%) said they are very happy or pleased, according to our survey in October.

After Republicans won control of the Senate and House last week, Obama reiterated his pledge to take executive action on immigration before the end of the year. But he faces renewed opposition, as Republicans this week promised to try to block the move, with one group of lawmakers proposing to stall a spending bill that needs to be passed by the end of December.

The new policy is expected to be the biggest immigration change of Obama’s presidency and his boldest use of executive power. Republicans have criticized Obama in the weeks leading up to the announcement, calling any significant change to immigration policy an overreach of his executive authority. Congress has not made progress on a major immigration bill since June 2013, when the Senate passed a measure that would create a path to citizenship and funded increased security at the U.S.-Mexico border.

To date, Obama’s most significant immigration policy change has been 2012’s Deferred Action for Childhood Arrivals (DACA) program, which provides temporary relief from deportation and a two-year work permit to qualifying young adults ages 15 to 30 who were brought to the U.S. illegally as children. Some 120,000 unauthorized children and 475,000 unauthorized adults have received temporary deportation relief under the program. Another estimated 400,000 unauthorized immigrants have deportation protection because they have Temporary Protected Status.

But the administration has been criticized for also deporting record numbers of unauthorized immigrants. A record 438,421 unauthorized immigrants were sent home in fiscal year 2013, and on average, more than 400,000 immigrants have been deported annually since 2009. Under the Bush administration, there were about 252,000 deportations a year, though that number rose to about 360,000 during Bush’s last year in office.

Correction: A previous version of this post referred to the president’s implementation of his new immigration policy as an executive order. He has taken executive action.