A new Pew Research Center survey of 18 Latin American countries and the U.S. territory of Puerto Rico asked people from Mexico to Argentina about their religious affiliation, beliefs and practices. The survey also explored Latin Americans’ views on a wide variety of topics, including support for same-sex marriage and legal abortion, the morality of divorce and how best to aid the poor.

Here are a few of the key findings: 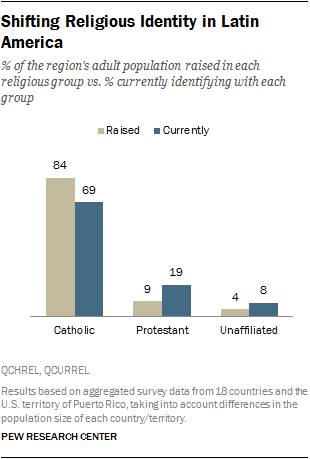 Latin America remains overwhelmingly Catholic, but Catholics have declined substantially as a share of the region’s overall population. As recently as 1970, Catholics comprised more than 90% of Latin America’s population, according to the World Religion Database and the Brazilian and Mexican censuses. Today, the Pew Research survey shows that 69% of Latin Americans identify as Catholic – 15 percentage points lower than the share of adults who say they were raised Catholic (84%).

2Losses for Catholics have meant gains for Protestant churches and the category of people who do not identify with any religion. Just 9% of adults in the region were raised Protestant and 4% were raised unaffiliated, but twice as many now describe themselves as Protestants (19%) or unaffiliated (8%). Most Protestants across Latin America identify as Pentecostal Christians or are members of Pentecostal denominations.

3Why are Latin Americans leaving the Catholic Church for Protestantism? The survey asked respondents to rate eight possible explanations. Protestants who converted from Catholicism most frequently say they “wanted a more personal experience with God.” Other commonly cited reasons include the style of worship at their new church and a desire for greater emphasis on morality. 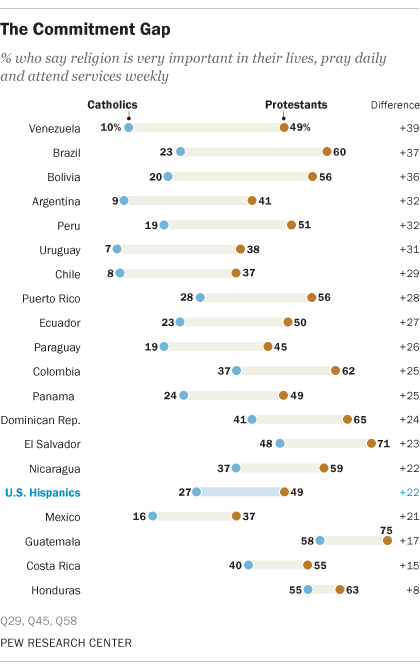 In general, Latin American Protestants are more religiously committed than Catholics. We base this on a variety of measures, including frequency of church attendance and prayer as well as the level of importance they ascribe to religion in their lives. Generally, Protestants also are more likely than Catholics to oppose legal same-sex marriage and abortion and to say that wives must always obey their husbands.

6Pope Francis is overwhelmingly popular among Catholics in Latin America – especially in his home country of Argentina, where 98% of Catholics say they have a favorable opinion of him. Majorities of Catholics throughout the region also describe Francis’ election to pope as a “major change” for the Catholic Church. But former Catholics are less persuaded that the pope represents a significant change for the church, with many offering no definite opinion on his impact.

7In all of Latin America, people in the Central American nations of Honduras, Nicaragua, Guatemala and El Salvador are among the most religiously committed and socially conservative. By contrast, people in the “Southern Cone” countries of Argentina, Chile and especially Uruguay are among the most secular, with relatively low levels of religious commitment. The biggest country surveyed – Brazil – falls somewhere between these two groups in terms of religious commitment and social attitudes.