Given how polarized American politics and society are these days, it’s easy to think of Democrats and Republicans, liberals and conservatives, as entrenched and embittered enemies locked in endless battle. But sometimes politics does indeed make strange bedfellows, and data from the Pew Research Center’s latest political typology report show some surprising areas of agreement between otherwise opposing groups.

Take, for example, the question of whether the U.S. government should collect telecommunications data as part of its anti-terrorism efforts. Opposition to such practices is highest at both ends of the political spectrum: 69% of Steadfast Conservatives, 61% of Business Conservatives and 58% of Solid Liberals say they disapprove of government data collection. 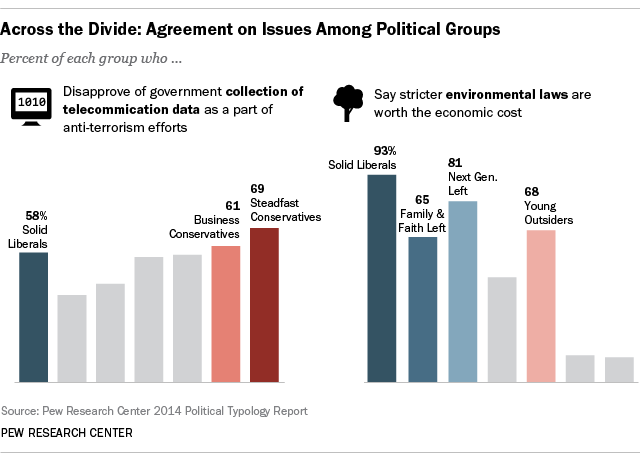 When it comes to race and discrimination, though, it’s the Next Generation Left that looks more like the right-leaning groups. Two-thirds (67%) of Next-Gens say the U.S. has made sufficient changes to give blacks equal rights with whites, aligning them with Business Conservatives (83%), Steadfast Conservatives (81%) and Young Outsiders (70%). Next-Gens also are the Democratic-oriented group least likely (19%) to say racial discrimination is the main thing holding back black people.

Conversely, about two-thirds (68%) of the GOP-leaning Young Outsiders say stricter environmental laws and regulations are worth the economic cost, putting them in the same camp as Solid Liberals (93%), the Next Generation Left (81%) and the Faith and Family Left (65%).

Support for and opposition to same-sex marriage is all over the typological map. Strong majorities of Democratic-oriented Solid Liberals (89%) and the Next Generation Left (78%) support it, as do 68% of Young Outsiders. The two groups with majority opposition to same-sex marriage are Steadfast Conservatives (84%) and the Faith and Family Left (55%). (Opinion within the other two groups, Business Conservatives and Hard-Pressed Skeptics, is roughly divided.)

There are, we suppose, two ways to look at all this ideological cross-pollination, depending on whether you’re a glass-half-full or glass-half-empty sort of person. You can see it as evidence that there are areas where groups could work together across partisan lines to resolve seemingly intractable issues, or that both parties’ coalitions are so internally fractured that finding workable solutions to those issues is well-nigh impossible.