American mothers today look far different from mothers celebrated 100 years ago when President Woodrow Wilson issued a proclamation calling for a day of reverence for mothers. Here’s what we know about today’s American moms and how they’ve changed over time.

1Who are American moms? 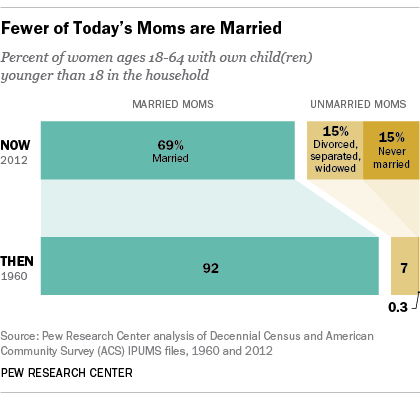 There are about 85 million mothers in America, according to a recent U.S. Census Bureau estimate. Our analysis of census data shows that the share of mothers with kids younger than 18 at home has declined. Today, about a third (34%) of women ages 18-64 have young children at home; in 1960, 52% did. And women are having children at a later age than they used to. In 2012, the average age of a first-time mother was 25.8 years, up from 21.4 years in 1970.

The marital status of mothers has also changed dramatically. In 1960, nearly all mothers with young children were married, compared with just seven-in-ten today. About four-in-ten (41%) of all births today are to unmarried women; up from just 5% of births in 1960.

2How many kids do they have?

The Census reports that among women ages 40 to 44 — who are near the end of their child-bearing years and likely to have already completed their lifetime fertility — one third has had two children, 19 percent have either had one or three and about 10% have had four or more. About one-in-five women (19%) in this age group has had no children.

American mothers are now expected to have, on average, 1.9 children, compared with 3.7 children in 1960. But this number varies by race and ethnicity. The average for Hispanic mothers is 2.2 children over the course of their lifetime, compared with 1.9 for non-Hispanic black mothers, and 1.8 for Asian and non-Hispanic white mothers.

How many do they wish they had? According to 2006-2008 General Social Survey data, about half (52%) of American women (who gave numerical responses) said their ideal number of children is two, and an additional 44% said that three or more children is their ideal. 14% said the ideal family size was “as many as [someone] wants.”

3How do moms spend their time?

When it comes to leisure time, fathers out-relax moms, spending 28 hours per week on leisure activities on average, compared with 25 hours for moms. The leisure gap between moms and dads is especially wide on the weekends.

4How many moms are working? 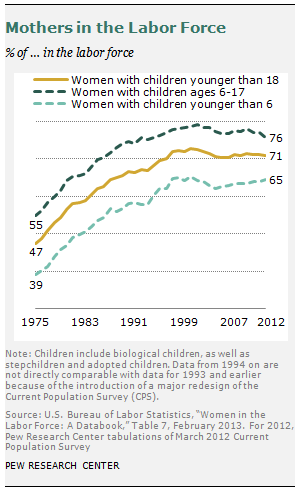 More mothers are also now providing for their families. A record 40% of all households with children under the age of 18 include mothers who are either the sole or primary source of income for the family, up from just 11% in 1960. About two-thirds of these “breadwinner moms” are single mothers.

When you ask mothers what their “ideal” working situation would be, most say they would rather work than stay at home, but they prefer part-time work over full-time. And half of all working moms with young kids say that being a working parent has made it harder for them to advance in their careers. Only 16% of working dads say the same.

5How do moms feel about the job they’re doing raising their kids? 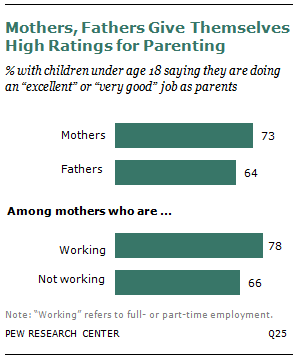 Despite spending more time with their kids than they did a generation ago, about a quarter of mothers (and half of fathers) say they do not spend enough time with their children. Even so, about three-quarters of moms give themselves high ratings on their parenting. Working mothers are particularly likely to give themselves a thumbs up.