This section looks at a variety of economic, educational, health, political and social indicators to assess change in the relative well-being of black and white Americans in recent decades.

The data present a mixed picture. The economic gulf between blacks and whites that was present a half century ago has not disappeared. Measures of household income, household wealth, and homeownership show that the gaps are as wide or wider today as they were in the 1960s and 1970s. The incarceration rate of black men is more than six times higher than that of white men, slightly larger than the gap in 1960.

There are also large and widening gaps between blacks and whites in key aspects of family formation. The falloff in marriage rates has been much steeper among African Americans than among whites. The share of births to unmarried women has risen sharply among both groups; however, the rate among blacks is more than double that among whites.

On the other hand, blacks have made progress relative to whites in other important realms. The gap in high school completion between blacks and whites has narrowed, as has the white-black gap in life expectancy. And, while blacks had lagged behind whites in voter participation for most of the past half century, turnout among blacks nearly matched that of whites in the 2008 presidential elections and surpassed it in 2012. 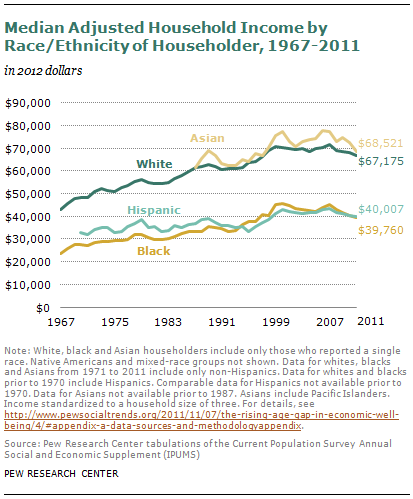 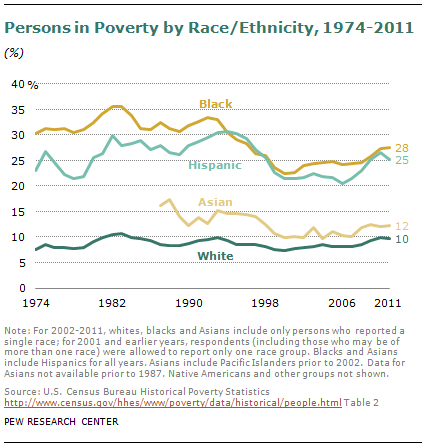 Black Americans are nearly three times as likely as white Americans to live in poverty, according to the 2012 March Current Population Survey.3 Among whites, 10% were poor in 2011, compared with 28% of blacks, 25% of Hispanics and 12% of Asians.

Looking at trends, the black-white poverty gap remains wide, although it has narrowed somewhat since the mid-1970s, as white poverty rose slightly and black poverty declined slightly. In 1974, 8% of whites were poor but so were 30% of blacks. The black-white gap has not changed markedly since 2007. 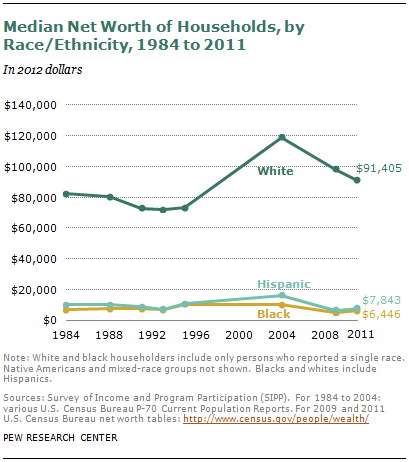 In 2011, the typical white household had a net worth of $91,405, compared with $6,446 for black households, $7,843 for Hispanic households and $91,203 for Asian households. The figures for net worth—also known as wealth—are based on assets minus liabilities in Census Bureau data from the Survey of Income and Program Participation.

The gap between black and white wealth has grown somewhat since 1984, the first year for which data became available. In 1984, black households had a median net worth equal to 9% that of white households, compared with 7% in 2011. The gap narrowed somewhat in the 1990s: In 1995, black net worth was 14% of white net worth. 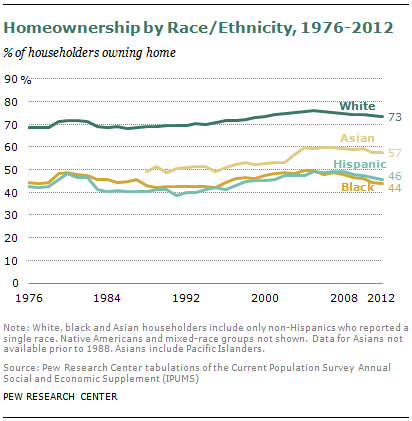 In 2012, 73% of white households owned their own homes, compared with 44% of black households, 57% of Asian households and 46% of Hispanic households, according to the Census Bureau’s Annual Social and Economic Supplement. 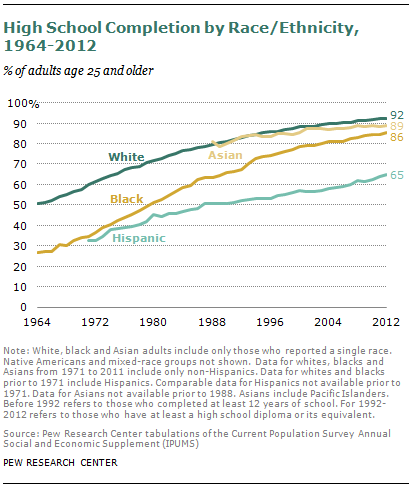 Today’s high school completion rates are similar for adults ages 25 and older who are white, black or Asian, but they lag for Hispanics. In 2012, 92% of white adults, 86% of black adults and 89% of Asian adults had at least a high school education, as did 65% of Hispanic adults.

High school completion rates have climbed for all four groups in recent decades, according to the Current Population Survey, but more sharply for blacks and Hispanics than for whites, so those two groups have narrowed the attainment gap with whites. 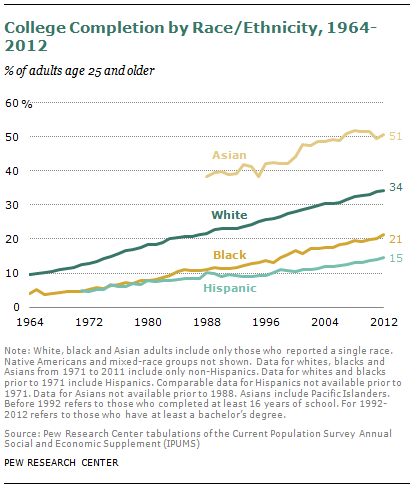 Looking at adults ages 25 and older, the gap in college completion between whites and blacks, as well as the gap between whites and Hispanics, is larger than that in high school completion. In 2012, 34% of white adults had finished college, compared with 21% of black adults and 15% of Hispanic adults. Among Asians, 51% had completed college, a higher share than for whites. 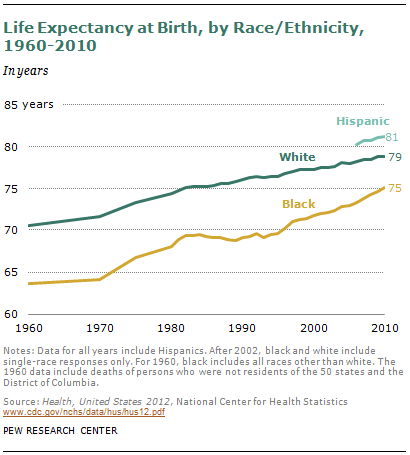 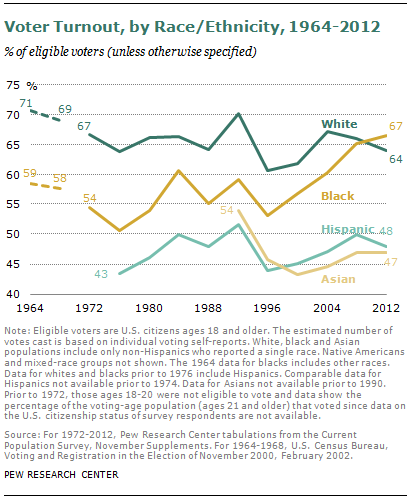 Census Bureau estimates of voter turnout by race indicate that black voters have not only closed the gap with white voters in participation, but they exceeded whites on this measure in the 2012 presidential election. In 2012, 67% of eligible black voters cast ballots, compared with 64% of eligible white voters.

By contrast, in the 1964 presidential election, an estimated 71% of eligible white voters participated, compared with 59% of black voters.6 The size of the gap in black and white voter participation has fluctuated since then, with black participation ranging from 79% to 87% of white participation through 1996.

In 2000, the black participation rate was 92% that of the white rate. The gap narrowed dramatically to 99% in 2008, the year Barack Obama ran for president as the first black major-party nominee. In 2008, 65% of black eligible voters participated, compared with 66% of whites. 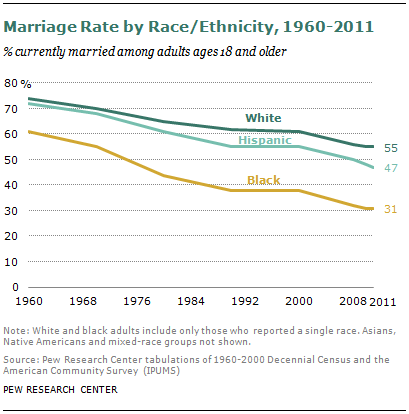 Marriage is considered an indicator of well-being in part because married adults are economically better off, although that may reflect the greater propensity of affluent adults to marry.

Marriage rates have fallen for all groups, but more sharply for blacks than for whites. In 1960, 74% of white adults were married, as were 61% of black adults. In that year, the marriage rate for black adults was 82% that of the white rate.

To some extent, the differences reflect a widening gap in the marriage rate by educational attainment. In 1960, marriage rates were similar for well-educated and less-educated Americans, but these days college graduates are markedly more likely to be married than those with a high school diploma or less. 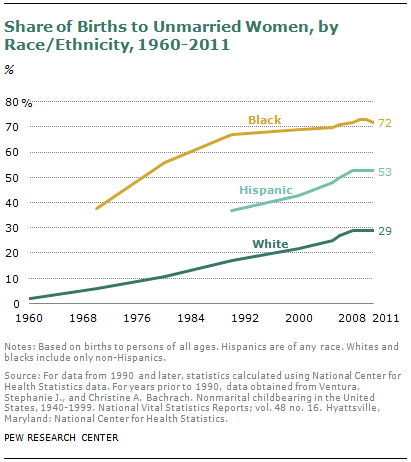 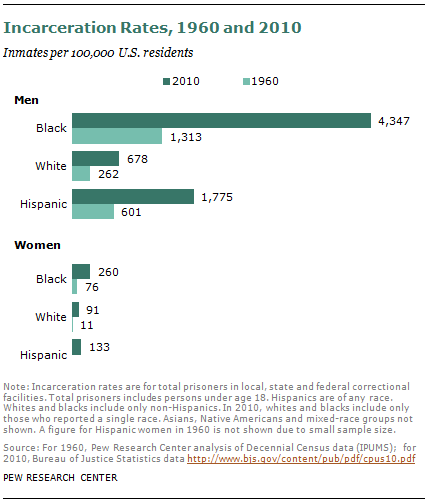 In 2010, the incarceration rate for white men under local, state and federal jurisdiction was 678 inmates per 100,000 white U.S. residents; for black men, it was 4,347. According to the Bureau of Justice Statistics, black men were more than six times as likely as white men to be incarcerated in 2010.

In 1960, the white male incarceration rate was 262 per 100,000 white U.S. residents, and the black male rate was 1,313, meaning that black men were five times as likely as white men to be incarcerated.

Statistics for female prisoners show a similar pattern but a different trend. Black women are more likely to be incarcerated than white women, but the gap between both groups is smaller than it was. In 2010, the incarceration rate for white women was 91 per 100,000 white residents; for black women it was 260. In 1960, the white rate was 11, and the black rate was 76.

Next: Appendix 1: About the Survey Data
← Prev Page
Page1Page2Page3You are reading page4Page5
Next Page →