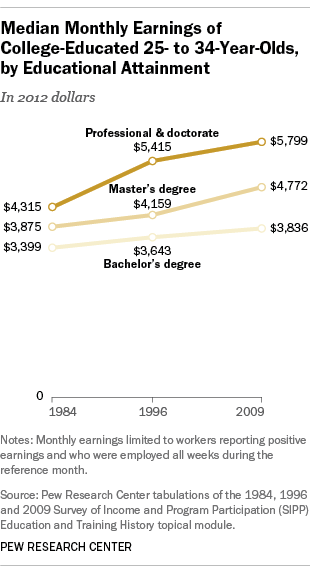 Millennials are the nation’s most educated generation in history in terms of finishing college.  But despite the stereotype that today’s recent college graduates are largely underemployed, the data show that this generation of college grads earns more than ones that came before it.

In 2009 (the latest year available) the median monthly earnings of young adults with a bachelor’s degree and no further education was $3,836, a 13% increase from 1984 ($3,399), according to the Census Bureau’s Survey of Income and Program Participation (SIPP). 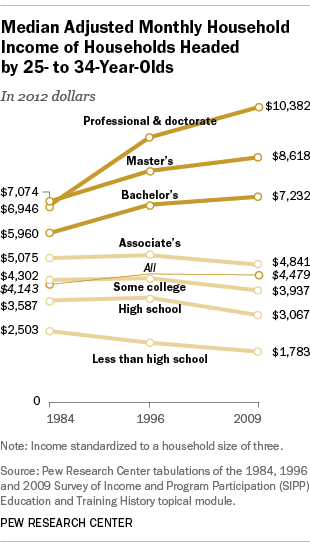 Admittedly, the earnings figures above only reflect young adults who can find work.  They also do not take into account important demographic changes that have occurred along educational lines.  Relative to less-educated young adults, those with a bachelor’s degree have become more likely to be married to someone in their socioeconomic class.   And, due to the delay in marriage in this group, there may be delays in having children, which means fewer dependents to support in the household .  These are all arguments for looking at another standard measure of economic well-being: household income.

The median adjusted monthly household income of households headed by a young adult with a bachelor’s degree has increased by about $1,300 in inflation-adjusted dollars from 1984 ($5,960) to 2009 ($7,232).  Household income gains have been even greater among households with advanced degrees (up $1,500 for those headed by a 25- to 34-year-old with a master’s degree and up $3,400 for young adult heads with a professional or doctorate degree).

In stark contrast, the household income of young adults with less than a bachelor’s degree has declined in real terms since 1984.