Defense Secretary Chuck Hagel’s plans to cut back the size of America’s army to pre-World War II levels are likely to run into political opposition on Capitol Hill. The cuts are also at odds with the views of Americans who say spending should be kept as it is, or increased.

Almost half (47%) of the public said military spending should be kept about the same, according to a survey conducted Oct. 30-Nov. 6, 2013. An additional 23% said it should be increased while 28% favored reductions. The findings reflect roughly the same sentiment found in a survey conducted a year ago. 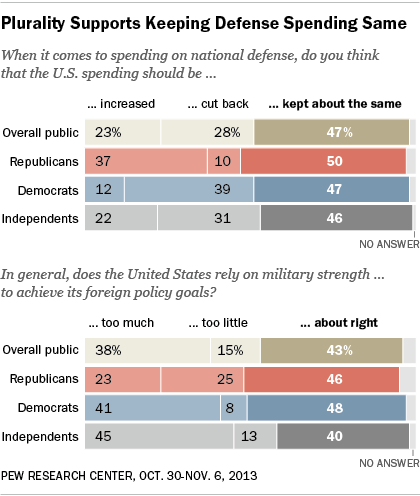 As a backdrop to the public’s views on military spending, the October-November survey found that 56% of Americans said the U.S. should ensure that it keeps its position as the only military superpower, a view that was virtually unchanged since 2009.

However, when the military spending question was put into the context of a specific choice — whether reducing the deficit was more important than funding the Pentagon at current levels — Americans said by a 51% to 40% margin that deficit reduction was more important, according to a December 2013 survey.