As the March 1 deadline for a possible budget sequester approaches, a new national survey finds limited public support for reducing spending for a range of specific programs, including defense, entitlements, education and health care.

For 18 of 19 programs tested, majorities want either to increase spending or maintain it at current levels. The only exception is assistance for needy people around the world. Nonetheless, as many say that funding for aid to the needy overseas should either be increased (21%), or kept the same (28%), as decreased (48%).

The survey by the Pew Research Center, conducted Feb. 13-18, 2013 among 1,504 adults, finds little change in attitudes about government spending since 2011. One notable exception: somewhat fewer support reducing military defense spending, which would bear a major share of the sequester cuts.

In the current poll, 24% say that if they were making up the federal government’s budget this year they would decrease spending for military defense, down from 30% two years ago. More than seven-in-ten either support increasing defense spending (32%) or maintaining it at current levels (41%).

There continue to be sizable partisan differences in views of funding for government programs. For most, substantially larger shares of Republicans than Democrats support decreased funding. Yet there are only two possible reductions that draw majority support from Republicans – foreign aid (70%) and unemployment assistance (56%). There is no program among the 19 included in the survey that even a plurality of Democrats wants to see decreased.

An earlier report on this survey showed that 70% think it is essential for the president and Congress to pass major legislation to reduce the federal budget deficit this year. That portion of the survey, conducted in collaboration with USA TODAY, also found that more Americans want the focus of deficit-reduction efforts to be mostly on spending reductions rather than tax increases.

Yet the survey also finds higher percentages support increases rather than decreases in spending for education, veterans’ benefits, entitlements and other programs. Six-in-ten (60%) say they would increase education funding, while 53% want funding for veterans’ benefits and services to grow and 41% say the same about spending on Social Security. 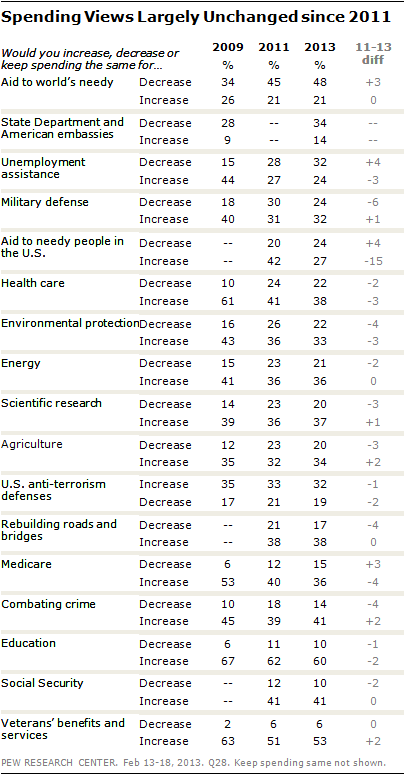 Public attitudes about government spending are relatively unchanged from 2011; across 14 of the 16 issues where 2011 trends are available there is no significant shift in public opinion over the last few years.

Attitudes about military defense spending, which would be subject to the largest cuts under the budgets sequester, have also shifted slightly. There is now is somewhat less support for decreasing spending on military defense (24% today, 30% in 2011). 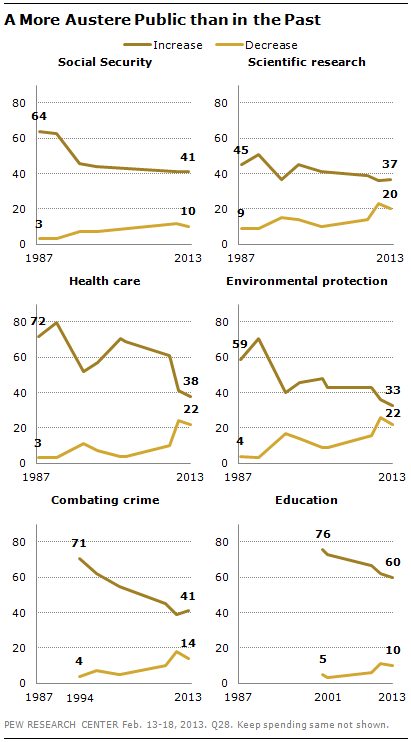 The overall stability of public opinion over the last two years stands in contrast to the shift from 2009 to 2011, when there was a drop in support for increases in spending across many of these same areas (See Fewer Want Spending to Grow, But Most Cuts Remain Unpopular, February 10, 2011).

While there has been little change in public views on government spending within the last two years, the long-term trend over the past quarter-century is, for the most part, away from spending growth.

When the question was first asked in 1987, a 64% majority felt that Social Security spending should be increased; this stands at 41% in the new survey. Similarly, support for increased federal spending on health care has fallen from 72% to 38% since 1987, and the share favoring more spending on environmental protection has declined from 59% to 33%.

While the trends are shorter, two other issues have seen similar trajectories. When first asked in 1994, 71% supported more federal spending on combating crime. This figure stands at 41% today. And even just over the past 12 years, the share saying education spending should be increased has fallen from 76% to 60%. 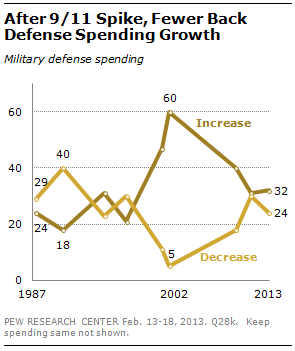 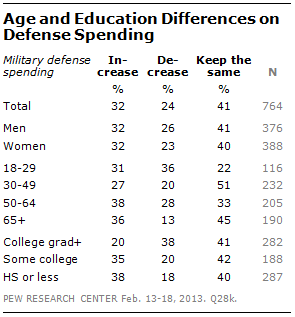 Beyond the significant political divide over defense spending, there also are differences of opinion by age and education. Those younger than 30 are far more likely to support defense spending cuts (36%) than are those 65 and older (13%).

The divide also is stark along educational lines: college graduates are twice as likely to back defense spending cuts compared with those who have not attended college (38% vs. 18%).

As Sequester Deadline Looms, Little Support for Cutting Most Programs
OverviewPartisans Differ on Gov’t SpendingLittle Change in OpinionsLong-Term TrendsViews of Defense Spending
About the Survey