Ben Bernanke holds his final press conference today as chairman of the Federal Reserve Board. And, five years after the 2008 economic meltdown thrust him into a major role in the nation’s struggle to climb out of the Great Recession, Americans have offered a mixed verdict on his time in office. 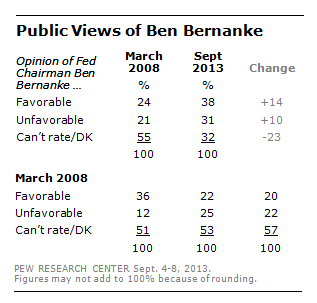 Bernanke pursued a strategy of trying to inject new life into the American economy by having the Fed aggressively buy U.S. Treasury and mortgage bonds in an effort to keep interest rates low and spur job creation. All eyes today are on what signals the Fed will send out about whether it will taper off the $85 billion-a-month purchases now that the economic recovery appears to be gaining more momentum.

The public offered mixed views on Bernanke in a September survey: 38% saw him favorably, 31% unfavorably and 32% expressed no opinion or were unable to rate him.

As much as Bernanke was in the news in recent years, he was not as prominent a figure as his predecessor, Alan Greenspan, the second longest-serving chairman of the Fed. When Greenspan stepped down in 2006, in less economically-turbulent times, a Washington Post/ABC News poll showed 72% approval of the job he had done, and a Gallup poll, conducted at the same time, found a 65% approval rate.

For Bernanke, what stands out is that he doesn’t seem to have made much of an impression with the public. When Americans were asked about him in March 2008, more than half (55%) said they couldn’t rate him or didn’t have an opinion. Two years ago, a phone survey found only 44% of the public could correctly identify Bernanke’s job when asked whether he was Fed chief, NFL commissioner, Education Secretary or the CBS Evening News anchor.

Views of Bernanke tracked closely with perceptions of the direction of the stock market, according to our September survey. Among the 21% of those who said the market had fully recovered from the recession, Bernanke is viewed favorably by a 55% to 32% margin, with 14% expressing no opinion. But for the 53% of the public who saw only partial recovery in the market or hardly any at all, the shares rating Bernanke favorably are 38% and 30% respectively.

While Bernanke was not the only major player in economic policy since the 2008 meltdown, views of him come against a backdrop of public skepticism about the extent to which the country has pulled out of its hard times. The September poll  found that 63% still saw the economy as no more secure than it was in 2008 and 33% said their own finances hadn’t recovered.