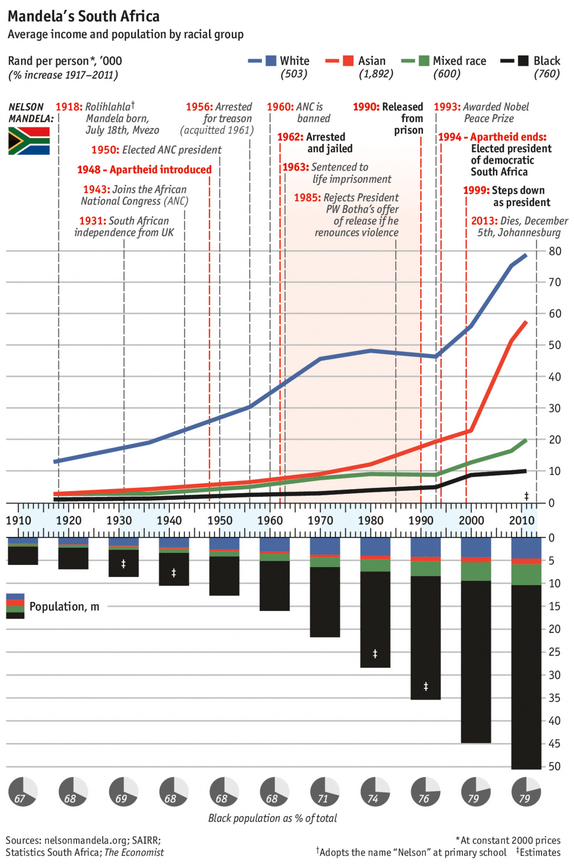 Over the course of Nelson Mandela’s 95 years, South Africa evolved from a white-ruled British dominion to a republic representative of its majority-black population. But while the country has changed politically and demographically, economically it still looks much as it did nearly a century ago, divided along racial lines.

This infographic from The Economist shows how economic disparities between South Africa’s major racial groups (measured in real per-capita income) have grown over time. The gap between whites and all other groups grew wider till about 1970; white income growth flattened out in the 1970s and 1980s, as sanctions hobbled the country’s economy. But as sanctions were lifted after the collapse of the apartheid regime, whites and Asians (mostly of Indian descent) have benefited the most while black incomes have been nearly flat.

According to South Africa’s 2011 census, average annual household income for blacks was 60,613 rand (roughly $8,700 at the then-current exchange rate), about a sixth the average annual income among white households and a quarter that of Asian households. Mixed-race (or “coloured” in South African parlance) households had an average income about twice that of blacks. (Note that those figures are in current dollars, and so aren’t directly comparable to the inflation-adjusted ones in the Economist chart.)

The other trend the Economist’s graphic makes clear is how much faster South Africa’s black population is growing relative to other racial groups. Blacks made up 79.2% of the country’s 51.8 million people, according to the 2011 census, up from 77.4% in 1996; whites were 8.9% of the population, down from 11% in 1996. (The population shares of mixed-race and Asian people have stayed fairly constant.)

How wealth inequality has changed in the U.S. since the Great Recession, by race, ethnicity and income

5 facts about race in America