American Jews have been debating the impact of intermarriage for decades. Does intermarriage lead to assimilation and weaken the Jewish community? Or is it a way for a religion that traditionally does not seek converts to bring new people into the fold and, thereby, strengthen as well as diversify the Jewish community? The new Pew Research Center survey of U.S. Jews did not start this debate and certainly will not end it. However, the survey’s findings on intermarriage, child rearing and Jewish identity provide some support for both sides.

Surveys are snapshots in time. They typically show associations, or linkages, rather than clear causal connections, and they don’t predict the future. We do not know, for example, whether the large cohort of young adult children of intermarriage who are Jewish today will remain Jewish as they age, marry (and in some cases, intermarry), start families and move through the life cycle. With those cautions in mind, here’s a walk through some of our data on intermarriage, including some new analysis that goes beyond the chapter on intermarriage in our original report. (We would like to thank several academic researchers, including Theodore Sasson of Brandeis University, Steven M. Cohen of Hebrew Union College and NYU Wagner, and Bruce Phillips of Hebrew Union College and the University of Southern California, for suggesting fruitful avenues of additional analysis.)

In addition, intermarriage rates appear to have risen substantially in recent decades, though they have been relatively stable since the mid-1990s. Looking just at non-Orthodox Jews who have gotten married since 2000, 28% have a Jewish spouse and fully 72% are intermarried. 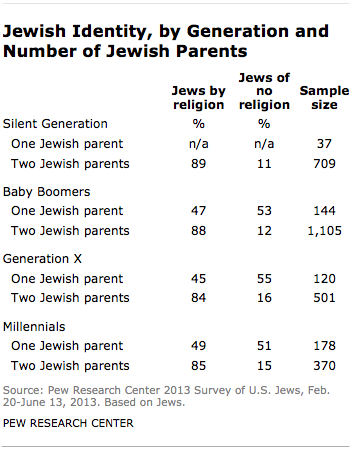 Among Jews, the adult offspring of intermarriages are also much more likely than people with two Jewish parents to describe themselves religiously as atheist, agnostic or just “nothing in particular.” This is the case among all recent generations of U.S. Jews.

Summing this up, it appears that the share of Jews of no religion is similar – and relatively low – among recent generations of Jews with two Jewish parents. It is much higher (and also fairly similar across generations) among self-identified Jews with only one Jewish parent. 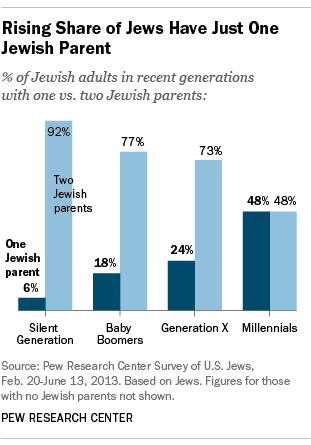 But it is also important to bear in mind that the percentage of Jewish adults who are the offspring of intermarriages appears to be rising. Just 6% of Jews from the Silent Generation say they had one Jewish parent, compared with 18% of Jewish Baby Boomers, 24% of Generation X and nearly half (48%) of Jewish Millennials. The result is that there are far more Jews of no religion among younger generations of Jews than among previous generations, as shown in the survey report. 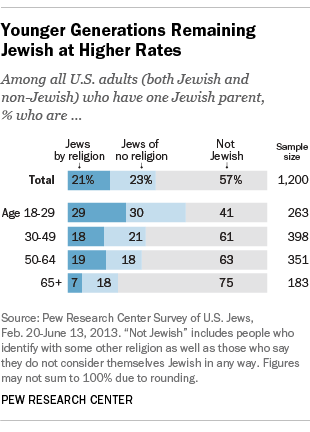 Finally, it has often been assumed that Jewish women are less inclined to intermarry than are Jewish men. As Bruce Phillips, a sociologist at Hebrew Union College in Los Angeles, has written: “In American popular culture, intermarriage has been the [domain] of Jewish males. Starting with ‘Abbie’s Irish Rose’ and ‘The Jazz Singer’ following the turn of the century through ‘Bridget Loves Bernie’ and the ‘Heartbreak Kid’ in the early 1970s to ‘Mad About You’ in the 1990s, the plot is about a Jewish married man in love with a stereotypical [non-Jewish woman].”