Orthodox Jews are a growing and in many ways distinctive segment of the American Jewish community, according to the new Pew Research Center survey of U.S. Jews.

The survey went to considerable lengths to obtain a representative sample of the Orthodox, including extra interviews in communities where Orthodox Jews are concentrated. No calls were made on the Jewish Sabbath or on Jewish holidays, when observant Jews generally will not pick up a telephone. All together, the survey included more than 500 Orthodox Jewish respondents.

Here are eight interesting facts about the Orthodox from the new survey: 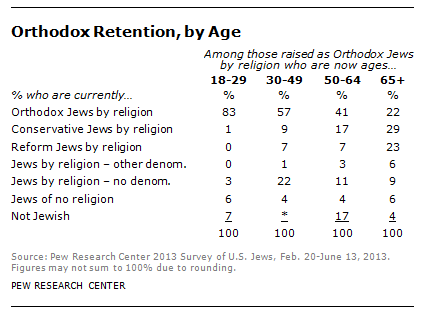 The retention rate of the Orthodox seems to be improving. In the past, high fertility in the U.S. Orthodox community was at least partially offset by attrition: Roughly half of the survey respondents who were raised as Orthodox Jews say they are no longer Orthodox. But the falloff from Orthodoxy appears to be declining and is significantly lower among 18-to-29-year-olds than among older people.

Jews who describe themselves as “Modern Orthodox” tend to have much higher levels of secular education than those who identify as Hasidic and Yeshivish: 65% of the Modern Orthodox Jews surveyed have graduated from college, compared with just 25% of those in the combined Hasidic and Yeshivish category, also commonly called Haredi or ultra-Orthodox Jews. (Hasidic Jews, including the Chabad movement, are part of a tradition that dates back to 18th century Eastern Europe. Yeshivish Jews, including members of Agudath Israel of America, are part of a tradition that emphasizes the kind of Talmud scholarship exemplified in the past by Lithuanian yeshivot, or religious schools.)

Not all Jews who describe themselves as Orthodox always meet all the standards that might be considered normative for their group. For example, while 77% of Orthodox Jews say they refrain from handling or spending money on the Sabbath, 22% say they do not. But there is nothing unique about this nonconformity. Virtually no religious group in America displays complete uniformity in surveys, perhaps in part because every large group contains some new members and some marginal members. As Duke University sociologist of religion Mark Chaves has noted, inconsistencies in people’s religious ideas, values and practices are surprisingly common. And, these inconsistencies cut in more than one direction. While the survey finds that 7% of Jews who call themselves Orthodox do not keep a kosher home,  it also finds that 7% of Jews who identify with the Reform movement say they do keep a kosher home.

Intermarriage is practically nonexistent among Orthodox Jews. Fully 98% of the Orthodox respondents who are married have a Jewish spouse. By contrast, among all married Jews in the Pew Research survey, 44% have a non-Jewish spouse, including nearly six-in-ten of those who got married in 2000 or later.