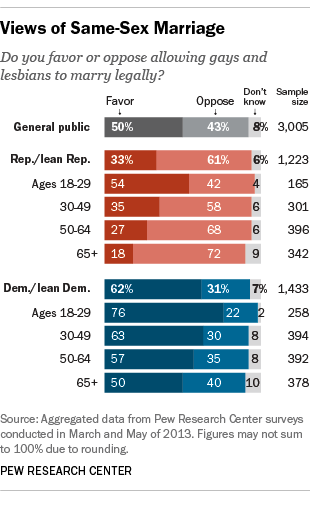 Some of the nation’s religious and socially conservative leaders are gathering in Washington this weekend for the Values Voter Summit, which includes a panel discussion on “The Future of Marriage.” This is the first time the group has met since the U.S. Supreme Court overturned a key provision in the federal Defense of Marriage Act that prevented legally wed same-sex couples from receiving all the federal benefits currently available to married couples of the opposite sex.

Support for same-sex marriage has been growing in recent years, with half (50%) of Americans now in favor and 43% opposed. While support is considerably lower among those who identify as white evangelical Protestant, Republican or politically conservative, support for same-sex marriage has risen even among these groups over the past decade, according to aggregated Pew Research data.

Today, roughly three-in-ten Republicans (29%) and political conservatives (30%) say they support same-sex marriage, compared with 12 years ago, when 21% of Republicans and 18% of conservatives expressed this view. About a quarter (23%) of white evangelical Protestants now say they favor same-sex marriage, compared with 13% in 2001.

Some of this shift in opinion is attributable to members of the Millennial generation (those born since 1980), who express higher levels of support for same-sex marriage than older age groups.