This Sunday, Oct. 6, marks the 40th anniversary of the beginning of the Yom Kippur War. On Oct. 6, 1973, a coalition of Arab forces led by Egypt and Syria launched a surprise attack on Israel on Yom Kippur, the holiest day of the Jewish calendar. After nearly three weeks of conflict, a ceasefire was imposed with Israel holding its borders.

Israel and Egypt signed a peace treaty in 1979, but Israel still does not have diplomatic relations with Syria and several other Arab countries. In addition, of course, Israeli and Palestinian leaders are still trying to work toward a possible peace agreement and two-state solution. 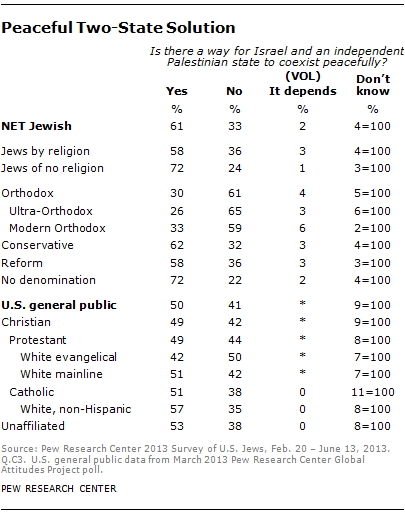 A major new Pew Research Center survey released this week asked American Jews about Israel and the prospects for peace. When asked if there is a way for Israel and an independent Palestinian state to coexist peacefully, 61% of U.S. Jews say yes while 33% say no, which is more optimistic than the U.S. general public (50% yes vs. 41% no) and the Israeli public (50% yes vs. 38% no).

The survey took place between February and June this year, before U.S. Secretary of State John Kerry announced a renewed push for peace talks in July.

Jews in the United States, 43% of whom say they’ve been to Israel and 69% percent of whom say they are at least somewhat attached to the Jewish state, also express concerns about the continued building of Jewish settlements in the West Bank. A plurality (44%) of American Jews say these settlements hurt Israel’s security, while 17% say they help make Israel more secure and 29% say they do not make a difference.