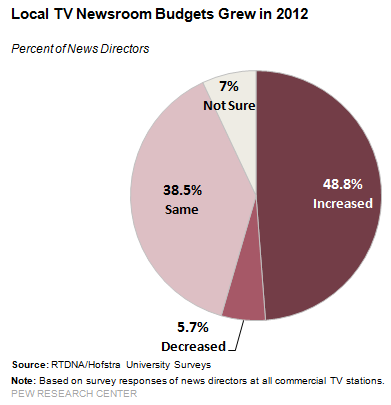 The recent local TV buying spree by companies such as Gannett and the Tribune Company has reinforced the notion that in a challenging media environment, local television stations are commodities that will help newspaper groups gain needed revenue. While these stations have been bolstered by a political advertising windfall and growing retransmission fees, local television also faces some worrisome audience and economic trends.

The latest data to shed light on local television economics comes from the new RTNDA/Hofstra University annual surveys of television newsrooms. The results offer some mixed messages. On the one hand, local TV news remained profitable and newsroom budgets grew in 2012. On the other hand, the data revealed fewer newsrooms, smaller staffs and shrinking salaries in 2012.

• Local TV newscasts are profitable and budgets in newsrooms have grown. About two thirds (66%) of news directors said their stations made a profit on news in 2012, the highest percentage since 1994 when that data was first available. In the vast majority of TV newsrooms, budgets either grew (49%) or held steady (39%) in 2012. Only 6% of news directors said they had to make cuts, compared with 17% the year before.

… and Signs of Decline: 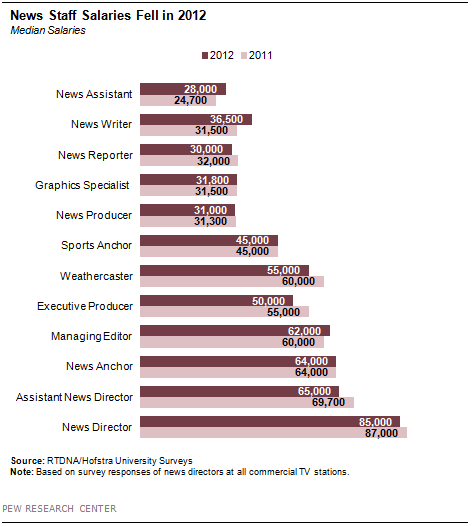 • There were fewer newsrooms in 2012. According to the survey, 717 local stations produced local news in 2012, down eight stations from the year before. Overall, the number of news-producing stations has dropped 8% from 2005, when it peaked at 778 stations.