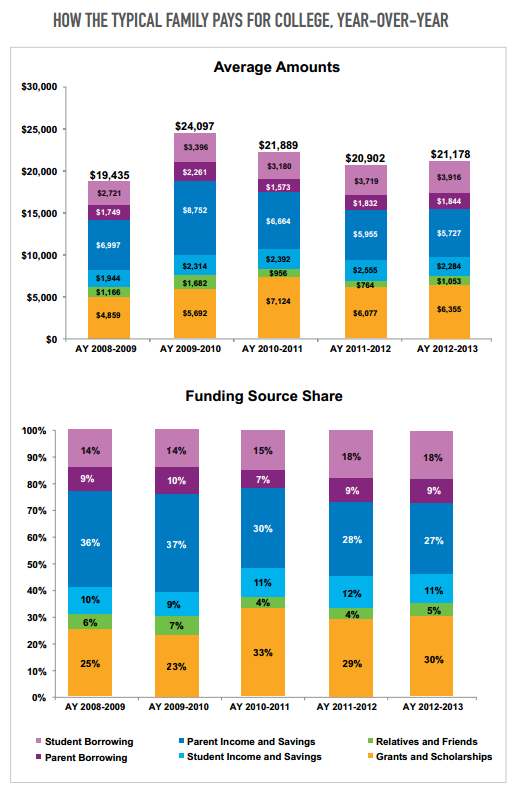 A college education, regardless of its future value (which has been the topic of much discussion of late) is without doubt one of the biggest financial challenges American families will face. A new report from Sallie Mae, the student-loan company, shows how families have met that challenge in recent years.

Though there are many sources of funds for college — from loans to work-study jobs to that Series EE savings bond Aunt Millie gave you for your fourth birthday — a useful approach is to divide them into three groups: parents’ and students’ own resources (savings, income), money you have to pay back (loans), and money you don’t have to pay back (grants, scholarships, gifts).

Looked at that way, American families are relying more on outside sources of college money and less on their own resources. In the 2012-13 academic year, parents’ and students’ own money together made up less than 38% of the average family’s college spending, down from 46% in 2008-09. Parents’ contributions in particular fell sharply, leading Sallie Mae to comment that “one outcome of the recession and the slow economic recovery is the stress that it has placed on parents’ ability to pay for college from their income and savings.”

Another outcome has been greater reliance on grants, scholarships and loans. The “money you don’t have to pay back” category grew to 35% of college costs in the most recent academic year, from 31% four years earlier. Loans accounted for 27% of the average family’s college spending, up from 23% in 2008-09; the average annual total loan amount grew to $5,760 from $4,470. (About one out of five U.S. households owed student debt in 2010, more than double the share two decades earlier, according to a Pew Research Center analysis of government data.)