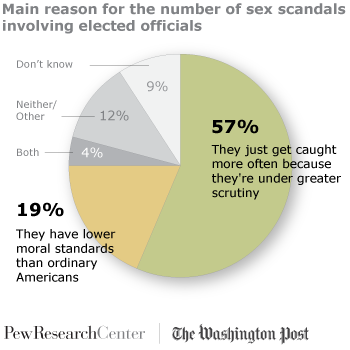 Most Americans attribute the series of public sex scandals in recent years involving politicians more to the heightened scrutiny they face than to lower moral standards among elected officials.

A 57%-majority says elected officials just get caught more often because they are under greater scrutiny. About two-in-ten (19%), on the other hand, say elected officials have lower moral standards than ordinary Americans, according to the latest national survey conducted June 9-12 among 1,002 adults by the Pew Research Center for the People & the Press and The Washington Post. 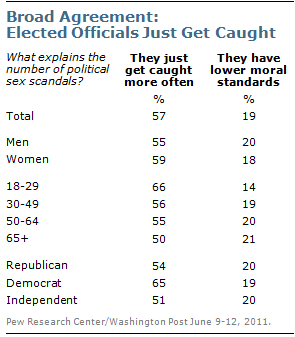 There are only slight differences in opinion across political and demographic groups. Each attributes the number of sex scandals more to the level of scrutiny faced by officials than to lower moral standards by at least a two-to-one margin. For example, 55% of men and 59% of women say that elected officials involved in sex scandals get caught more often because they are under greater scrutiny.

There also is no difference in opinion between those following the current scandal involving Rep. Anthony Weiner very closely and those following this news less closely. Weiner has acknowledged sending sexual messages and photos to at least six women online.

Overall, 12% reject both of the options offered, answering neither or giving other reasons. Among those who offer an explanation, the most frequently cited refer to elected officials’ ego or arrogance.

View the topline questionnaire at pewresearch.org/politics.