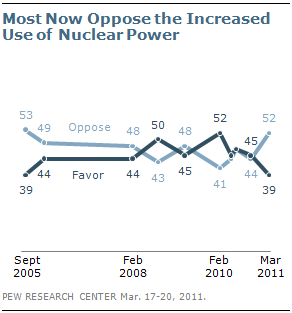 Opinion about expanding the use of nuclear power has fluctuated in recent years. However, the current measure matches a previous low in support for increased nuclear power recorded in September 2005 (39% favor, 53% oppose).

The latest national survey by the Pew Research Center for the People & the Press, conducted March 17-20 among 1,004 adults, finds little recent change in opinions about other energy policies — with one notable exception. With the recent surge in gas prices, support for increased offshore oil and gas drilling continues to rebound.

Currently, 57% say they favor allowing more offshore oil and gas drilling in U.S. waters while 37% are opposed. Last June amid the massive oil spill in the Gulf of Mexico, there was more opposition (52%) than support (44%) for allowing more offshore drilling. Support for increased offshore energy drilling is approaching its pre-Gulf spill level; in February 2010, the public backed increased offshore drilling by about two-to-one (63% to 31%).

The survey shows that substantial majorities continue to support increased federal funding for research on wind, solar and hydrogen technology (74%), spending more on subway, rail and bus systems (61%), and providing tax incentives for the purchase of hybrid vehicles (58%). These measures are virtually unchanged from last October, though there is less support for alternative energy research and spending on mass transit than from 2005 to 2009. 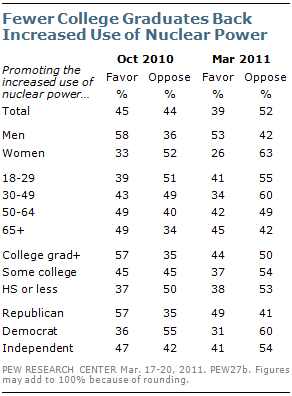 About half of Republicans (49%) favor the expanded use of nuclear power compared with 41% of independents and 31% of Democrats. There were comparable partisan differences in these views last October.

At the time of the Chernobyl nuclear accident in 1986, the public generally viewed U.S. nuclear plants as safer than those in the Soviet Union. In a May 1986 Washington Post/ABC News poll, 55% said that U.S. plants were safer (the question asked about overall safety, not the design of the plants). 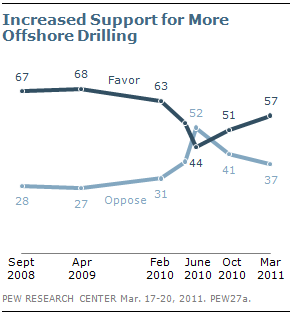 Since last June, support for expanded offshore oil and gas drilling has increased across most demographic and political groups. Still, while support has jumped by nearly 20 points since then among both Republicans and Democrats, there continues to be a sizable partisan divide in these opinions: 81% of Republicans favor allowing more offshore oil and gas drilling in U.S. waters, compared with 54% of independents and 46% of Democrats.

Wide Partisan Gaps over Other Policies

Opinions about other energy policies have changed little since last fall. These views also continue to be deeply divided along partisan lines. While 81% of Democrats and 79% of independents favor increased federal funding for research on wind, solar and hydrogen technology, far fewer Republicans agree (59%).

There also are substantial differences in opinions about spending more on mass transit systems: 72% of Democrats and 64% of independents favor this policy, compared with 46% of Republicans. In both cases, the partisan differences are relatively recent. In 2006, comparable percentages of Republicans, Democrats and independents favored these policies. (For more, see “Little Change in Opinions about Global Warming,” Oct. 27, 2010.)

Read the full report and see the topline questionnaire and survey methodology at pewresearch.org/politics.