Imagine a future in which cancer becomes a memory, ordinary people travel in space, and computers carry on conversations like humans. Now imagine a darker future — a world beset by war, rising temperatures and energy shortages, one where the United States faces a terrorist attack with nuclear weapons. 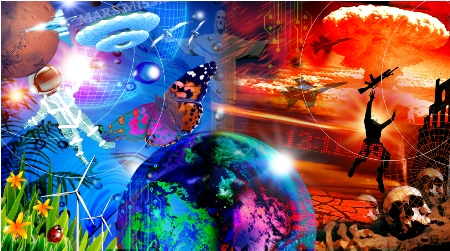 Most Americans think that these developments and many others are likely to unfold over the next 40 years. In the public’s view, this promises to be an era of technological progress. Large majorities expect that computers will be able to carry on conversations (81% say this definitely or probably will happen) and that there will be a cure for cancer (71%). About two-thirds (66%) say that artificial arms and legs will outperform real limbs while 53% envision ordinary people traveling in space.

At the same time, most say that war, terrorism and environmental catastrophes are at least probable by the year 2050. Nearly six-in-ten (58%) see another world war as definite or probable; 53% say the same about the prospect for a major terrorist attack on the United States involving nuclear weapons. An even higher percentage (72%) anticipates that the world will face a major energy crisis in the next 40 years.

The public is evenly divided over whether the quality of the earth’s environment will improve over the next 40 years; as many say the environment is not likely to improve (50%) as say it is (47%). There continues to be a widespread belief that the earth will get warmer in the future, though the percentage expressing this view has declined by 10 points, from 76% to 66%, since 1999.

Moreover, 60% say the world’s oceans will be less healthy 40 years from now than they are today; just 32% say the oceans will be more healthy. The survey was conducted just after the April 20 explosion and fire on the Deepwater Horizon well in the Gulf of Mexico but before the full extent of the massive environmental damage caused by the oil leak became evident.

These are among the findings of a new survey of attitudes and expectations about the future, conducted by the Pew Research Center for the People & the Press and Smithsonian magazine in conjunction with the magazine’s 40th anniversary (see “40 Things You Need to Know about the Next 40 Years“).

The survey, conducted by landline and cell phones April 21-26 among 1,546 adults, was informed by a 1999 survey on the future that explored many of the same topics (see “Optimism Reigns, Technology Plays Key Role,” October 24, 1999).

Despite the current economic slump and the widespread anticipation of crises to come, most Americans remain upbeat about the future, both for themselves and the nation. Today, 64% say they are very or somewhat optimistic about life for themselves and their family over the next 40 years, while 61% are optimistic about the future of the United States. Moreover, 56% say the U.S. economy will be stronger than it is today.

Today’s recession-weary public is less sanguine about the long-term future than it was in May 1999, a time of very strong economic growth. Still, majorities across most demographic and political groups see things getting better — both for themselves and the nation — over the next four decades.

Thinking ahead 40 years, 68% say race relations in the United States will better, which is unchanged from the 1999 survey. And in the wake of the election of the nation’s first African American president, large majorities say that the election of a woman (89%) and Hispanic (69%) will definitely or probably occur.

However, Americans are less optimistic about long-term prospects for public education than they were 11 years ago. About half (49%) say the public education system will improve by 2050, down from 66% who expressed that view in 1999.

The public expresses mixed views about America’s role in the world in 2050. On the one hand, people are divided over whether China will overtake the U.S. as the world’s main superpower — 46% say this will definitely or probably happen, while 49% say it will not. However, most Americans (53%) say that the United States will be less important in the world 40 years from now than it is today; 40% say it will be more important.

The Problem of American Exceptionalism
A Portrait of "Generation Next"
Future of the Internet III: How the Experts See It
Lessons from the 2008 Pew Global Attitudes Survey
Majority Sees U.S. Leadership in Space as Essential
Defining generations: Where Millennials end and Generation Z begins
Growing Share of Americans Say They Plan To Get a COVID-19 Vaccine – or Already Have
Quiz: Are you a Core Conservative? A Solid Liberal? Or somewhere in between?
Most Americans Support Tough Stance Toward China on Human Rights, Economic Issues
In their own words: What Americans think about China