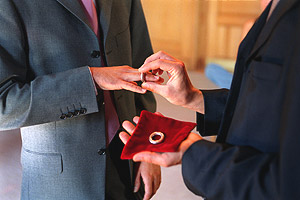 The Massachusetts Supreme Judicial Court ignited a nationwide debate in late 2003 when it ruled that the state must allow gay and lesbian couples to marry. Almost overnight, same-sex marriage became a major national issue, pitting religious and social conservatives against gay-rights advocates and their allies. Over the next year, the ensuing battle over gay marriage could be heard in the halls of the U.S. Congress, in dozens of state legislatures and in the rhetoric of election campaigns at the national and state level.

The debate over same-sex marriage shows no signs of abating. In California, for instance, a high-profile case challenging the constitutionality of a state law banning same-sex marriage was argued before the state’s highest court in early March 2008, with a decision expected by May.1 A similar suit is on the verge of being decided by Connecticut’s Supreme Court. In addition, Florida will hold a referendum during the November 2008 election on a state constitutional amendment that would prohibit gay marriage. Other states, such as Arizona and Indiana, are considering putting similar referenda on the November ballot.

Supporters of same-sex marriage contend that gay and lesbian couples should be treated no differently than their heterosexual counterparts and that they should be able to marry like anyone else. Beyond wanting to uphold the principle of nondiscrimination and equal treatment, supporters say that there are very practical reasons behind the fight for marriage equity. They point out, for instance, that homosexual couples who have been together for years often find themselves without the basic rights and privileges that are currently enjoyed by heterosexual couples who legally marry — from the sharing of health and pension benefits to hospital visitation rights.

Social conservatives and others who oppose same-sex unions assert that marriage between a man and a woman is the bedrock of a healthy society because it leads to stable families and, ultimately, to children who grow up to be productive adults. Allowing gay and lesbian couples to wed, they argue, will radically redefine marriage and further weaken it at a time when the institution is already in deep trouble due to high divorce rates and the significant number of out-of-wedlock births. Moreover, they predict, giving gay couples the right to marry will ultimately lead to granting people in polygamous and other nontraditional relationships the right to marry as well.

The American religious community is deeply divided over the issue of same-sex marriage. The Catholic Church and evangelical Christian groups have played a leading role in public opposition to gay marriage, while mainline Protestant churches and other religious groups wrestle with whether to ordain gay clergy and perform same-sex marriage ceremonies. Indeed, the ordination and marriage of gay persons has been a growing wedge between the socially liberal and conservative wings of the Episcopal and Presbyterian churches, leading some conservative congregations and even whole dioceses to break away from their national churches.2

Polls show that frequency of worship service attendance is a factor in the opposition to gay marriage. According to an August 2007 survey by the Pew Forum on Religion & Public Life and the Pew Research Center for the People & the Press, 55% of Americans oppose gay marriage, with 36% favoring it. But those with a high frequency of church attendance oppose it by a substantially wider margin (73% in opposition vs. 21% in favor). Opposition among white evangelicals, regardless of frequency of church attendance, is even higher — at 81%. A majority of black Protestants (64%) and Latino Catholics (52%)3 also oppose gay marriage, as do pluralities of white, non-Hispanic Catholics (49%) and white mainline Protestants (47%). Only among Americans without a religious affiliation does a majority (60%) express support.

However, a 2006 Pew survey found that sizable majorities of white mainline Protestants (66%), Catholics (63%) and those without a religious affiliation (78%) favor allowing homosexual couples to enter into civil unions that grant most of the legal rights of marriage without the title. The general public also supports civil unions (54% in favor vs. 42% in opposition). As with gay marriage, white evangelicals (66%), black Protestants (62%) and frequent church attenders (60%) stand out for their opposition to civil unions.4

The same-sex marriage debate is not solely an American phenomenon. Many countries, especially in Europe, have grappled with the issue as well. And since 2001, four nations — the Netherlands, Belgium, Spain and South Africa — have legalized gay marriage. In addition, the provinces of Ontario, British Columbia and Quebec in Canada now allow same-sex couples to legally marry.5

Gay Americans have been calling for the right to marry, or at least to create more formalized relationships, since the 1960s, but same-sex marriage has only emerged as a national issue in the last 15 years. The spark that started the debate came from Hawaii in 1993 when the state’s Supreme Court ruled that an existing law banning same-sex marriage would be unconstitutional unless the state government could show that it had a compelling reason for discriminating against gay and lesbian couples.

Even though this decision did not immediately lead to the legalization of gay marriage in the state (the case was sent back to a lower court for further consideration), it did spark a nationwide backlash. Over the next decade, legislatures in more than 40 states passed what are generally called Defense of Marriage Acts (DOMAs), which define marriage solely as the union between a man and a woman. Today, 42 states have DOMAs on the books. In addition, in 1996 the U.S. Congress passed, and President Bill Clinton signed, a federal DOMA that defines marriage for purposes of federal law as the union between a man and a woman. The law also asserts that no state can be forced to legally recognize a same-sex marriage performed in another state.

Amid widespread efforts in many states to prevent same-sex marriage, there was at least one notable victory for gay-rights advocates during this period. In 1999, the Vermont Supreme Court ruled that gay and lesbian couples are entitled to all of the rights and protections associated with marriage. However, the court left it up to the state legislature to determine how to grant these rights to same-sex couples. The following year, the Vermont legislature approved a bill granting gay and lesbian couples the right to form civil unions. Under Vermont’s law, same-sex couples who enter into a civil union accrue all the rights, benefits and responsibilities of marriage, though they are not technically married.

The Goodridge Case and its Aftermath

Although the debate over gay marriage for a while seemed to fade from the public eye, the issue was suddenly and dramatically catapulted back into the headlines in November 2003 when the highest state court in Massachusetts ruled that the state’s constitution guaranteed gay and lesbian couples the right to marry. Unlike the Vermont high court’s decision four years earlier, the ruling in this case, Goodridge v. Massachusetts Department of Public Health, left the legislature no options, requiring it to pass a law granting full marriage rights to same-sex couples.6

In the days and weeks following the 2003 Massachusetts decision, some cities and localities — including San Francisco, CA; Portland, Ore.; and New Paltz, N.Y. — began issuing marriage licenses to gay couples. Television images of long lines of same-sex couples waiting for marriage licenses outside of government offices led some social conservatives and others to predict that same-sex marriage would soon be a reality in many parts of the country. But these predictions proved premature.

To begin with, all the marriage licenses issued to gay couples outside of Massachusetts were later nullified since none of the mayors and other officials involved had the authority to grant marriage licenses to same-sex couples. More significantly, the Massachusetts decision led to another major backlash at the federal and state level. In the U.S. Congress, conservative lawmakers, with support from President Bush, attempted to pass an amendment to the U.S. Constitution that would have banned same-sex marriage nationwide. But efforts to obtain the two-thirds majority needed in both houses to pass the amendment fell short in 2004 and again in 2006.

Gay-marriage opponents had better luck at the state level, where voters in 13 states passed referenda in 2004 amending their constitutions to prohibit same-sex marriage. Ten more states took the same step in 2005 and 2006, bringing the total number of states with amendments prohibiting gay marriage to 26. So far, voters in only one state — Arizona in 2006 — have rejected a constitutional ban on same-sex marriage. And only New Mexico, New York and Rhode Island have no law either banning or allowing gay marriage.

The same-sex marriage debate may have had an impact on the outcome of the 2004 presidential election. Ohio, which in 2004 was holding a referendum on a constitutional ban on gay marriage, was the state that ultimately gave President Bush the electoral votes he needed to beat Sen. John Kerry. Bush, who narrowly won the state, opposed gay marriage and supported a federal constitutional amendment banning it. Kerry also came out against gay marriage but opposed the constitutional ban and supported civil unions. It has been noted that the president’s share of the black vote in Ohio (16%) was more than his share of the black vote nationwide (11%). Many political analysts attribute Bush’s narrow victory in Ohio at least in part to the fact that some pastors, particularly black pastors, made same-sex marriage a campaign issue, prompting more of their congregants to vote for Bush.

Most of the states that approved constitutional amendments banning gay marriage are in the more socially conservative South and Midwest. In more socially liberal states, the cause for same-sex marriage has fared somewhat better. Since 2005, three Northeastern states — Connecticut, New Hampshire and New Jersey — have joined Vermont and passed laws authorizing civil unions. In addition, Maine, Oregon, Washington state and California have enacted domestic partnership statutes that grant many, though not all, the benefits of marriage to registered domestic partners. In 2006, the California legislature also passed legislation authorizing same-sex marriage — so far the only state legislature to do so. But the measure was vetoed by Gov. Arnold Schwarzenegger, who said that the issue was best left to the courts.

But state high courts have, so far, declined to follow Massachusetts’ lead and mandate same-sex marriage. Indeed, in the last two years, a number of top courts in more socially liberal states –New York, Washington state and Maryland — have rejected arguments in favor of gay unions. Thus Massachusetts remains the only state that allows same-sex marriage; more than 10,000 gay and lesbian couples have married there since 2004.

The immediate future of the same-sex marriage debate appears, to a large degree, to mirror the recent past. On one hand, gay-rights advocates are now pushing for court victories in California and Connecticut. Meanwhile, opponents are looking to the November 2008 election, seeking to have constitutional gay-marriage bans placed on the ballot in as many as 10 states, including Arizona and Indiana. No one knows how these various efforts will ultimately end. But it is a safe bet that the issue will likely remain a part of the nation’s political and legal landscape for years to come.

1See From Griswold to Goodridge: The Constitutional Dimensions of the Same-Sex Marriage Debate.

3See: “Changing Faiths: Latinos and the Transformation of American Religion,” Pew Forum and Pew Hispanic Center, conducted in 2006 and published in 2007.

6See From Griswold to Goodridge: The Constitutional Dimensions of the Same-Sex Marriage Debate.