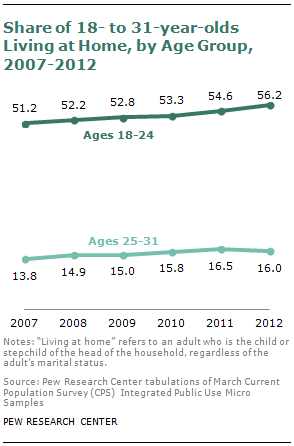 While older Millennials are much more likely than their younger counterparts to have left the parental nest and struck out on their own, rising shares of both older and younger age groups are living with their parents since the onset of the Great Recession. In 2012, 56% of 18- to 24-year-old Millennials lived in their parents’ home, up from 51% in 2007. By comparison, 16% of adults ages 25 to 31 were living with their parents in 2012, up from 14% in 2007.2

These figures only count the share of Millennials currently living in their parents’ household. A 2011 Pew Research Center survey found that 29% of 25- to 34-year-olds either lived with their parents at the time of the survey or had moved back in (i.e., “boomeranged”) with their parents temporarily in the recent past because of the economy (Parker, 2012).

Several factors are driving the recent upswing in young adults living at home. 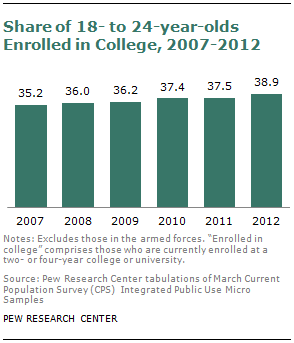 Millennials have pursued college to a greater extent than earlier generations of young adults, and rates of college enrollment have risen since 2007. In March 2012, 39% of 18- to 24-year-old Millennials were enrolled in college. By comparison, only 35% of 18- to 24-year-olds were enrolled in college in 2007.3 College enrollment is relevant for young adult living arrangements because in the Current Population Survey persons residing in college dormitories are considered to be living in their parental home. Greater college enrollment expands the ranks of those living at home in two ways: some college students live in dorms (and are counted as living at home) and some live at home and pursue college.4 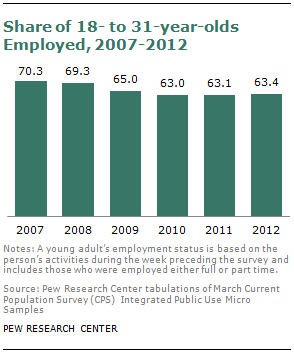 Young adults’ ability to strike out on their own and move out of the parental home depends in part on employment prospects and labor market opportunities (Card and Lemieux, 2000; Bell et al., 2006). One avenue by which young adults adjust to difficult labor market conditions is to move back home.

Since the recession began, fewer young adults have been getting married (Fry, 2012). Consequently, only 25% of Millennials were married in 2012, a decline from the 30% of 18- to 31-year-olds who were married in 2007. Relatively few married Millennials reside in their parents’ home (3% in 2012), so the downturn in nuptials may be associated with an increase in living at home. 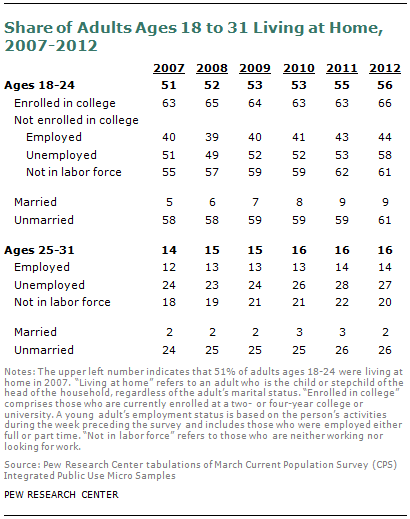 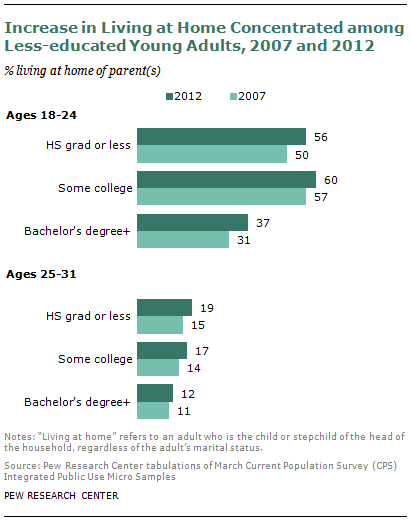 There is some evidence that the increase in living at home has been concentrated among less-educated young adults. Among 25- to 31-year-olds with no education beyond high school, 19% lived at home in 2012. In 2007, 15% of these lesser educated young adults lived at home. By contrast, among 25- to 31-year-olds with a college education, there has been no statistically significant increase in living at home since 2007 (from 11% to 12%).

Next: Other Demographic Patterns
← Prev Page
Page1You are reading page2Page3Page4Page5
Next Page →