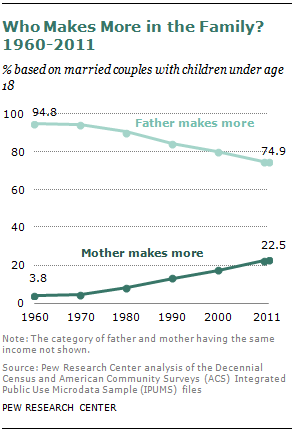 Married mothers are more likely than before to be the primary provider in the family. Among married couples with children, the proportion in which the wife’s income tops her husband’s has increased from about 4% in 1960 to 23% in 2011.16 By contrast, the share of couples in which the husband makes more than his wife has fallen about 20 percentage points, from 95% in 1960 to 75% in 2011.17

One factor directly related to mothers’ rising income is their increased employment rate. The share of employed married mothers has increased dramatically since the 1960s, which results in more families with two working parents.18 In 2011, nearly six-in-ten married couples with children had two incomes, up from a quarter in 1960. The share in which the father is the breadwinner and mother is the homemaker, by contrast, has fallen from about 70% in 1960 to 31% in 2011.

Rising education levels among women can also contribute to the increased share of married mothers who out-earn their husbands. Even though most people are married to someone with a similar educational background, the number of couples in which the wife is better educated than her husband has increased. Among all married couples with children in 1960, about 16% had a husband who was better educated than his wife and the opposite was true for 7% of couples. About five decades later, the pattern has flipped: In about 23% of couples, it is the wife who has attained a higher education level than her husband, and among 17% of families the husband is better educated than the wife.19 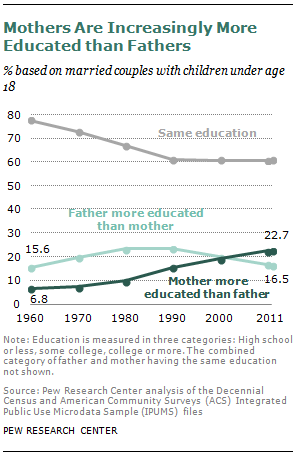 Despite the fact that mothers are generally more educated than their husbands today, a majority of fathers still earn more than their wives. The share of couples in which the husband’s income exceeds the wife’s was about 75% in 2011. This in part reflects different employment rates between married parents: about 65% of married mothers were employed in 2011, compared with about 90% of fathers. But it also reflects different earning patterns among men and women. Even in dual income families in which both fathers and mothers are working, 70% of these families consist of fathers who earn more than mothers.20

Characteristics of Married Mothers Who Out-earn their Husbands

Married mothers who out-earn their husbands are a highly educated group. Nearly half (49%) have a college degree or higher. This share is significantly higher than it is among women whose husbands are the primary breadwinners (37%) and among those who make the same level of income as their husbands (39%). 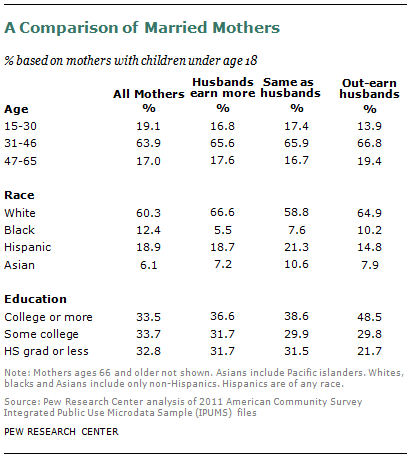 Compared with married mothers whose income is less than or equal to that of their husbands, mothers who out-earn their husbands are somewhat older. About 14% of them are ages 30 or younger, and a majority (67%) are in their 30s through age 46, an additional 19% are ages 47 to 65. By contrast, about 17% of mothers in the other two groups are ages 30 or younger, and their shares of adult ages 47 to 65 are lower. In addition, children of mothers who out-earn their husbands are slightly older than those in other type of families. The average age of youngest child is 7.6 for mothers who are the primary breadwinner, 7.2 for families in which fathers are the primary breadwinner, and 7.3 for families with both parents equally contributing to the family income. 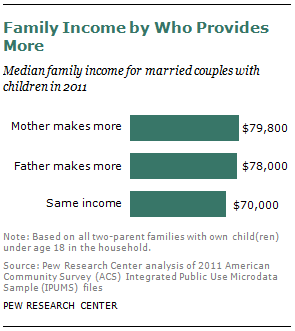 Income and Education among Newlyweds 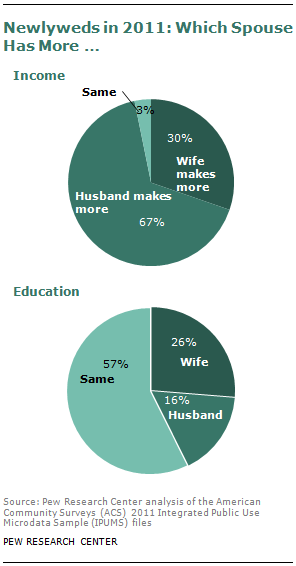 The rise of married mothers who out-earn their husbands is a part of a broader trend of wives’ increasing economic power relative to their husbands. Today, in nearly one-quarter of married couples with or without children (24%) the wife is the primary breadwinner.21

The share of “breadwinner wives” is even higher among recently married couples. In 2011, three-in-ten newlywed couples consisted of a bride whose income was higher than that of her husband.

Today’s newlywed women are generally better educated than their husbands. In 2011, the wife’s education level was higher than the husband’s in 26% of newlywed couples. In only 16% of couples did the husband’s educational attainment exceed that of his wife. For a majority of newlyweds (57%), the husband and the wife had a similar level of education.

Despite these education gains for women, even among newlywed couples, the most common situation remains for the groom to earn more than the bride (67% of couples fell into this category in 2011).

Economics and Personal FinancesWork and EmploymentHousehold and Family StructureGenderParenthoodFamily RolesIncome
Defining generations: Where Millennials end and Generation Z begins
Quiz: Are you a Core Conservative? A Solid Liberal? Or somewhere in between?
Key findings about U.S. immigrants
About One-in-Four U.S. Hispanics Have Heard of Latinx, but Just 3% Use It
Views on Race in America