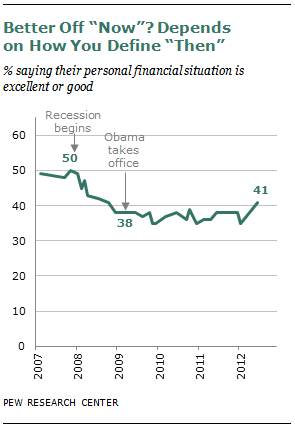 The Pew Research Center has been tracking personal financial well-being for years. The trend since 2007 helps explain why the Obama and Romney campaigns talk about this issue in such different terms. On the one hand, Americans are clearly feeling more pinched than they were before the recession began. The Pew Research Center’s November 2007 survey found 50% saying they were in excellent or good shape financially. In June of this year, 41% rated their personal finances as excellent or good.

However, most of the decline in positive views occurred before Obama took office; there has been little change since then. Between November 2007 and December 2008 the share of Americans who said they were in good financial shape fell 12 points to just 38%, and has neither improved nor worsened substantially over the past three-and-a-half years. 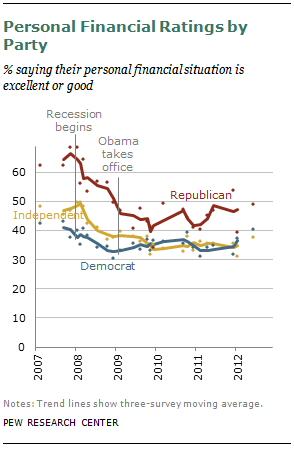 Republicans consistently rate their personal finances more positively than do Democrats or independents, largely reflecting Republicans’ higher average income levels. But the gap has narrowed since the start of the recession in December 2007, as Republicans have come to view their financial situations less positively. 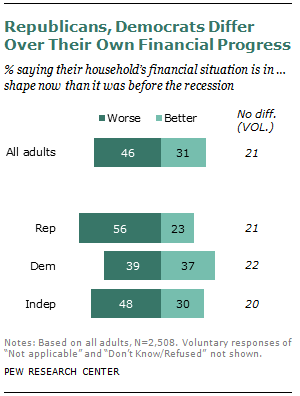 Nonetheless, Americans remain, on balance, optimistic about their personal finances. Throughout this economically stressful period, half or more have said they expected their financial situation to improve in the year to come. In the June 2012 survey, 63% said they thought their financial situation would improve; that figure had fallen as low as 51% in April 2011, and stood at 54% shortly after Obama took office. 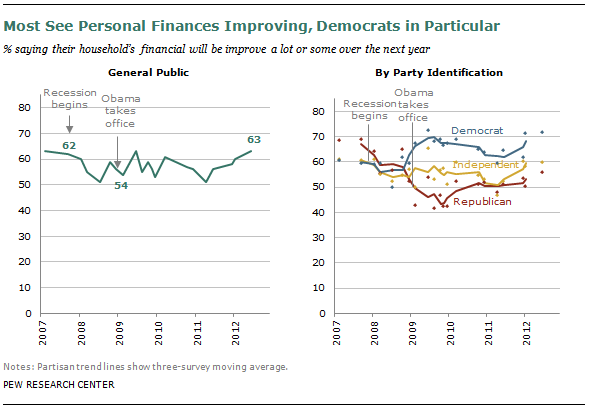