Long-term unemployment takes a much deeper toll than short-term unemployment on a person’s finances, emotional well-being and career prospects, according to a new Pew Research Center survey that explores the attitudes and experiences of workers who have lost jobs during the Great Recession.

Of those who have experienced an unemployment spell of at least six months, more than four-in-ten (44%) report that the recession has caused “major changes” in their lives. By comparison, fewer than a third (31%) of those who had been unemployed less than six months and 20% of adults who were not unemployed during the recession say they were similarly affected.

To measure the impact of unemployment during the Great Recession, the Pew Research Center interviewed 810 adults ages 18 to 641 who are currently unemployed or who were jobless sometime since the recession officially began in December 2007. They were part of a nationally representative survey of 2,967 adults conducted May 11-31, 2010.

Pew Center researchers also analyzed recent employment data to create a demographic portrait of the long-term unemployed.2 According to the Bureau of Labor Statistics (BLS), the median duration of unemployment stood at 25.5 weeks in June 2010, meaning half of the unemployed — the largest proportion since World War II — have been looking for work for six months or more. The previous high, in May 1983, was 12.3 weeks, less than half the level today. The Center’s demographic analysis finds that the median duration is highest among older workers, blue-collar workers and black workers. However, all workers, regardless of race or ethnicity, age, gender, nativity or occupation, have experienced a sharp increase in long-term unemployment during the recession. 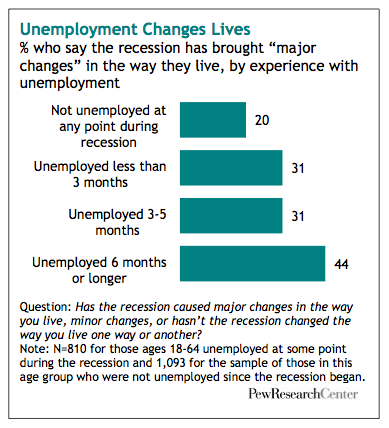 Together, the survey and analysis of employment data document how a prolonged period of joblessness can strain household budgets, test personal relationships, force changes in career plans and erode self- confidence. Key findings include: 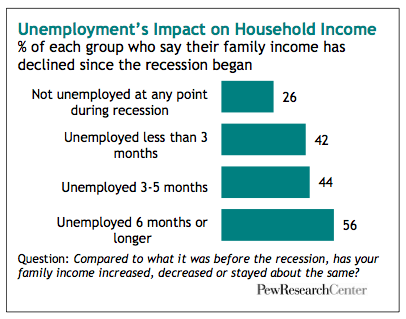 While the long-term unemployed have suffered the most during the Great Recession, the survey found that shorter spells of unemployment also have been painful for many Americans and their families 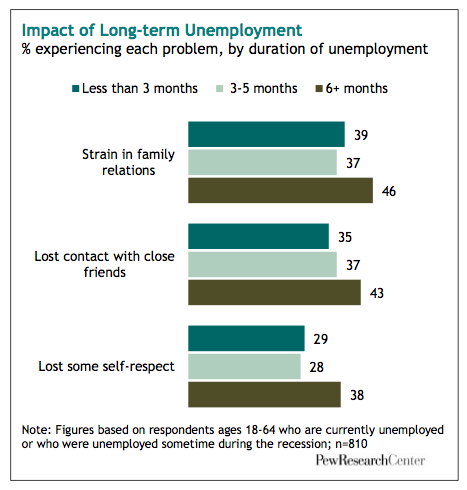 For example, a third of all long-term unemployed (33%) say they have had problems paying their rent or mortgage — identical to the proportion of those unemployed less than three months who experienced difficulty paying for housing. This proportion is more than double the share of Americans who have not been jobless at any point during the recession but who have had difficulty paying for housing during the recession (16%). 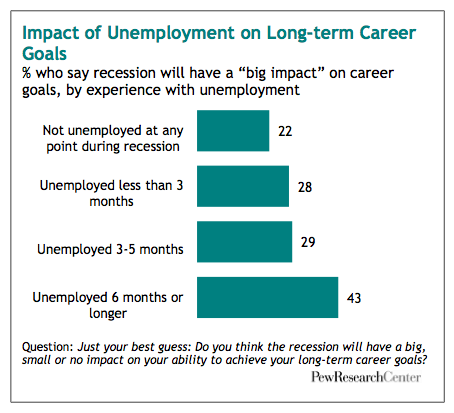