Ask cigarette smokers why they light up and one answer you’re likely to hear is that it relieves stress.1 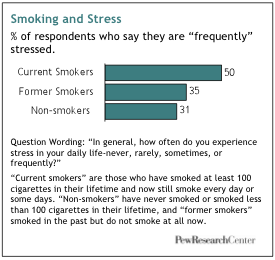 But if that’s the goal, it’s not at all clear that cigarettes deliver the goods. Half (50%) of all smokers say they “frequently” experience stress in their daily lives, compared with just 35% of those who once smoked and have now quit and 31% of those who never smoked, according to a Pew Research Center Social & Demographic Trends survey conducted June 16-July16, 2008 among a nationally representative sample of 2,250 adults.

Psychologists, physiologists and neuroscientists are better situated than public opinion researchers to supply answers. Nevertheless, the Pew Research survey sheds some new light on the subject by allowing for a range of comparisons among current smokers, former smokers and non-smokers on matters related to stress, happiness, health and life satisfaction.

The survey findings come at a time when the share of adults in the United States who smoke appears to have stabilized following a half-century decline. The most recent data from the Centers for Disease Control show that for the period of January through June 2008, the share of current smokers in the adult population was 20.8%, a bit higher than in 2007, when it was 19.7%.

Moreover, the one-in-five adults who smoke now have a new reason to feel stressed. On April 1, the U.S. government imposed its largest-ever tax increase on cigarettes; Uncle Sam’s take on a pack of cigarettes shot up to $1.01 from 39 cents. (The Pew Research survey was taken well before these taxes went up.)

The Pew Research finding of a strong correlation between smoking and stress raises an obvious question: Is the stress a by-product of the smoking or of other unrelated factors?

One way to look for answers is by conducting a multivariate regression analysis.2 Ours finds that, even after controlling for the basic demographic characteristics of respondents — including gender, age, race, education, income, marital status, and parental status — current smokers are still more likely than non-smokers and quitters to report being frequently stressed.

However, our survey did not ask respondents about their psychological characteristics, so we were unable to weigh the impact of those traits on stress levels. Had we done so, it is possible we would have found that the independent effect of smoking on stress was weak or non-existent. 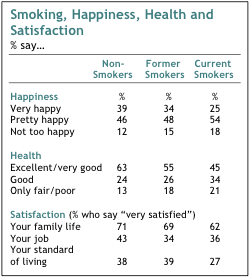 The survey also finds that smokers are less happy and less healthy than both non-smokers and quitters.

About a quarter of current smokers say that they are very happy, compared with more than a third of quitters and almost four-in-ten non-smokers.

Consistent with what decades of public health research shows, smokers also report being in poorer health than non-smokers and quitters. Fewer than half of smokers (45%) say that their health is excellent or very good, compared with 63% of non-smokers and 55% of former smokers.

Who Smokes and Who Doesn’t?

According to the Pew Research survey, more than half of adults (54%) have either never smoked or smoked fewer than 100 cigarettes in their lifetime. Another 22% are former smokers or “quitters,” and 24% are currently smoking. (This 24% figure is slightly higher than the 2l% figure for 2008 reported by the CDC.3)

Women are more likely than men to be non-smokers (59% vs. 49%), the Pew survey finds. However, a quarter of men have quit smoking, compared with just 18% of women, which explains the nearly equal rates of current smoking within each gender.

Older adults are less likely than younger adults to be current smokers. Some 31% of 18-29 year olds are smokers, compared with just 11% of those ages 65 and older.

However, the younger age group also has a bigger share of people who never smoked. Six-in-ten adults under age 30 have never smoked or have not smoked more than 100 cigarettes in their lives. But among people who are ages 50 or older, only somewhere between four-in-ten and half never smoked.

Hispanics and blacks are both more likely than whites to be non-smokers. More than six-in-ten Hispanics and blacks have never smoked, compared with about half of whites.
High family income and high levels of education are associated with a low occurrence of smoking, and so is being married. Also, conservatives are more likely than liberals to be non-smokers (56% vs. 50%).

Region matters too. Compared with other regions of the country, the Midwest has the highest rate of smoking. Nearly three-in-ten (28%) Midwesterners are currently smoking, compared with only one in five Westerners.

Who Are the Quitters?

Nearly half of Americans have smoked at some time in their lives. But once a smoker, not always a smoker: Half of the men and 45% of women who have ever smoked have now quit.

Higher education and higher family income are related to a higher rate of quitting smoking. Married people also are more likely to quit than are those who are not married.

Liberals are more likely than conservatives to continue smoking once they become a smoker. About 63% of liberal smokers still smoke, compared with fewer than half of conservatives.

Among city dwellers, 57% of people who have ever smoked continue smoking, while only 48% of their suburban counterparts do so.

The findings about who is most likely to quit smoking are further confirmed by a multivariate regression analysis.4 Holding all other variables constant, men are more likely than women to quit smoking. Being older, married and a college graduate are also independently related to a higher probability of quitting cigarettes, as is being a conservative rather than a liberal.

Just as there are demographic differences in who smokes, there are demographic differences in who is more likely to feel stressed in their daily lives. In terms of age cohorts, the 30-to-49-year-olds are the most stressed: almost half report that they are “frequently” stressed. Nearly four-in-ten 50-to-64-year-olds say they are frequently stressed. Those over age 65 are the least stressed age group: only about one-in-five report being frequently stressed.

Apparently, money doesn’t bring relief from stress, nor does higher education. Those with an annual family income of $100,000 or more are more likely to be frequently stressed (44%) than are adults with lower annual incomes. And compared with people with a high school education or less, college grads are less likely to report “rarely” or “never” experiencing stress.

The survey finds no linkage between marital status and daily stress. However, it does find a linkage between parenting status and daily stress. More than four-in-ten parents who have children under age 18 say they frequently experience stress in their daily life, compared with about one third of those who have no children or who only have adult children.

Finally, people’s ideology (but not their party ID) is linked to stress. Liberals are more likely than conservatives or moderates to report being frequently stressed in daily life. 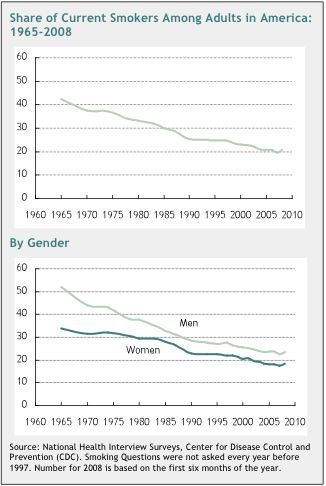 According to Center for Disease Control and Prevention (CDC), cigarette smoking has decreased substantially since the 1960s. However, the rate of current smoking among adults has stabilized since 2004, averaging about 20%-21%. The most recent CDC data show that for the period of January through June 2008, the percentage of current smokers is 20.8, a bit higher than in 2007, when 19.7% of adults smoked.

While the rate of current smoking is lower among women than men, this gender gap has narrowed over time. In 1965, 34% of adult women smoked, compared with 52% of adult men. This gap gradually narrowed until reaching about 5% inthe mid-1980s; it has remained in that range ever since. It’s not that women are smoking more: rates of smoking for both men and women have declined since the 1960s. The narrowing gender gap since 1965 is mainly due to the fact that smoking has declined at a faster rate among men than among women.