Who makes better candidates — moms or dads? And more broadly, what impact do both the gender and parenting status of candidates have on their chances to win an election? An experimental survey by the Pew Research Center suggests that the answer depends, in no small part, on whether you are a Republican or a Democrat. 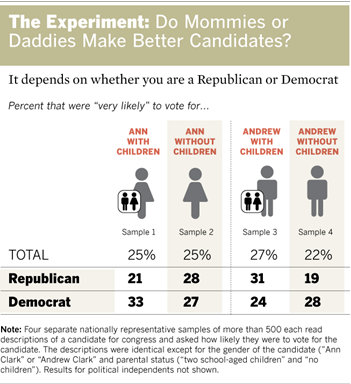 The Pew experiment was conducted earlier this summer, before the selection of Alaska Gov. Sarah Palin as the Republican vice-presidential candidate scrambled much of the conventional political wisdom about who’s on which side of the decades-old “Mommy Wars” over the competing demands of career and motherhood.

The online test was designed to give respondents no indication that it was about gender or parenting status. It found that Republicans are significantly less likely to vote for a candidate who is a mother of young children than one who is a father of young children, other factors being equal. Barely one-in-five (21%) Republicans said they were very likely to support a candidate for U.S. Congress who was the mother of school-aged children, while 31% said they would support a father who had the identical personal and career profile.

Among Democrats, gender and parenthood had the opposite effect: Democrats were significantly more likely to vote for a candidate for Congress who is the mother of small children than to support an identical candidate who is the father of small children (33% vs. 24%). Democratic women in particular more strongly supported Ann the mother than Andrew the father (36% vs. 19%). Among Democratic men, neither gender nor parenthood made a difference.

Taken together, the findings suggest women with young children pay a “mommy penalty” among Republicans if they run for Congress. Among Democrats, by contrast, it’s the fathers of small children who are at a disadvantage and it’s the mothers who are more likely to be strongly supported.

These results echo the findings of other Pew surveys which show that Republicans — who are more likely to embrace traditional social values — are far more troubled than Democrats by the long term trend toward mothers of young children working outside the home. In a 2007 survey, for example, some 53% of Republicans described this trend as bad for society, compared with just 38% of Democrats who felt the same way.

But these surveys were conducted before the dramatic entrance onto the national scene of Palin, who suddenly has become the most famous working mom in the country. The enthusiastic initial response to her candidacy — especially among Republicans and among women — raises an intriguing political question for the fall campaign: might the public’s long held attitudes on these “mommy wars” matters bend under the force of Palin’s compelling personal saga?

In the experimental Pew Research Center survey conducted from mid June to mid July, four separate random samples of more than 500 registered voters each — a total of 2,300 voters overall — were asked to read an online profile of a hypothetical candidate for U.S. Congress in their district.1 The profiles all described the candidate as a lawyer, first-time candidate, a churchgoer, a member of the local Chamber of Commerce, an environmentalist, a volunteer at a local homeless shelter and a member of the same party as the survey respondent. Respondents in each sample were then asked to indicate what they liked and didn’t like about the candidate, whether they considered the candidate qualified and whether they were inclined to vote for the candidate. There was no indication that this was a survey about possible hidden bias against women or mothers.

In the test, Ann Clark and Andrew Clark got about the same number of “votes” from their respective samples; regardless of whether they were identified as being the mother or father of school-aged children.

Voters were as likely to strongly support Ann the mother (25%) and Andrew the father (27%) as they were as they were to strongly support a childless Ann (25%) or Andrew (22%). One significant difference did emerge: a larger proportion of voters expressed neutral or negative views (5 or less on the 10-point scale) about supporting a childless Andrew than had these same feelings about Andrew the father (40% vs. 32%).

Results from other questions produced generally complementary findings. No statistically significant differences emerged when respondents were asked their overall impression of the candidates. More than a third of voters had a very favorable view of Ann the mother or Andrew the father (10, 9 or 8 on a 10-point scale that ran from “very favorable” to “very unfavorable”). And a roughly similar proportion of voters have a positive impression of a childless Ann (32%) or Andrew (31%). Similarly, voters offered about the same overall evaluation of the candidate’s qualifications for Congress regardless of whether they were read a description of Ann the mother (26% rated her as very qualified), a childless Ann (23%) or Andrew (25%), though the difference between views of Andrew the father (30%) and the childless Ann were significant.

One other interesting pattern emerges from these data, though its significance is unclear. A childless Andrew was generally viewed less positively across all three measures. These differences fell short of achieving statistical significance, though the persistence of this pattern suggests that some small but potentially important differences may exist.

The absence of overall differences is deceptive — the product of equal but opposing strains of public opinion that run though key political and demographic subgroups.

Notably, gender and parenthood tug in exactly opposite directions within the two major parties***. More Republicans said they would be very likely to vote for Andrew the father than Ann the mother (31% vs. 20%)2, all other factors being equal. Republicans also were more likely to support the hypothetical Andrew if he were a father than if he did not have children (31% vs. 19%) — a result largely driven by Republican men, who were nearly three times more likely to strongly endorse Andrew the father than the childless Andrew (36% vs. 13%).

Overall, the results from the experiment suggest that gender and parental status matter more for men than for women. Male voters prefer Andrew the father (29%) to a childless Andrew (20%). But female voters are largely unaffected by either a candidate’s gender or parental status. Regardless of whether the candidate was an Andrew or an Ann, or whether they had two small children or none, about a quarter of women said they would be strongly inclined to vote for the candidate, all other factors being equal. Some differences by age also emerged from the test. Young people were significantly less inclined to support a childless Ann than either a man or woman with children at home. And fully a third of all those between the ages of 45 to 59 were more apt to support Ann if she did not have children than Ann the mother or a childless Andrew. Also, voters who had attended college but did not graduate were significantly less likely to back a male candidate without small children (14%) than a woman or man with young children (28% and 26%, respectively).

Gender and Politics: What Other Pew Surveys Have Found

The candidacies in 2008 of Palin and Sen. Hillary Clinton have brought to center stage longstanding and wide-ranging cultural debates about the role of women in modern society. In addition to this online survey experiment, the Pew Research Center conducted nationwide surveys in 2008, 2007 and 2005 that explored public attitudes on matters related to gender, power, motherhood, work and family. Among the findings: