When respondents were asked to choose between protecting the environment and job creation, the balance of opinion landed squarely on the side of environmental protection. (This survey was conducted before the coronavirus pandemic and resultant economic strains in many of these publics.)

Further, as people think about energy issues, many more would prioritize expanding renewable energy production over that for fossil fuel energies. Views about specific energy sources underscore this pattern, with strong majorities in favor of expanding the use of wind, solar and hydropower sources and much less support, by comparison, for energy sources such as oil or coal.

People’s views on climate, environment and energy issues tend to align with their political ideology. Those who place themselves on the left are more inclined to see climate change as a serious problem and to think their government is doing too little to address it. Left-leaning adults are especially inclined to prioritize protecting the environment or creating new jobs and to think it more important to increase renewable energy production over that for fossil fuels.

There is also a tendency for environmental and energy priorities to vary with age. In particular, a larger share of younger adults than older ones across most of these publics prioritize protecting the environment even it means harm to economic development.

Majorities see at least some effects of climate change where they live; a median of 58% say government action to address climate change is insufficient 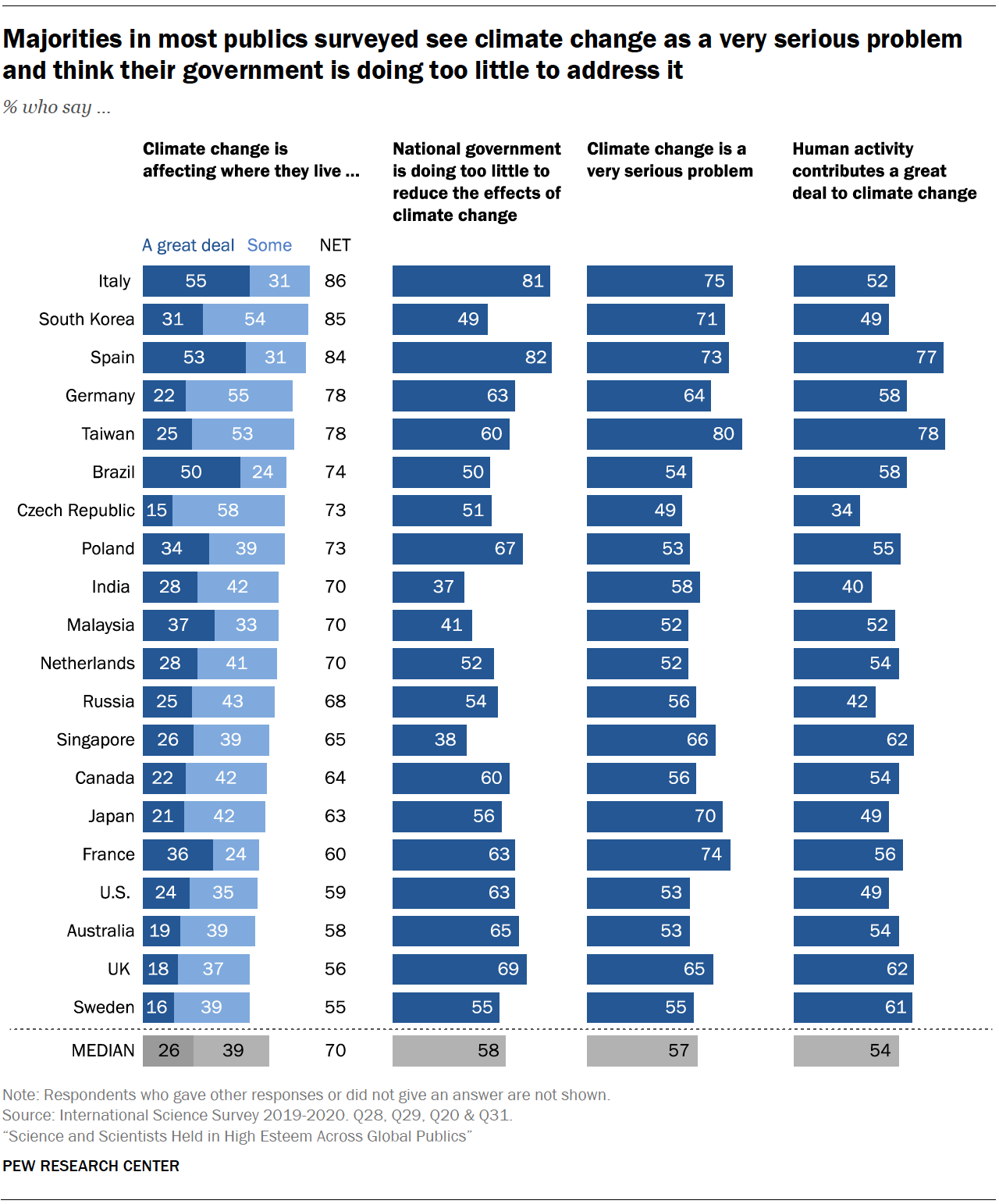 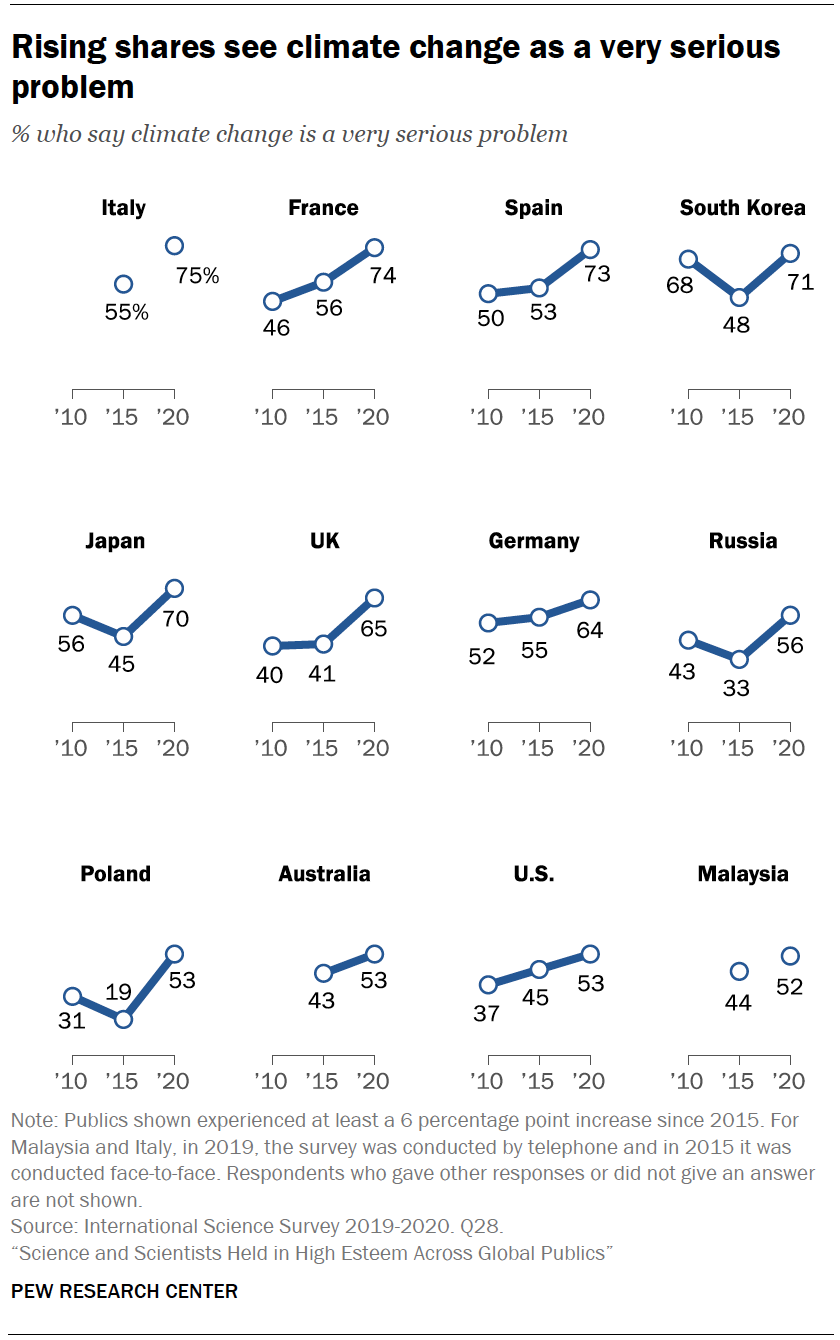 A 2015 Center survey found the U.S. and China stand apart from other nations for their relatively low levels of concern about climate change. In the new survey, too, Americans stand out for having a higher share who say that climate change is not too serious or not a problem (25%).

These findings are consistent with past Pew Research Center surveys using different question wording, which showed that global perceptions of climate change as a threat increased between 2013 and 2018. In the U.S., public concern about climate change has also gone up over time; however, concern has risen primarily among Democrats and not Republicans.

Global perspectives on climate are strongly aligned with people’s ideological leanings; those on the left are more inclined than those on the right to see climate change as a serious problem and to think their government is doing too little to address it.

Ideological divides in the U.S. are larger than in any other public surveyed. Wide differences among Americans are also seen when comparing conservative Republicans with liberal Democrats. Political differences have been a hallmark of Americans’ views on climate. But other publics also have wide ideological divides over climate matters, consistent with past Center findings.

Views on climate change are widely shared among older and younger adults. There is a modest tendency for younger adults (at or under the median age) to say climate change is a very serious problem compared with older adults in a handful of places, including Australia, Canada, UK, the U.S. and others. 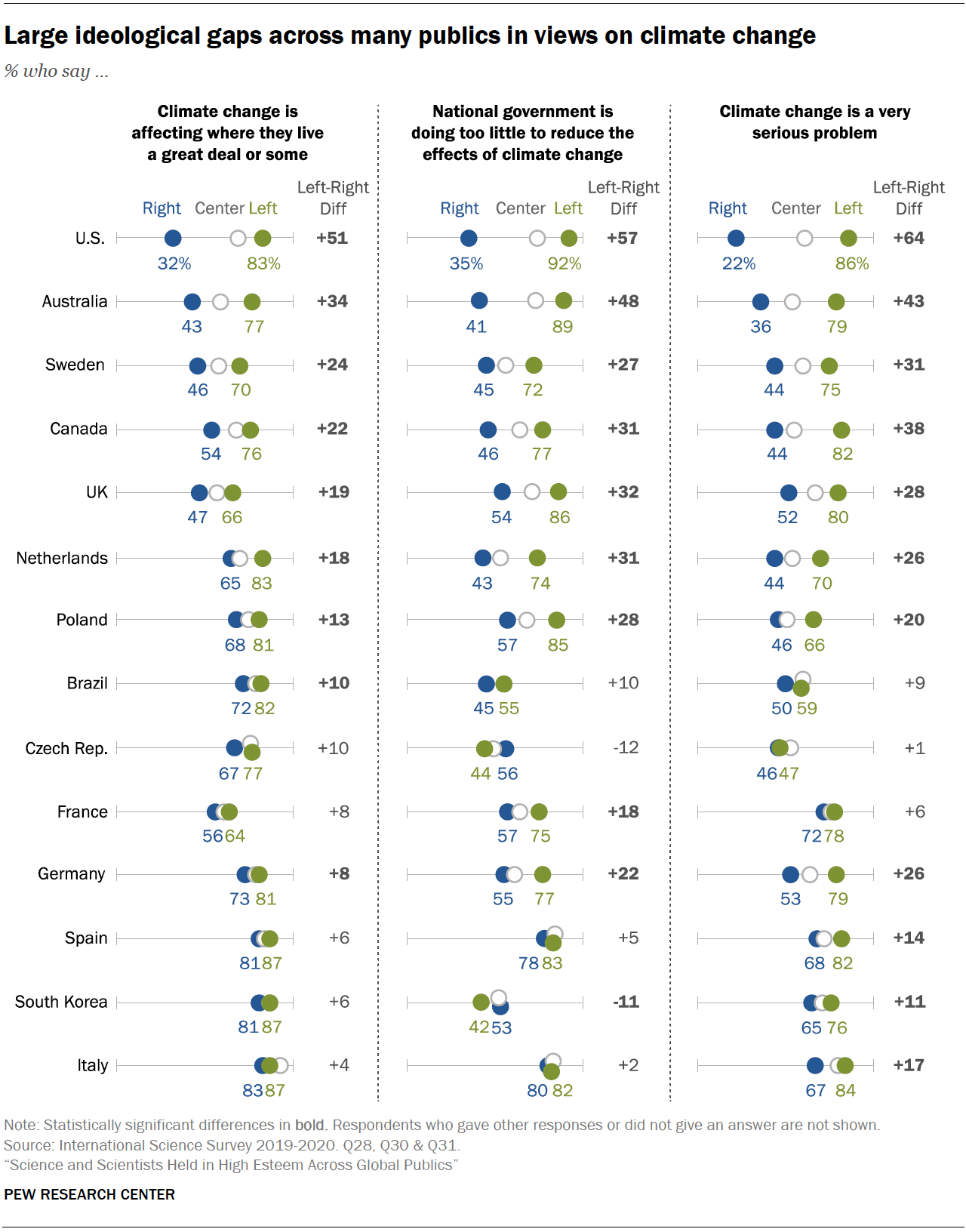 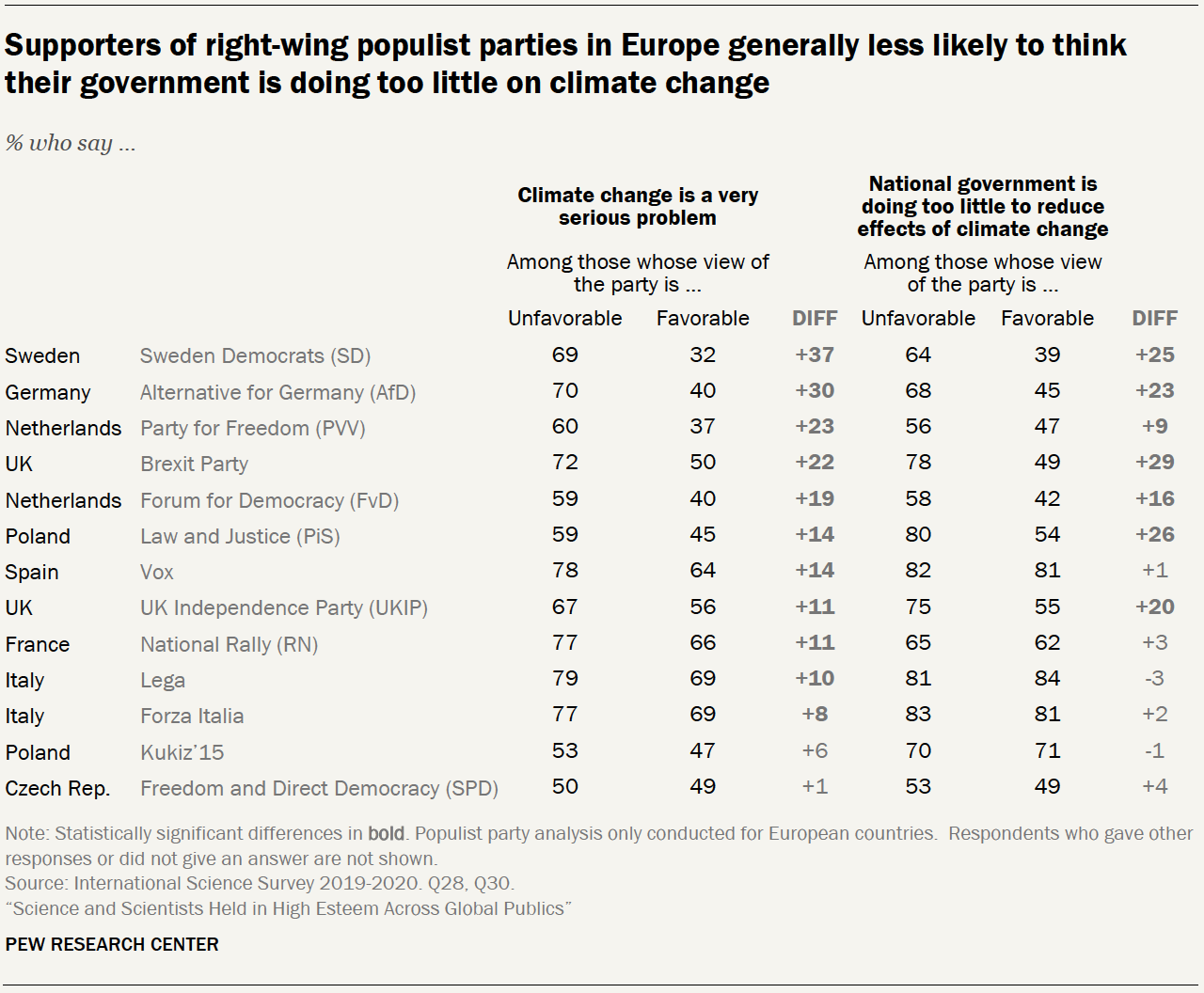 In most of these survey publics, large majorities classify a range of environmental issues as a big problem where they live. Majorities in 18 out of 20 survey publics see pollution of rivers, lakes and oceans as a big problem (20-public median of 78%). Nearly all in Spain (96%) and about nine-in-ten in Brazil, Italy, France and Russia say this. Swedes and Singaporeans are less concerned about water pollution, by comparison. In Sweden, for example, 54% say this is a big problem, 29% say it is a moderate problem and 16% say it is either a small problem or not problem.

Public concern about other environmental issues is also high, including air pollution (20-public median of 76% say this is a big problem), the loss of forests (74% median) and extinction of plant and animal species (67% median).

Swedes are less likely to consider each of these issues to be a big problem where they live. In Sweden, roughly a third see landfill waste, air pollution and loss of forests as a big problem – the lowest percentage among survey publics for these three items. 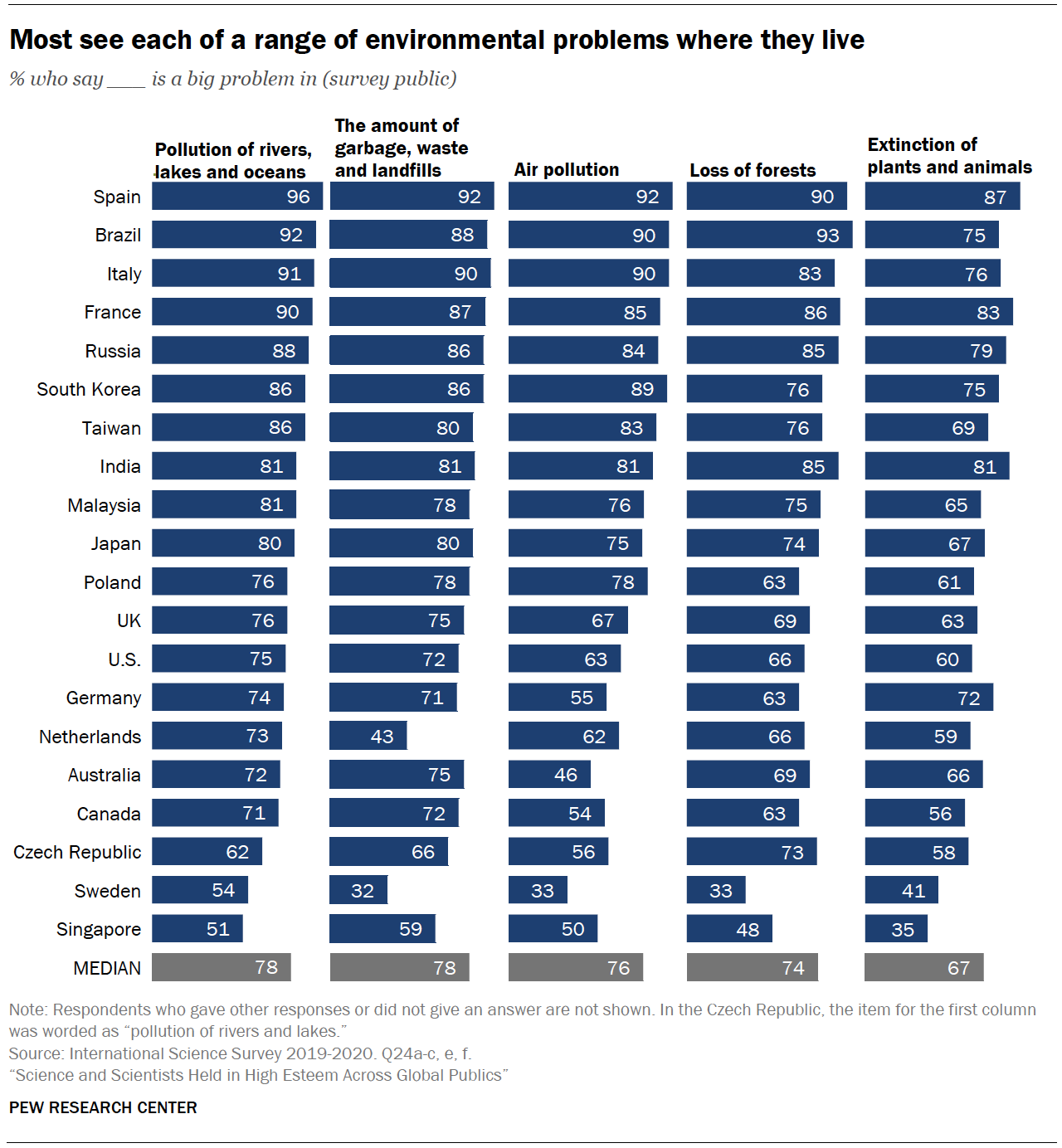 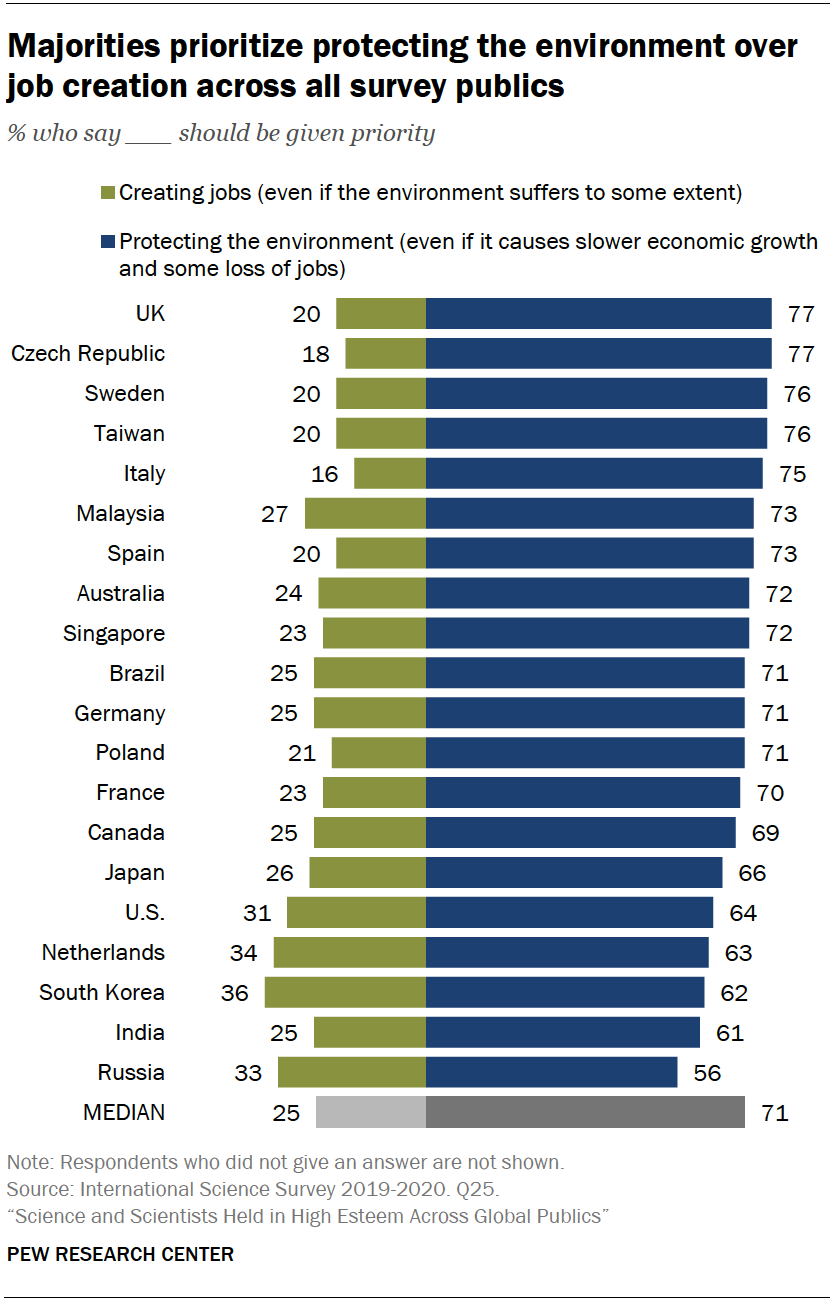 Public priorities on environmental protections have risen over time. In 18 of the 19 survey publics with a comparable survey trend, the share who would prioritize protecting the environment went up since 2005/2006.

The exception is Canada, where 69% would prioritize protecting the environment, about the same as said this in a 2006 World Values Survey. (All trend comparisons to surveys conducted by the World Values Survey or the Asian Barometer Survey. Note that these surveys used different ways of contacting survey respondents over time and such differences in survey mode can influence findings.) (See Appendix A for details.) 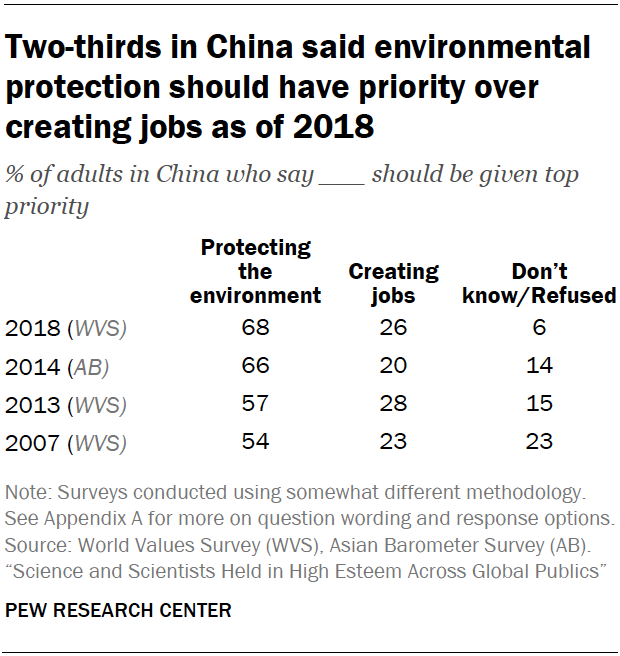 Public priorities related to the environment are strongly aligned with political ideology. People who think of their political views as on the left are much more likely than those on the right to prioritize environmental protection over job creation. Ideological differences are particularly wide in the U.S., Canada, Australia and the Netherlands (differences of at least 30 percentage points). This pattern is in line with wide differences by ideology on a range of climate, environment and energy issues. (Ideological self-placement is asked in 14 of the 20 publics; it is not asked in many of the Asian publics.)

There are also differences by age across 12 of the 20 survey publics, with younger adults more likely than older adults to say that protecting the environment should be given priority. The difference is largest in the Netherlands (16 points) and the U.S. (15 points). In Spain, Brazil and Australia, there is a 13-point gap. See details in Appendix A.

The United Nations’ sustainability goals on climate emphasize a need to “decarbonize” all aspects of the economy. The Center survey finds majorities across all 20 publics surveyed support the idea of prioritizing renewable energy production over that from oil, natural gas and coal sources.

As with beliefs about climate change, people on the left are more likely to prioritize renewable energy production than those on the right. See details in Appendix A.

As with views about climate and the environment, people’s views about energy issues also tend to vary with their ideology. Across many of the publics, where ideology ratings are available, those on the left express are less likely than those on the right to favor expanding fossil fuel energy sources. 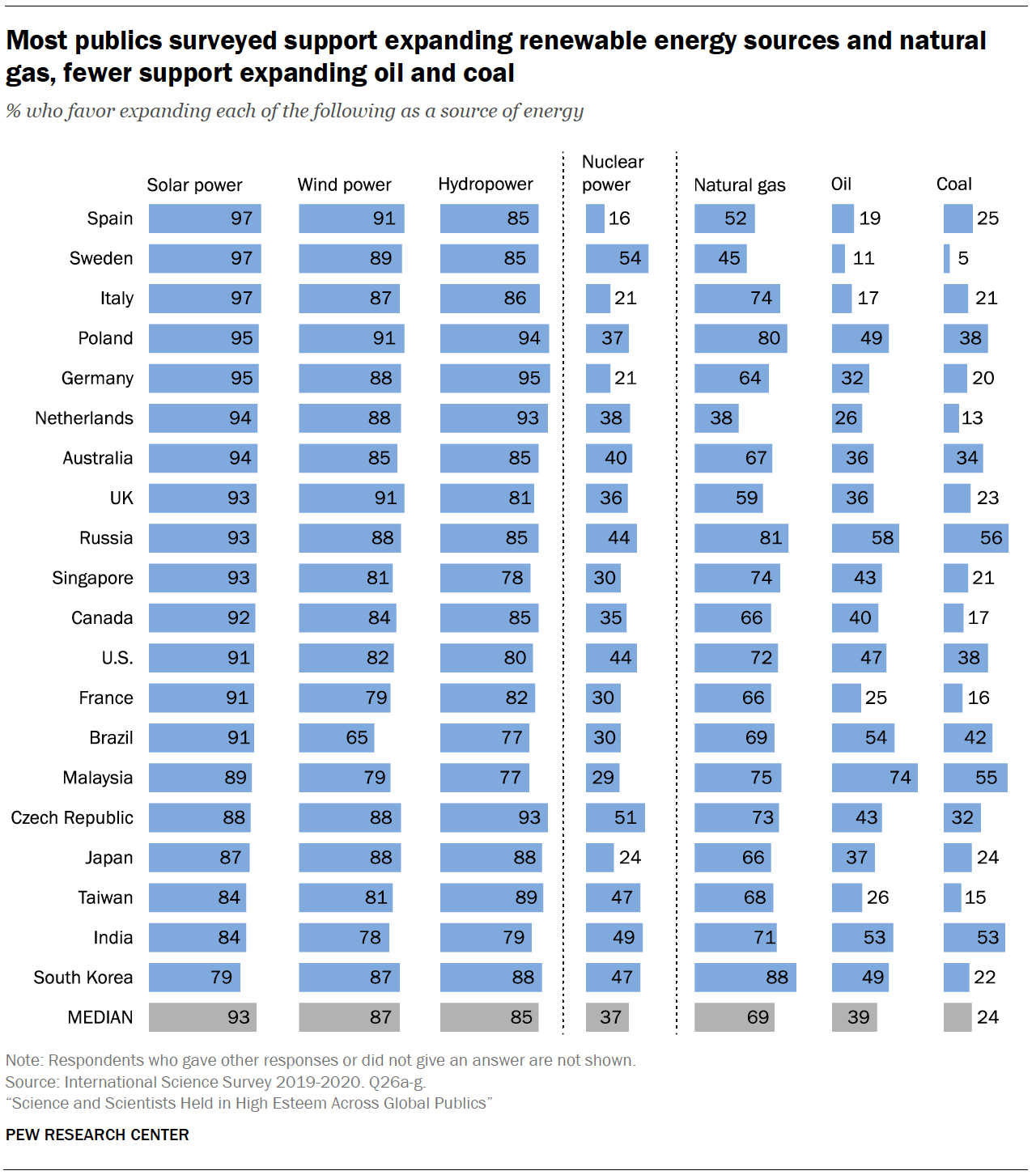 Next: 4. Publics express a mix of views on AI, childhood vaccines, food and space issues
← Prev Page
Page1Page2Page3You are reading page4Page5Page6Page7Page8Page9
Next Page →

Science and Scientists Held in High Esteem Across Global Publics 1. Scientists are among the most trusted groups in society, though many value practical experience over expertise 2. On the eve of the pandemic, most of these publics saw their medical treatments in a positive light
3. Concern over climate and the environment predominates among these publics
Large majorities see environmental problems where they live; a median of 71% would prioritize environmental protection over job creationMost adults across these publics would prioritize renewable energy sources over fossil fuel production
4. Publics express a mix of views on AI, childhood vaccines, food and space issues Acknowledgments Methodology Appendix A: Detailed charts and tables Appendix B: Classifying political parties as populist