This report is drawn from a survey conducted as part of the American Trends Panel (ATP), a nationally representative panel of randomly selected U.S. adults living in households recruited from landline and cellphone random-digit-dial (RDD) surveys. Panelists participate via monthly self-administered web surveys. Panelists who do not have internet access are provided a tablet and wireless internet connection. The panel, which was created by Pew Research Center, is being managed by GfK.

Data in this report are drawn from the panel wave conducted April 23-May 6, 2018, among 2,537 respondents. The margin of sampling error for the full sample of 2,537 respondents is plus or minus 2.8 percentage points.

Members of the ATP were recruited from several large, national landline and cellphone RDD surveys conducted in English and Spanish. At the end of each survey, respondents were invited to join the panel. The first group of panelists was recruited from the 2014 Political Polarization and Typology Survey, conducted Jan. 23-March 16, 2014. Of the 10,013 adults interviewed, 9,809 were invited to take part in the panel and a total of 5,338 agreed to participate.6 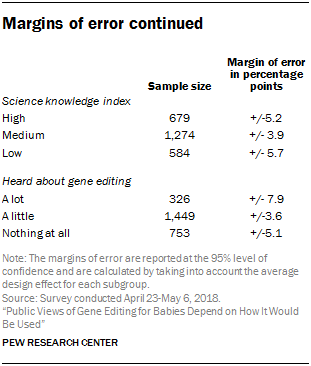 The second group of panelists was recruited from the 2015 Pew Research Center Survey on Government conducted Aug. 27-Oct. 4, 2015. Of the 6,004 adults interviewed, all were invited to join the panel, and 2,976 agreed to participate.7 The third group of panelists was recruited from a survey conducted April 25-June 4, 2017. Of the 5,012 adults interviewed in the survey or pretest, 3,905 were invited to take part in the panel and a total of 1,628 agreed to participate.8

The overall target population for Wave 34 was non-institutionalized persons ages 18 and older, living in the United States, including Alaska and Hawaii. The sample for Wave 34 consisted of 3,099 ATP members that were invited to Wave 33 and were still active. This subsample was selected using the following approach:

The ATP data were weighted in a multistep process that begins with a base weight incorporating the respondents’ original survey selection probability and the fact that in 2014 some panelists were subsampled for invitation to the panel. Next, an adjustment was made for the fact that the propensity to join the panel and remain an active panelist varied across different groups in the sample. The final step in the weighting uses an iterative technique that aligns the sample to population benchmarks on a number of dimensions. Gender, age, education, race, Hispanic origin and region parameters come from the U.S. Census Bureau’s 2016 American Community Survey. The county-level population density parameter (deciles) comes from the 2010 U.S. decennial census. The telephone service benchmark comes from the July-December 2016 National Health Interview Survey and is projected to 2017. The volunteerism benchmark comes from the 2015 Current Population Survey Volunteer Supplement. The party affiliation benchmark is the average of the three most recent Pew Research Center general public telephone surveys. The internet access benchmark comes from the 2017 ATP Panel Refresh Survey. Respondents who did not previously have internet access are treated as not having internet access for weighting purposes. Sampling errors and statistical tests of significance take into account the effect of weighting. Interviews are conducted in both English and Spanish, but the Hispanic sample in the ATP is predominantly U.S. born and English speaking.

Margins of error tables shown here provide the unweighted sample sizes and the error attributable to sampling that would be expected at the 95% level of confidence for different groups in the survey taking into account the average design effect for each subgroup. Sample sizes and sampling errors for other subgroups are available upon request. 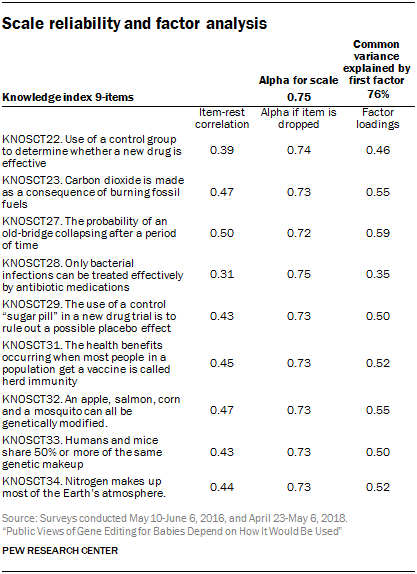 The Pew Research Center survey included a set of nine questions to tap public knowledge of science across a range of principles and topics. Most respondents (n=1,901) completed these questions as part of a previous wave of the American Trends Panel, conducted May 10-June 6, 2016. Respondents who did not participate in the previous wave answered these questions in this survey (n=636). The following shows the measurement properties of the index for the combined set of 2,537 respondents.10

As shown in the accompanying table, the internal reliability or consistency of the scale as measured by Cronbach’s alpha is 0.75. Each of the items in the scale is at least moderately correlated with the other items.

An exploratory factor analysis finds one common factor explaining 76% of the common variance in the items. The factor loadings show that each of the nine questions is moderately correlated with the common factor. These indicators suggest a set of items is measuring a single underlying dimension. 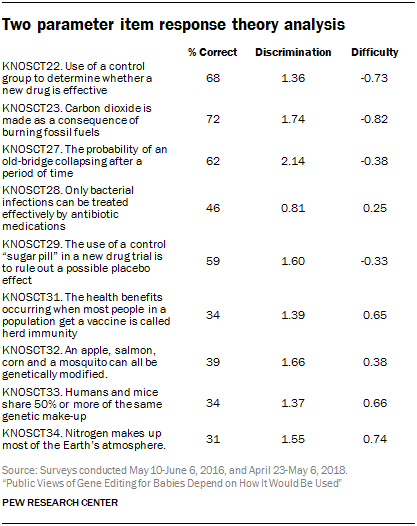 Note that each of the science knowledge questions are coded as binary variables (correct/incorrect). Both Cronbach’s alpha reliability analysis and the factor analysis are based on a Pearson’s correlation matrix. Pearson correlations with binary variables are restricted to a limited range, underestimating the association between two variables when compared with tetrachoric correlations. We do not anticipate that the use of a Pearson’s correlation matrix affects the unidimensional factor solution for the scale, however.

We also ran an item-response theory analysis (IRT) to check how well each question distinguishes between those who know relatively more or less on the scale. This analysis fits a two-parameter logistic model, allowing discrimination and difficulty to vary across the items. Discrimination shows the ability of the question to distinguish between those with higher and lower science knowledge. Difficulty shows how easy or hard each question is for the average respondent. We did not include a guessing parameter in the model; the questionnaire offered respondents an explicit option of not sure on the survey.

The Scientific and Ethical Elements of Human Enhancement
Many Americans are wary of using gene editing for human enhancement
Americans are closely divided over value of medical treatments, but most agree costs are a big problem
Americans broadly favor government funding for medical and science research
Biotechnology Research Viewed With Caution Globally, but Most Support Gene Editing for Babies To Treat Disease