Political fissures on climate issues extend far beyond beliefs about whether climate change is occurring and whether humans are playing a role, according to a new, in-depth survey by Pew Research Center. These divisions reach across every dimension of the climate debate, down to people’s basic trust in the motivations that drive climate scientists to conduct their research.

Specifically, the survey finds wide political divides in views of the potential for devastation to the Earth’s ecosystems and what might be done to address any climate impacts. There are also major divides in the way partisans interpret the current scientific discussion over climate, with the political left and right having vastly divergent perceptions of modern scientific consensus, differing levels of trust in the information they get from professional researchers, and different views as to whether it is the quest for knowledge or the quest for professional advancement that drives climate scientists in their work. 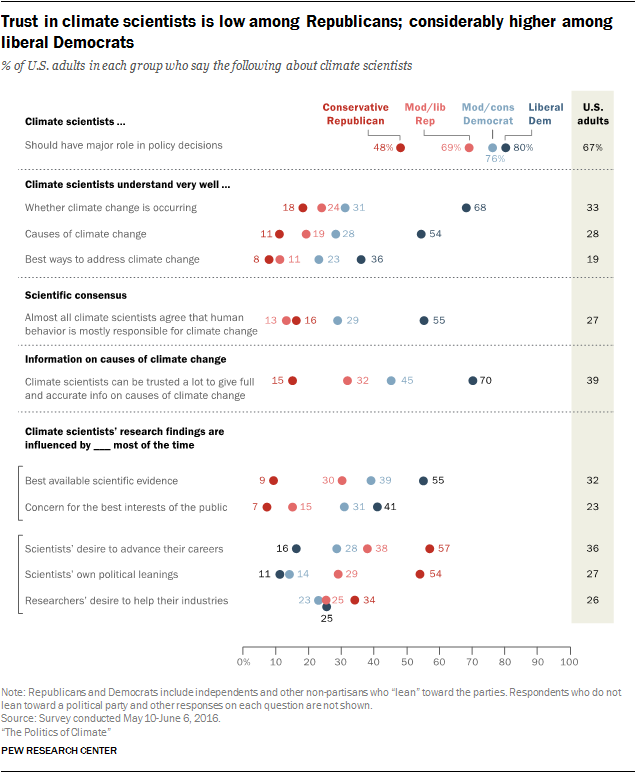 At the same time, political differences are not the exclusive drivers of people’s views about climate issues. People’s level of concern about the issue also matters. The 36% of Americans who are more personally concerned about the issue of global climate change, whether they are Republican or Democrat, are much more likely to see climate science as settled, to believe that humans are playing a role in causing the Earth to warm, and to put great faith in climate scientists.

When it comes to party divides, the biggest gaps on climate policy and climate science are between those at the ends of the political spectrum. Across the board, from possible causes to who should be the one to sort this all out, liberal Democrats and conservative Republicans see climate-related matters through vastly different lenses. Liberal Democrats place more faith in the work of climate scientists (55% say climate research reflects the best available evidence most of the time) and their understanding of the phenomenon (68% say climate scientists understand very well whether or not climate change is occurring). Perhaps it follows, then, that liberal Democrats are much more inclined to believe a wide variety of environmental catastrophes are potentially headed our way, and that both policy and individual actions can be effective in heading some of these off. Even the Republicans who believe the Earth is warming are much less likely than Democrats to expect severe harms to the Earth’s ecosystem and to believe that any of six individual and policy actions asked about can make a big difference in addressing climate change. And, a majority of conservative Republicans believe that each of the six actions to address climate change can make no more than a small difference.

Across all of these possible actions to reduce climate change, moderate/liberal Republicans and moderate/conservative Democrats fall in the middle between those on the ideological ends of either party.

The stakes in climate debates seem particularly high to liberal Democrats because they are especially likely to believe that climate change will bring harms to the environment. Among this group, about six-in-ten say climate change will very likely bring more droughts, storms that are more severe, harm to animals and to plant life, and damage to shorelines from rising sea levels. By contrast, no more than about two-in-ten conservative Republicans consider any of these potential harms to be “very likely”; about half say each is either “not too” or “not at all” likely to occur.

These are some of the principle findings from a new Pew Research Center survey. Most of the findings in this report are based on a nationally representative survey of 1,534 U.S. adults conducted May 10-June 6, 2016. The margin of sampling error for the full sample is plus or minus 4 percentage points. 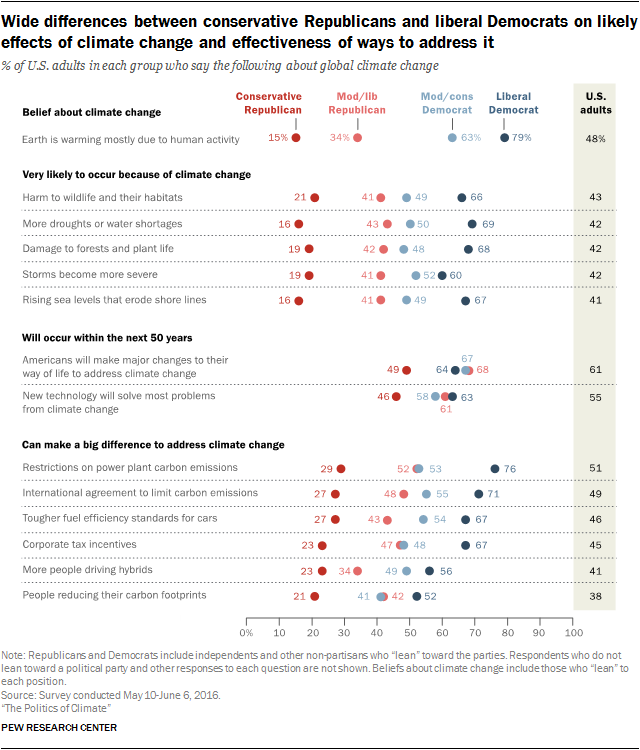 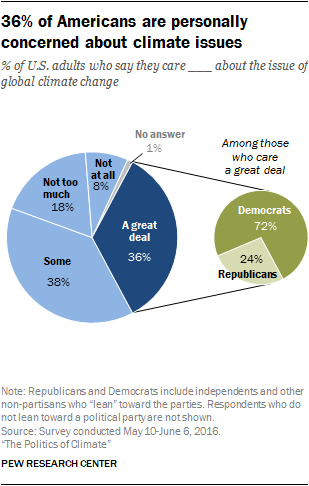 Some 36% of Americans are deeply concerned about climate issues, saying they personally care a great deal about the issue of global climate change. This group is composed primarily of Democrats (72%), but roughly a quarter (24%) is Republican. Some 55% are women, making this group slightly more female than the population as a whole. But, they come from a range of age and education groups and from all regions of the country.

There are wide differences in beliefs about climate issues and climate scientists between this more concerned public and other Americans, among both Democrats and Republicans alike. Indeed, people’s expressions of care are strongly correlated with their views, separate and apart from their partisan and ideological affiliations. 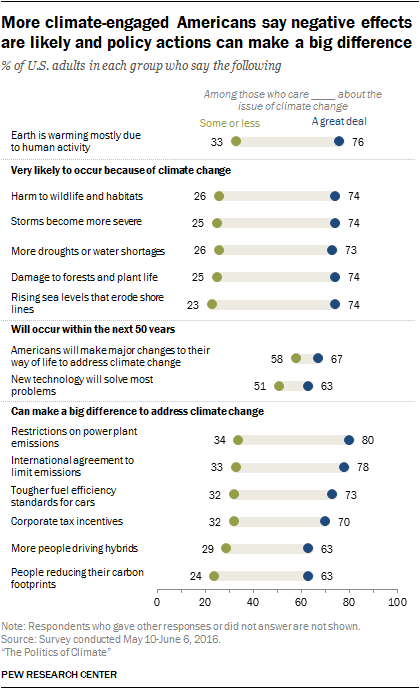 Most, but not all, among those with more personal concern about climate issues say the Earth’s warming is due to human activity. They are largely pessimistic about climate change, saying it will bring a range of harms to the Earth’s ecosystems. At the same time, this more concerned public is quite optimistic about efforts to address climate change. Majorities among this group say that each of six different personal and policy actions asked about can be effective in addressing climate change.

Further, those with deep concerns about climate issues are much more inclined to hold climate scientists and their work in positive regard. This group is more likely than others to see scientists as understanding climate issues. Two-thirds (67%) of this more climate-engaged public trusts climate scientists a lot to provide full and accurate information about the causes of climate change; this compares with 33% of those who care some and 9% of those with little concern about the issue of climate change. About half of those with deep personal concerns about this issue (51%) say climate researchers’ findings are influenced by the best available evidence “most of the time.” By the same token, those deeply concerned about climate issues are less inclined to think climate research is often influenced by considerations other than the evidence, such as scientists’ career interests or political leanings.

People’s views about climate scientists, as well as their beliefs about the likely effects of climate change and effective ways to address it, are explained especially by their political orientation and their personal concerns with the issue of climate change. There are no consistent differences or only modest differences in people’s views about these issues by other factors including gender, age, education and people’s general knowledge of science topics. 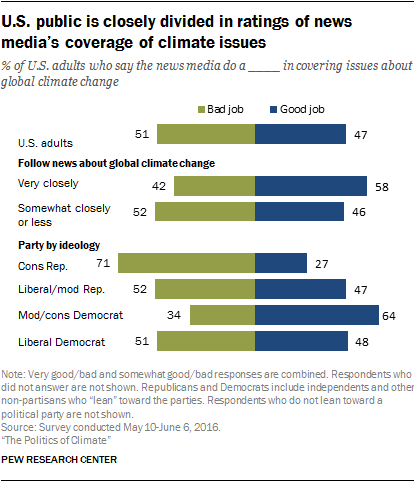 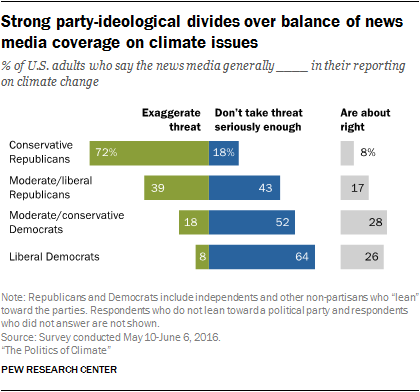 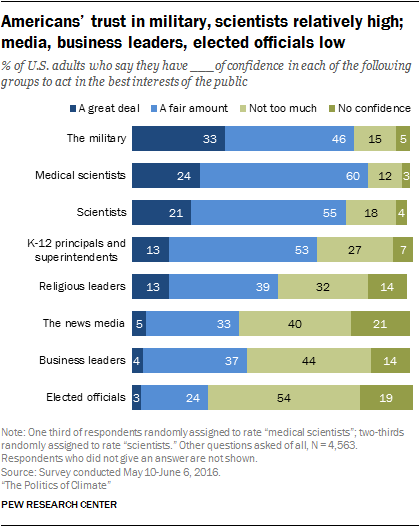 Though the survey finds that climate scientists are viewed with skepticism by relatively large shares of Americans, scientists overall – and in particular, medical scientists – are viewed as relatively trustworthy by the general public. Asked about a wide range of leaders and institutions, the military, medical scientists, and scientists in general received the most votes of confidence when it comes to acting in the best interests of the public.

Fully 79% of Americans express a great deal (33%) or a fair amount (46%) of confidence in the military to act in the best interests of the public. The relatively high regard for the military compared with other institutions is consistent with a 2013 Pew Research Center survey, which found 78% of the public saying the military contributes “a lot” to “society’s well-being.”

Confidence in the news media, business leaders and elected officials is considerably lower; public views about school and religious leaders fall in the middle. 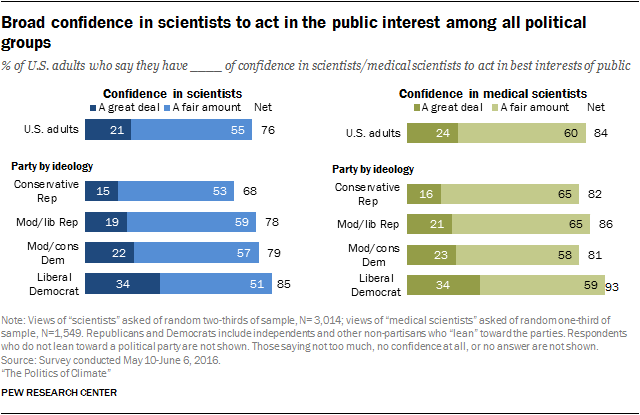 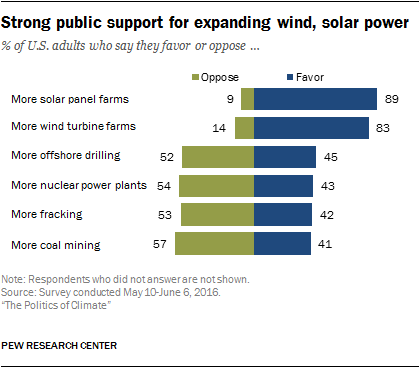 One spot of unity in an otherwise divided environmental policy landscape is that the vast majority of Americans support the concept of expanding both solar and wind power. The public is more closely divided when it comes to expanding fossil fuel energies such as coal mining, offshore oil and gas drilling, and hydraulic fracturing for oil and natural gas. While there are substantial party and ideological divides over increasing fossil fuel and nuclear energy sources, strong majorities of all political groups support more solar and wind production.

These patterns are broadly consistent with past Center findings that climate change and fossil fuel energy issues are strongly linked with party and ideology, but political divisions have a much more modest or no relationship with public attitudes on a host of other science-related topics.

Boom for home solar ahead?

Though more among this group of “everyday environmentalists” have a deep concern about climate issues, their beliefs about the causes of climate change closely match those of the public as a whole. Further, this group of environmentally conscious Americans is comprised of both Republicans (41%) and Democrats (53%) in close proportion to that found in the population as a whole.

How different are the actual behaviors of Americans who live out their concerns for the environment all the time from the rest of the public? When it comes to the list of potential activities covered in the Pew Research Center questionnaire, the answer is “not very.” Yes, those who describe themselves as always trying to protect the environment are a bit more likely do things such as bring their own reusable shopping bags to the grocery store in order to help the environment, but most do so only sometimes, at best. They are more likely to buy a cleaning product because its ingredients would be better for the environment, but again, most do so no more than sometimes. They are a bit more likely to have worked at a park cleanup day (23% vs. 11% of other adults) but no more likely to have cared for plantings in a public space. And they are no more likely than other Americans to reduce and reuse at home by composting, having a rain barrel or growing their own vegetables. Nor are environmentally conscious Americans more likely than other people to have spent hobby and leisure time hiking, camping, hunting or fishing in the past year. 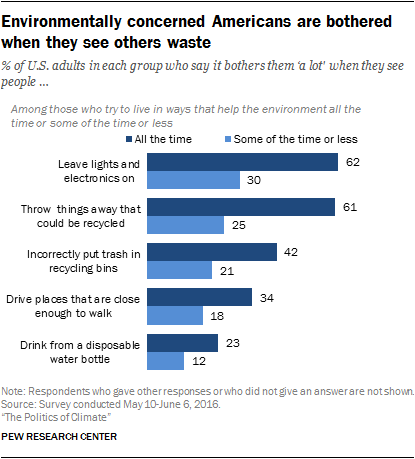 There is one way in which environmentally conscious Americans stand out attitudinally, however. They are much more likely to be bothered when other people waste energy by leaving lights on or not recycling properly.

A majority of Americans who are focused on living in ways that protect the environment say it bothers them “a lot” when they see other people leave lights and electronic devices on (62%), or throw away things that could be recycled (61%). And, sizeable minorities of environmentally conscious Americans are bothered a lot by people incorrectly putting trash in recycling bins (42%) or people driving places that are close enough to walk (34%). The least irksome behavior is drinking from a disposable water bottle; 23% of environmentally conscious Americans say this bothers them a lot, compared with 12% among those who are less focused on everyday environmentalism.

Next: 1. Public views on climate change and climate scientists
← Prev Page
You are reading page1Page2Page3Page4Page5Page6Page7Page8Page9
Next Page →

The Politics of Climate
Confidence in scientists and other groups to act in the public interestStrong bipartisan support for expanding solar, wind energy productionOne-in-five Americans aim for everyday environmentalism; their political and climate change beliefs mirror the U.S. population
1. Public views on climate change and climate scientists 2. Public opinion on renewables and other energy sources 3. Everyday environmentalism 4. Public knowledge about science has a limited tie to people’s beliefs about climate change and climate scientists About this report Acknowledgments Methodology Appendix A: Detailed tables