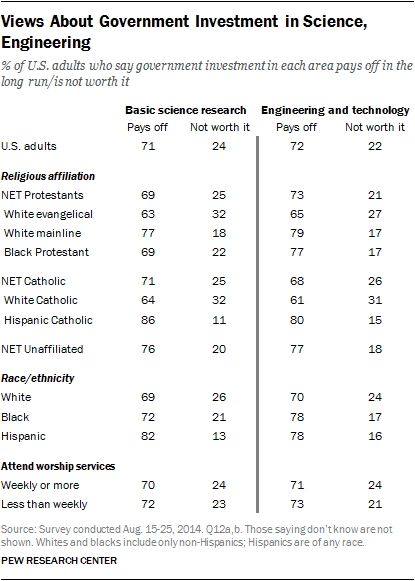 Majorities of all major religious groups say government investment in science pays off in the long run. Hispanic Catholics are particularly likely to hold this view (86%), followed by the unaffiliated (76%) and white mainline Protestants (77%). Some 64% of white Catholics and 63% of white evangelical Protestants say government spending on basic science research pays off.

There are no differences in perceived benefits of government funding in either area by frequency of church attendance.

There are no differences in views on this question by frequency of church attendance.

Views about this issue are also related to political party and ideology, as detailed in our report “Americans, Politics and Science Issues.” Separate logistic regression analyses, not shown, found neither religious tradition nor religious observance to significantly predict views about funding on this question after controlling for political and other factors.

Next: About This Report
← Prev Page
Page1Page2Page3Page4Page5Page6You are reading page7Page8Page9
Next Page →

Religion and Science Perception of Conflict Between Science and Religion Strong Role of Religion in Views About Evolution and Perceptions of Scientific Consensus Mixed Role of Religion in Views on Biomedical and Food Issues Religion and Views on Climate and Energy Issues Few Religious Group Differences in Views on Space Issues
Majorities of All Religious Groups See Long-Run Benefits of Science Funding
About This Report Appendix A: About the Survey