Scientists have broad involvement with non-expert citizens and some of the connections are forged through social media and blogs. Nearly all AAAS scientists (98%) have some level of interaction with the general public at least from time to time, and 51% have some contact with reporters about research findings. 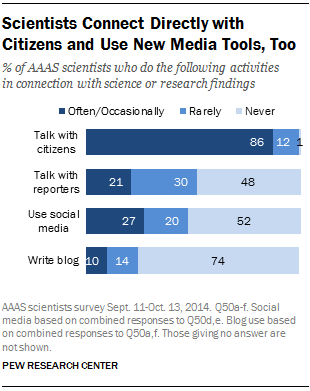 Looking in more detail at how often AAAS scientists engage in these behaviors produces the following portrait:

Despite widespread agreement about the worthiness of engagement in public policy debates, the frequency with which AAAS scientists engage with the public appears to be about the same as in 2009, when Pew Research last conducted a similar survey. The frequency with which scientists report talking with the general public and with the reporters is roughly the same in 2014 as it was in 2009. And the frequency of blogging is also about the same as in 2009, based on the measure where a trend is available. (AAAS scientists were not asked about social media usage in 2009.)

The audiences scientists hope to engage via digital media 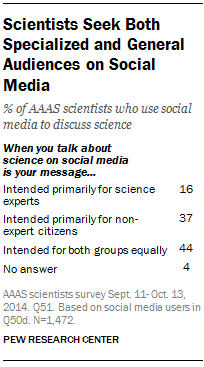 Which scientists are more and less engaged

The scientists who are most likely to be involved in public activities show distinct patterns by age, by the level of public debate and public interest they perceive in their specialty, and by discipline. There is also evidence in the survey that the most engaged often use multiple methods and platforms to connect with the public. In other words, those who engage tend to do so in multiple ways. 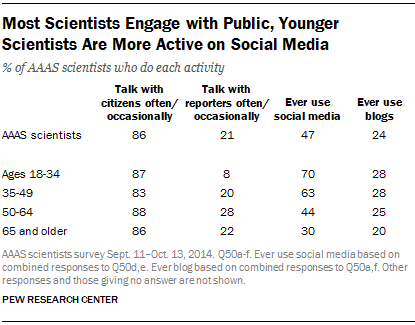 While most AAAS scientists at least occasionally interact with non-expert citizens, those who talk with reporters tend to be in the mid-career and older age groups, while social media is used especially by younger scientists.

Just 8% of AAAS scientists under age 35 talk with reporters about research findings often or occasionally. This could be the case because younger scientists might not have become quite as established in their fields as their older colleagues – and thus be perceived as sources for news stories. This compares with 28% among those ages 50 to 64. About a fifth of those ages 65 and older (22%) and ages 35 to 49 (20%) talk with reporters at least occasionally.

Interestingly, blogging spans the generations under age 65 about equally. Some 28% each of younger scientists (ages 18 to 34) and those ages 35 to 49 use blogging to engage about science in one way or another, as do 25% of those ages 50 to 64. A fifth of AAAS scientists ages 65 and older use blogs. 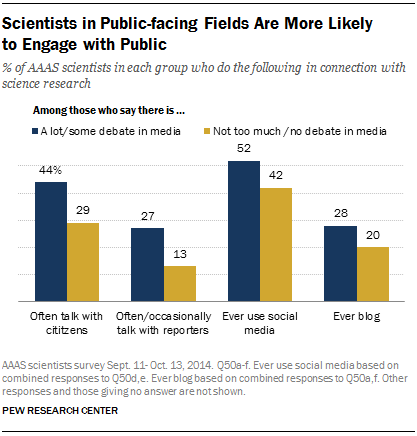 As a general rule, AAAS scientists who believe there is more debate in the media about their fields and who think there is relatively high public interest in their scientific discipline have more frequent interactions with the public and media.

Similarly, those who see more debate in the news about their specialty are more likely than other AAAS scientists to talk with reporters about new research findings at least occasionally (27% compared with 13%), to use social media (52% compared with 42%) and to write for a blog (28% compared with 20%). 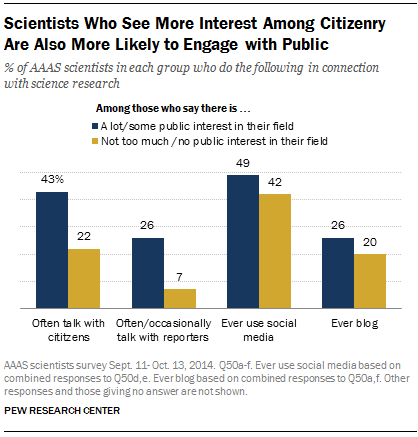 AAAS scientists who believe non-expert citizens have a lot or some interest in their specialty area are more likely than other scientists to talk with citizens; 43% do so “often” compared with 22% among those who see little interest among the public about their specialty. Similarly, AAAS scientists who perceive more public interest are more likely than others to talk with reporters about new research on an often or occasional basis, to use social media to talk about or follow science and to blog about science. 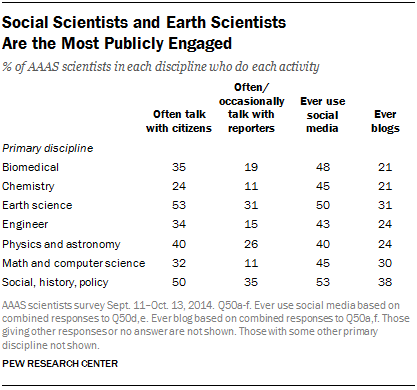 There are also disciplinary differences when it comes to the scientists who are most likely to engage the public in these various ways. Social scientists connected with AAAS and others working in the history of science or on science policy issues are particularly likely to engage the public. So, too, are earth scientists more likely than those in other areas to be involved in interactions with the public, the media, and through blogs: 53% of earth scientists often talk with citizens, 31% talk to reporters often or occasionally, and 31% blog about science in general or about their research and specialty area. The share using social media like Facebook or Twitter to talk about science or to follow tweets about research in their specialty ranges from four-in-ten among physicists and astronomers to 53% among AAAS members in the social sciences, policy or history fields.

Scientists who engage tend to do so in multiple ways 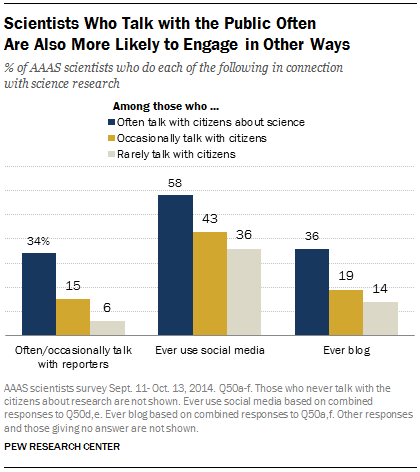 While talking with non-expert citizens is common among all AAAS scientists, those who often do so are also more likely than other AAAS scientists to talk with reporters at least occasionally, to use social media to talk about science, and to blog.

In an open-ended question, AAAS scientists were asked to share their thoughts on the best ways to encourage public support for scientific research. Fully 65% provided their ideas on this topic. The advice covered a number of themes, but many emphasized the importance of communicating with the public and becoming more involved with the local community, especially in schools.

Among those responding, some 21% of AAAS scientists advised others to use scientific advancements, especially in the medical field, to explain science’s impact in people’s everyday lives. Another 21% mentioned communication in general terms, while 6% expressed the importance of treating lay audiences as smart. Also, 5% said explaining research with less jargon would increase the society’s support for scientific research.

Some 8% of scientists urged their colleagues to present research findings transparently, while others said focusing on quality research would lead to more public support (2%).

“Be transparent. Speak honestly about your work and its limitations. Participate in public debate as an honest broker and not an advocate. Learn to communicate clearly about scientific issues for non-science audiences.”

Many discussed the importance of scientists becoming involved with children and education. One-in-five mentioned volunteering at local schools or promoting science education. Another 3% said mentoring children was an effective way to develop more support for scientific research.

“I seek opportunities to work with local junior high and high school science teachers to bring modern day science into the classroom, not just genetics and molecular biology but synthetic biology (participation in IGEM for example). This is work but really worth it. Not all teachers want this but sometimes they are interested. It is great fun.”

Getting scientific research covered in the news and educating journalists who write about science was mentioned by 14%; another 2% mentioned supporting science-themed TV shows, like NOVA or Cosmos.

“Talk to media, become part of the conversation. And also help the media get the story right. If we could also get some Neil Degrasse Tysons in other fields—like genetics/genomics, plant science, infectious disease—that would be handy too.”

Political engagement was mentioned by a number of those responding; 16% said becoming more involved in politics would be an effective strategy to gain support, while 3% thought less politics in science would increase public backing.

“Be as proactive as possible with elected officials at every level in an attempt to convince them that intellectual activity is central to the human condition and is essential to quality education.”

Other responses emphasized the importance of building support closer to home — 4% mentioned getting involved in community organizations, while 2% said talking to friends, family and neighbors was a good way to get people excited about science.

“Tell family, friends and neighbors about your research. Learn to talk about it in an interesting and exciting way that has meaning for the average person.” 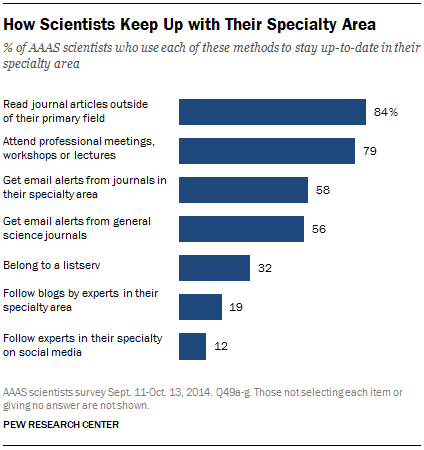 The Pew Research survey of AAAS scientists sought insight into how scientists keep abreast of developments in science. It is still the case that traditional information and peer networking activities are the most common ways scientists stay up-to-date. However, digital methods are now a common part of the learning toolkit for scientists.

In keeping with the trend toward interdisciplinary work, 84% of AAAS scientists read journal articles outside of their primary fields or scientific discipline. In addition, 79% say they attend professional meetings, workshops and lectures.

Still, digital communications are also a common part of the learning activities of scientists as they connect with peers: 58% get email alerts from journals in their specialty; 56% get emails from general science journals; 32% belong to email listservs; 19% follow blogs by experts their fields; and 12% follow tweets or other postings in social media by experts in their field.

Another 10% of these scientists cited additional ways they stay up-to-date. 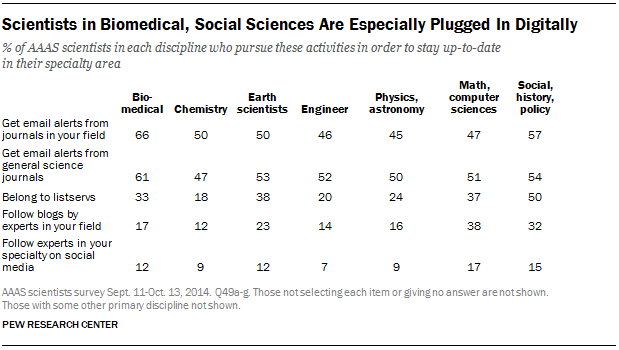 Next: Appendix: About the AAAS Scientists Survey
← Prev Page
Page1Page2You are reading page3Page4
Next Page →