As is the case in most countries, population density varies widely across India. The most populous state, Uttar Pradesh, recorded close to 200 million (20 crore) inhabitants in the 2011 census, while the southern archipelago of Lakshadweep had fewer than 100,000 (1,00,000 in India’s number system). Adherents of religious groups also are not evenly distributed across the country.

A note on large numbers

As a result, religious groups live in a wide variety of local contexts in ways that are not apparent in the national patterns presented above. In some cases, many million (tens of lakh) members of a certain group live as a religious minority in a very large state. And in others, a much smaller number of adherents form a large majority in one of India’s smaller states.

Muslims are the majority in the small tropical archipelago of Lakshadweep (total population 60,000) and in Jammu and Kashmir (13 million, or 130 lakh), on the border with Pakistan. Jammu and Kashmir was carved out as a state separate from both India and Pakistan during Partition, but in 2019 was stripped of its semi-autonomous status and reorganized into territories to be administered by India directly. Jammu and Kashmir was home to about 8.6 million (86 lakh) Muslims as of the 2011 census, making it the Indian state with the seventh-largest Muslim population. 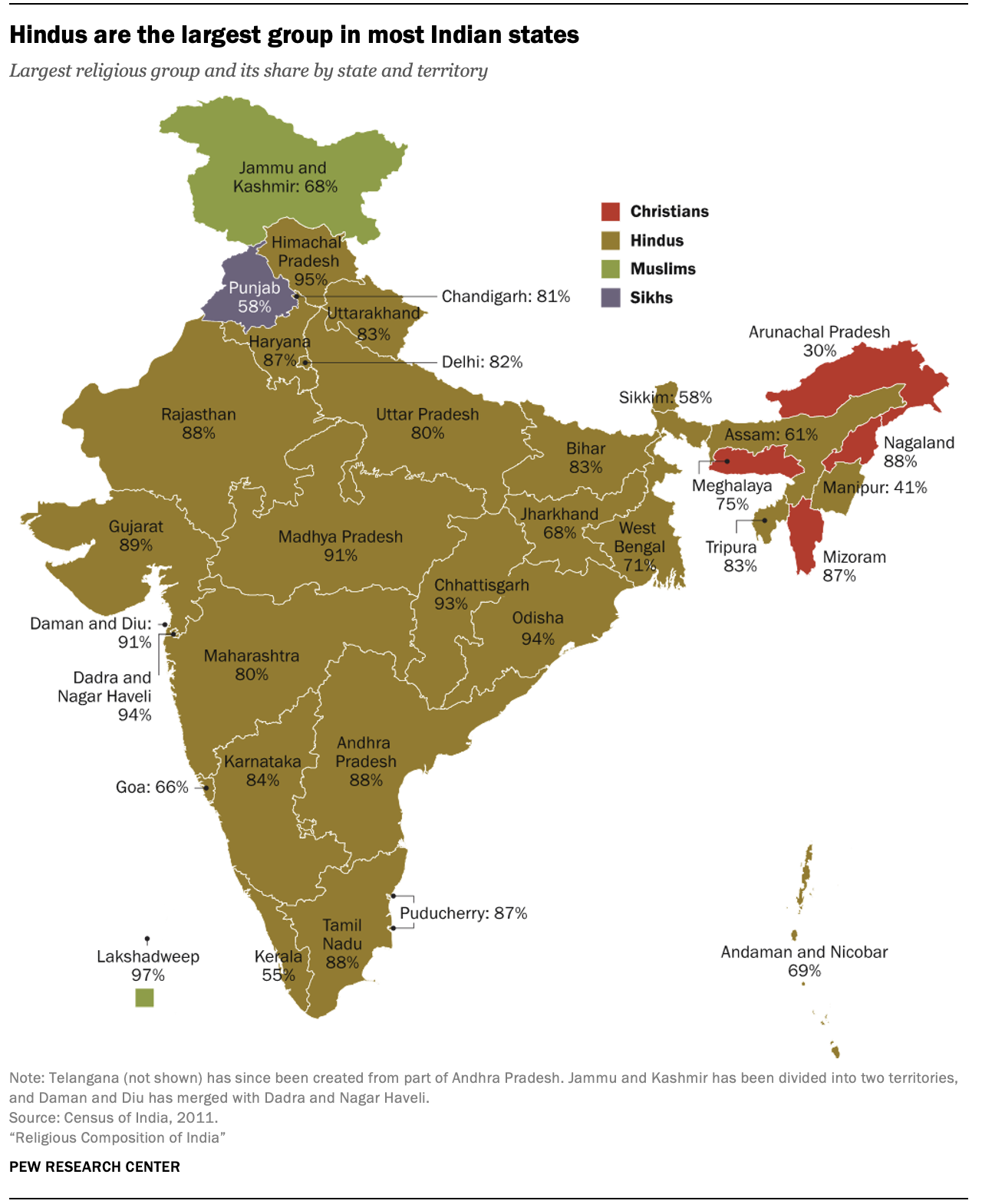 Christians are a majority in Nagaland (total population 2 million, or 20 lakh), Mizoram (1 million, or 10 lakh) and Meghalaya (3 million, or 30 lakh) – three small states in a sparsely populated, fertile mountain range in India’s Northeast. Smaller numbers of Christians live in any of those states than live as religious minorities in the much larger states of Kerala (33 million, or 3.3 crore) and Tamil Nadu (72 million, or 7.2 crore).

Sikhs are the largest group in Punjab (total population 28 million, or 2.8 crore), which is the only state where a religious group other than Hindus, Muslims or Christians forms a majority. The populations of two states, Arunachal Pradesh (1.4 million, or 14 lakh) and Manipur (3 million, or 30 lakh), are religiously diverse, with substantial shares of several religious groups and none approaching a majority. In Arunachal Pradesh, for example, where 39% of the population falls into the “other” category of smaller religions, many people identify as Donyi-Polo. Meanwhile, in the state of Sikkim, which borders Tibet, 27% are Buddhists.

Though the population shares discussed in this chapter are as of the last Indian census conducted in 2011, state majorities are generally large enough that they would not be expected to move below 50% in a single decade.

When it comes to total numbers, the largest populations of both Hindus (159 million, or 15.9 crore) and Muslims (38 million, or 3.8 crore) live in Uttar Pradesh, accounting for 16% and 22% of India’s Hindus and Muslims, respectively. The greatest number of Christians live in Kerala (6 million, or 60 lakh, which is about 22% of the country’s Christians). Most Sikhs live in Punjab (16 million, or 1.6 crore – 77% of Indian Sikhs).

Buddhists are most often found in Maharashtra on India’s western coast (6.5 million, or 65 lakh), making up 77% of India’s Buddhists. Maharashtra, India’s second most populous state – which includes Mumbai, India’s largest city – is also the state with the largest number of Jains (1.4 million, or 14 lakh – 31% of Indian Jains). 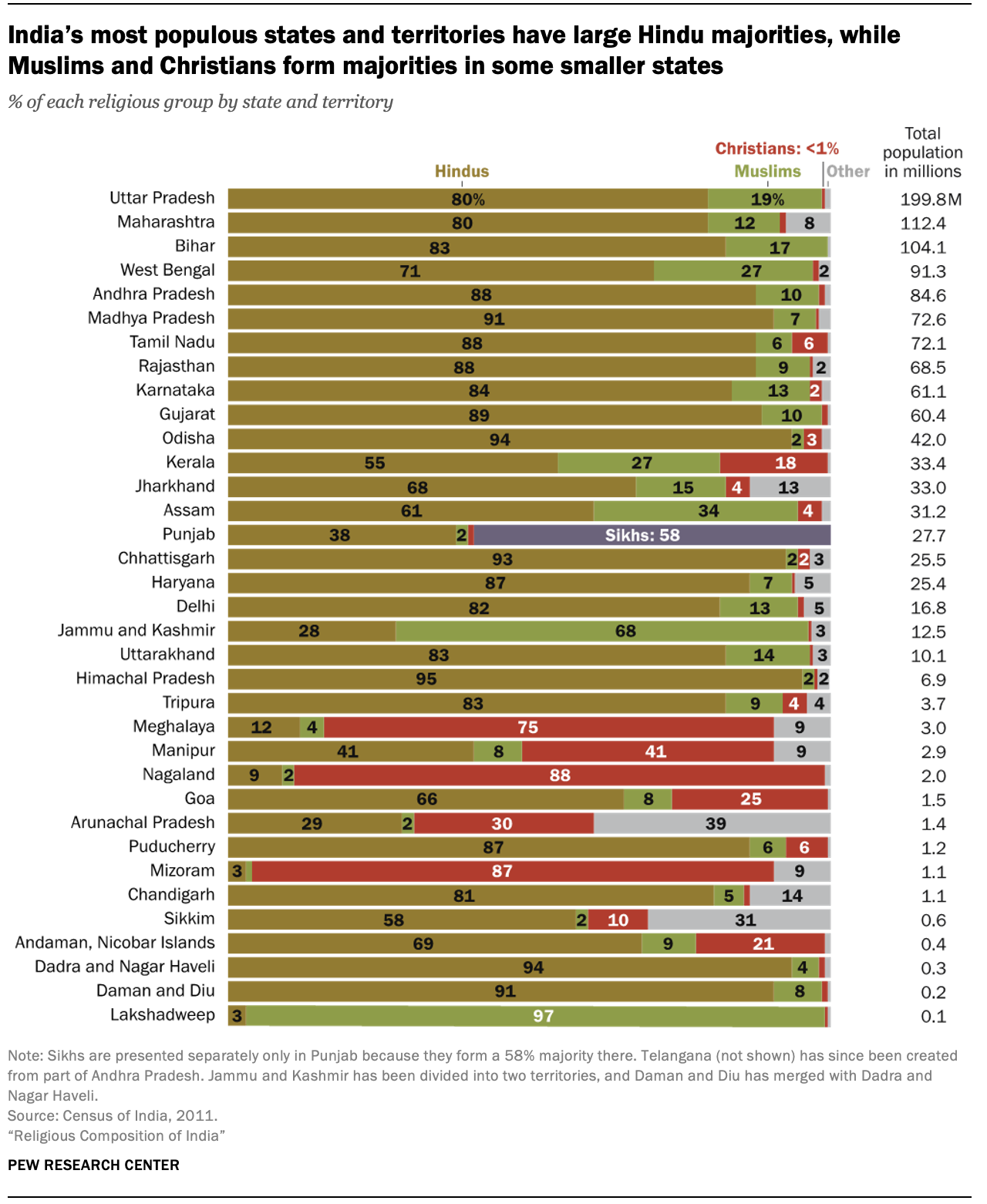 At the state level, religious distributions were relatively stable in the most recent census decade

While most of this report examines changes in religious composition on a national level since the first post-independence census of 1951, this section focuses on developments within states between the censuses of 2001 and 2011.

India’s domestic borders were largely stable across its 35 states and union territories during that decade, making it possible to track state-level changes in the relative sizes of religious groups. Prior to 2001, the boundaries of states and territories shifted frequently, making it difficult to draw comparisons from one census to the next. (See previous sidebar for more on India’s shifting geography.)

Overall, there was relatively little change in the religious composition of states between 2001 and 2011, particularly within the more populous ones, even as populations soared in almost every state. Within states, religious groups’ shares rarely rose or fell by more than 3 percentage points, and in most cases, they did not change by more than a small fraction of 1%. 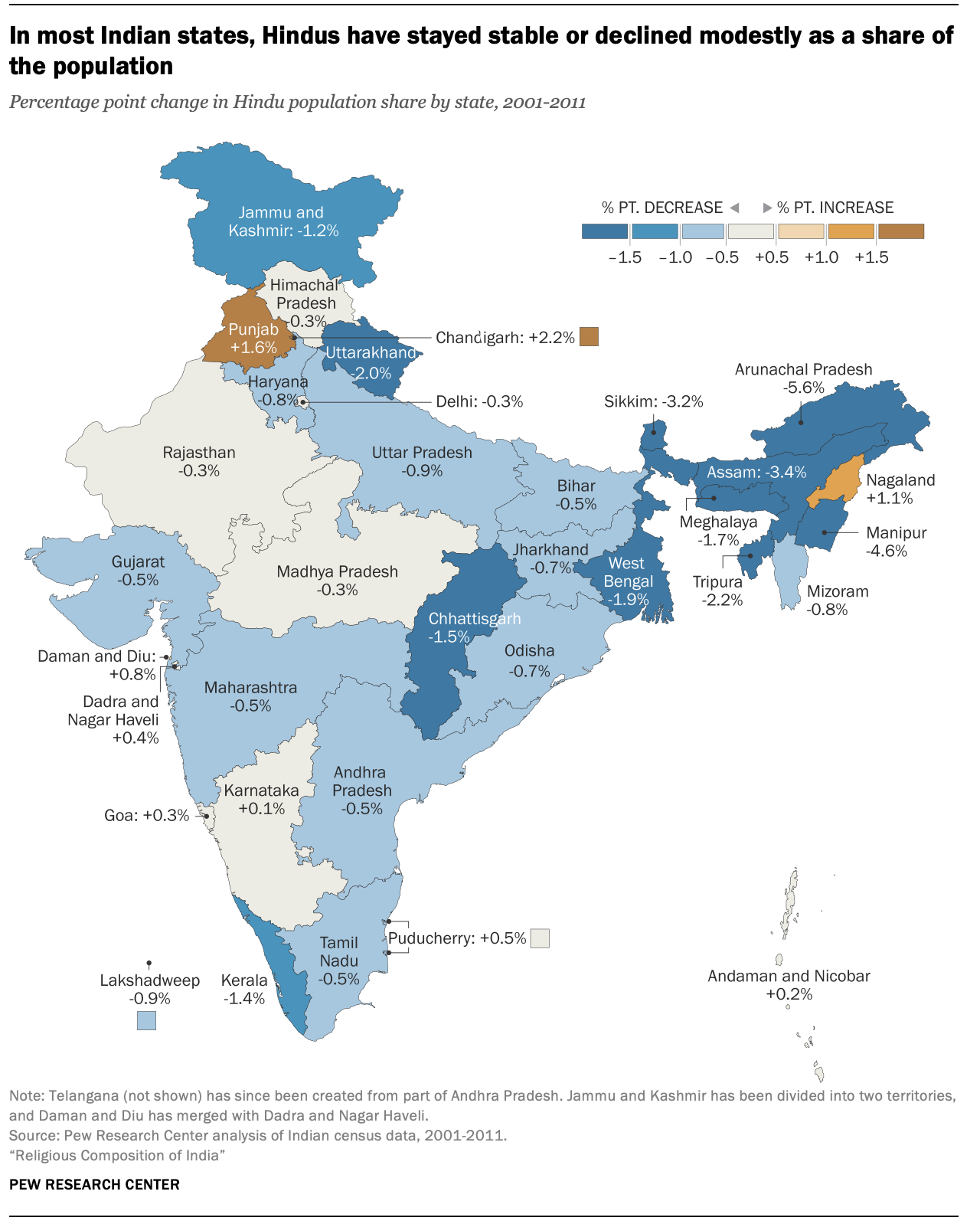 Muslims usually maintained their population shares within states or increased them slightly between 2001 and 2011. For instance, Muslims grew as a share of West Bengal’s population by 1.8 percentage points, and the Muslim majority in Jammu and Kashmir grew by 1.3 points. The only state in which the Muslim share dropped was Manipur, with a 0.4-point decrease. 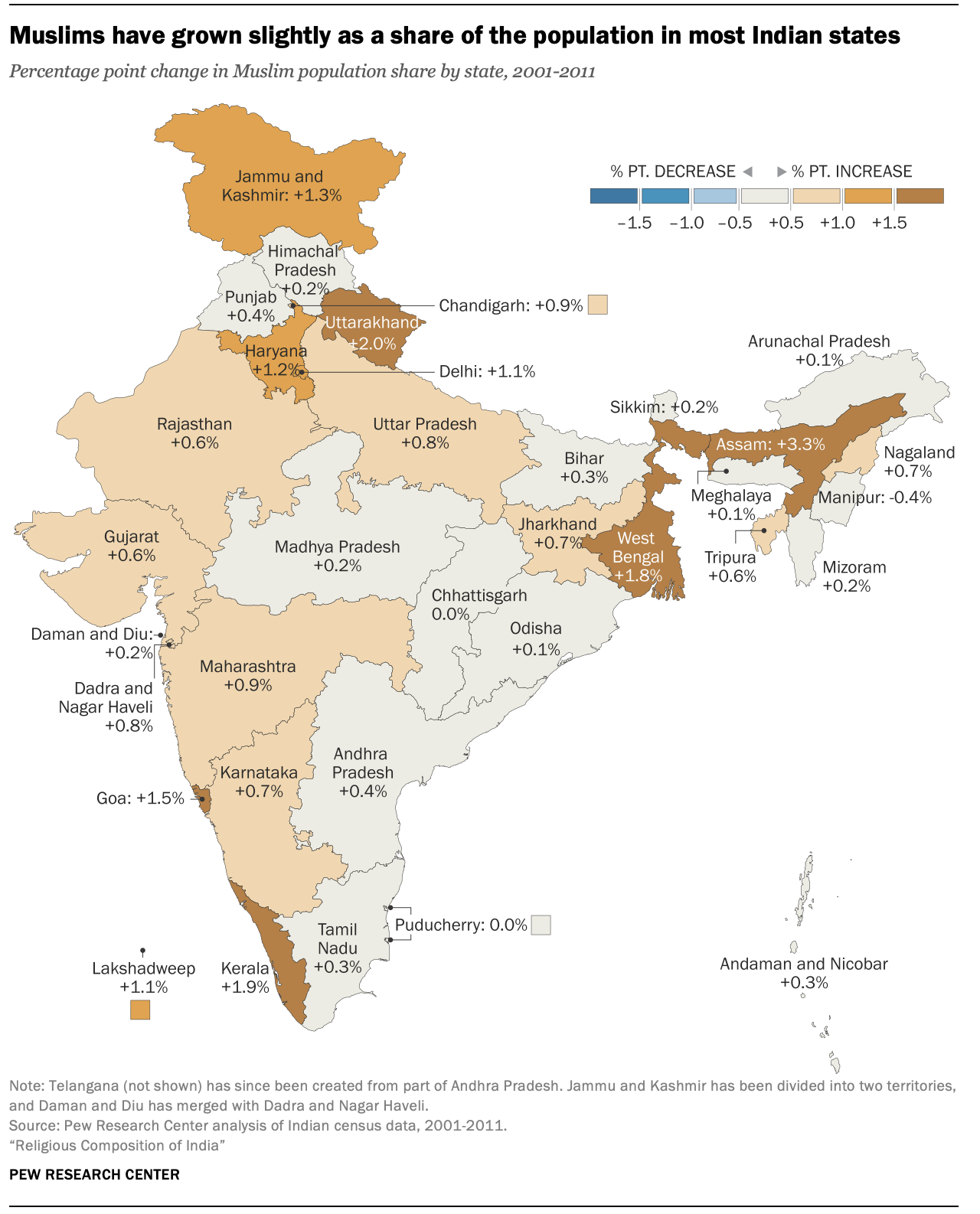 Christians experienced significant changes to their population shares only in India’s Northeast. With the exception of Assam (population 31 million, or 3.1 crore), the Northeastern states have very small populations – ranging from 610,000 (Indian system: 6,10,000) in Sikkim to 3.7 million (37 lakh) in Tripura – so even minor fluctuations in religious groups’ counts can substantially affect their relative sizes. Indeed, changes in overall religious composition were most pronounced in this mountainous region, which is wedged in a panhandle bordering China, Bangladesh, Myanmar, Bhutan and Nepal and is largely isolated from the rest of India. 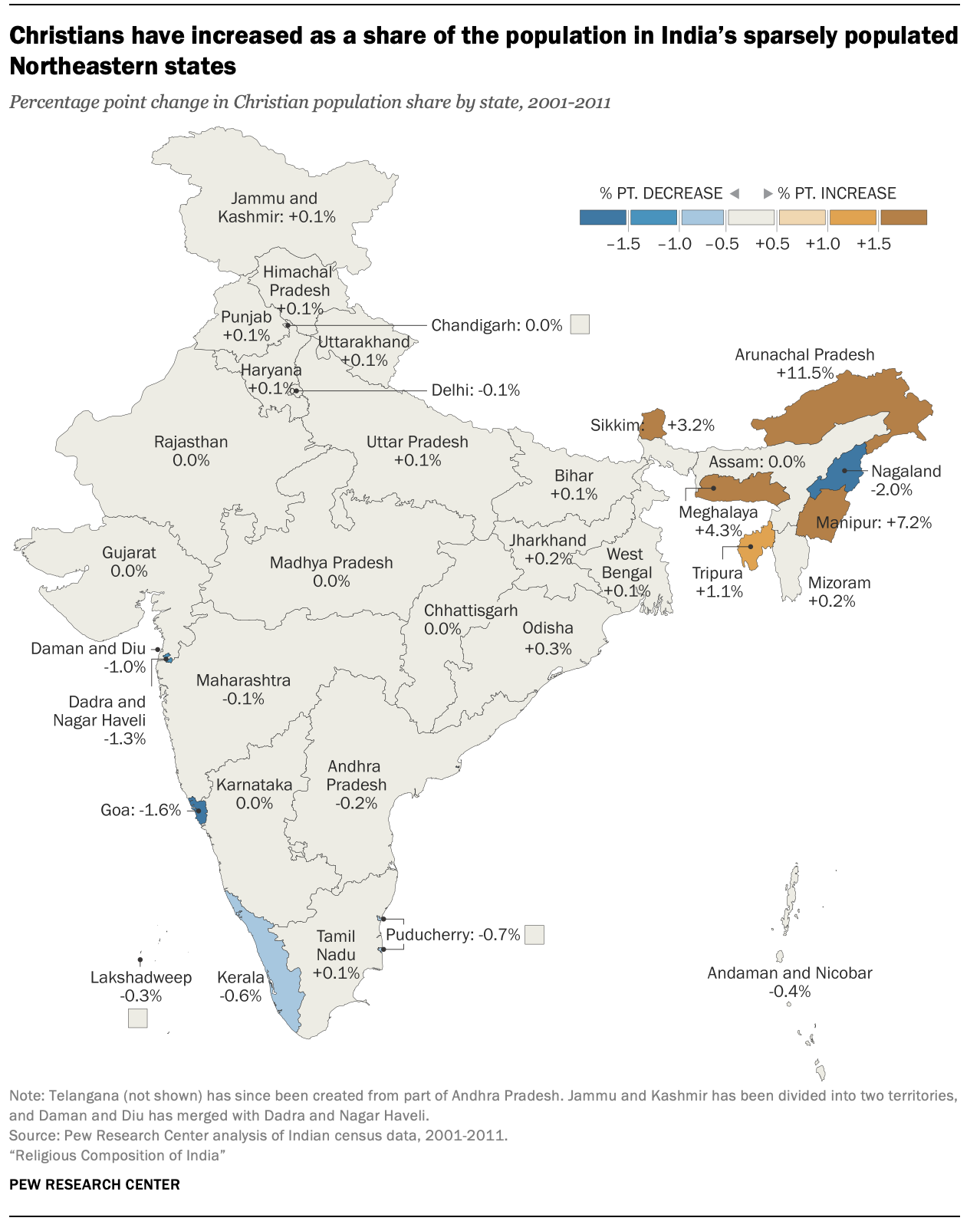 Besides Assam, only four other states with a population of at least 10 million (1 crore) had any religious groups that experienced changes of 2 percentage points or more in their share of the state population between 2001 and 2011.

In terms of absolute numbers, Hindus, Muslims and Christians grew in virtually every Indian state. The number of Hindus decreased slightly (by about 1,500) in only one state, Christian-majority Mizoram, while the number of Christians declined by more than 50,000 in both Nagaland and Andhra Pradesh. The total number of Muslims did not discernably decrease in any state during this decade.