India’s population has more than tripled in the six decades following Partition, from 361 million (36.1 crore) people in the 1951 census to more than 1.2 billion (120 crore) in 2011. As of 2020, India gains roughly 1 million (10 lakh) inhabitants each month, putting it on course to surpass China as the world’s most populous country by 2030, according to the United Nations Population Division.

A note on large numbers 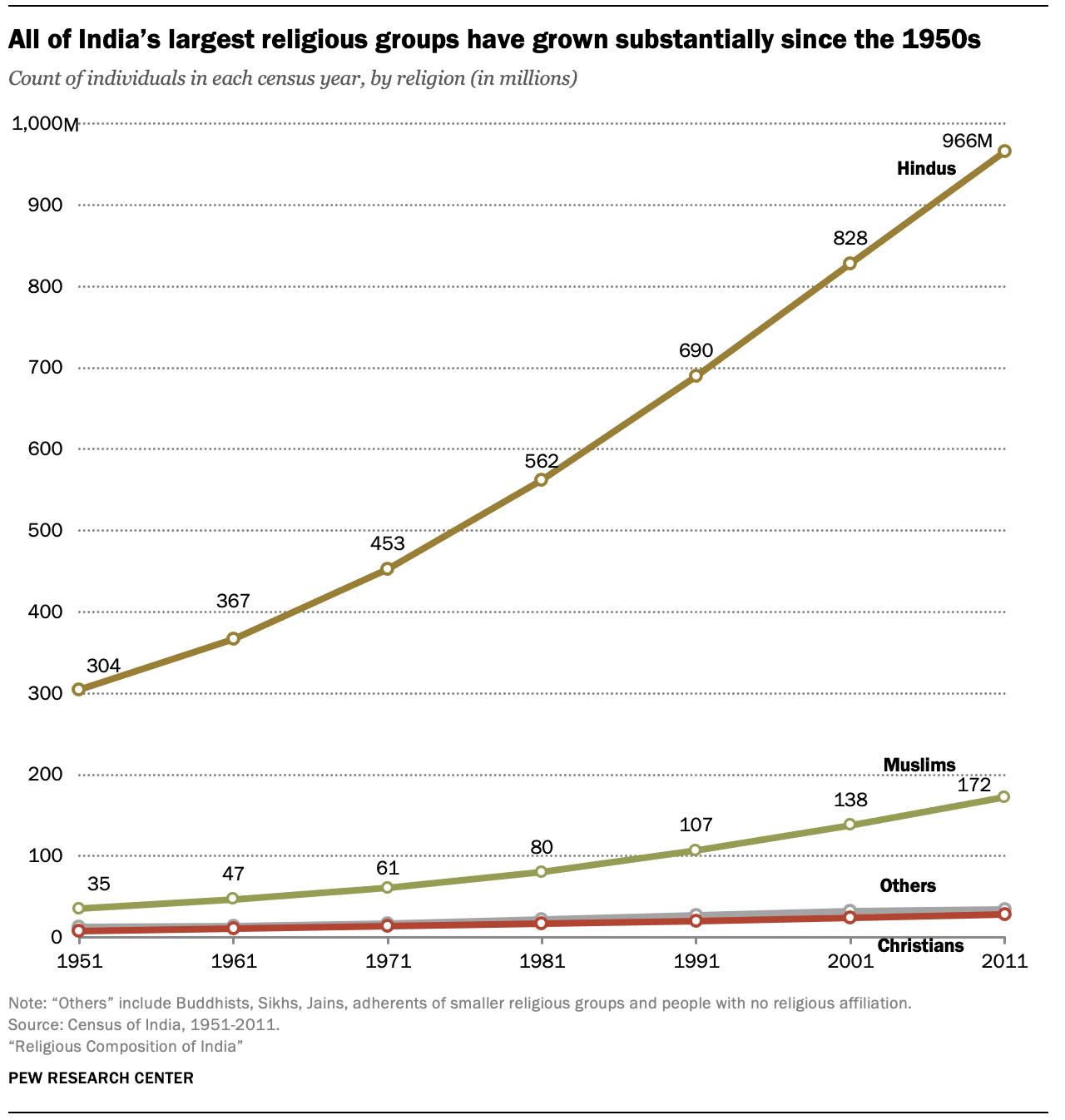 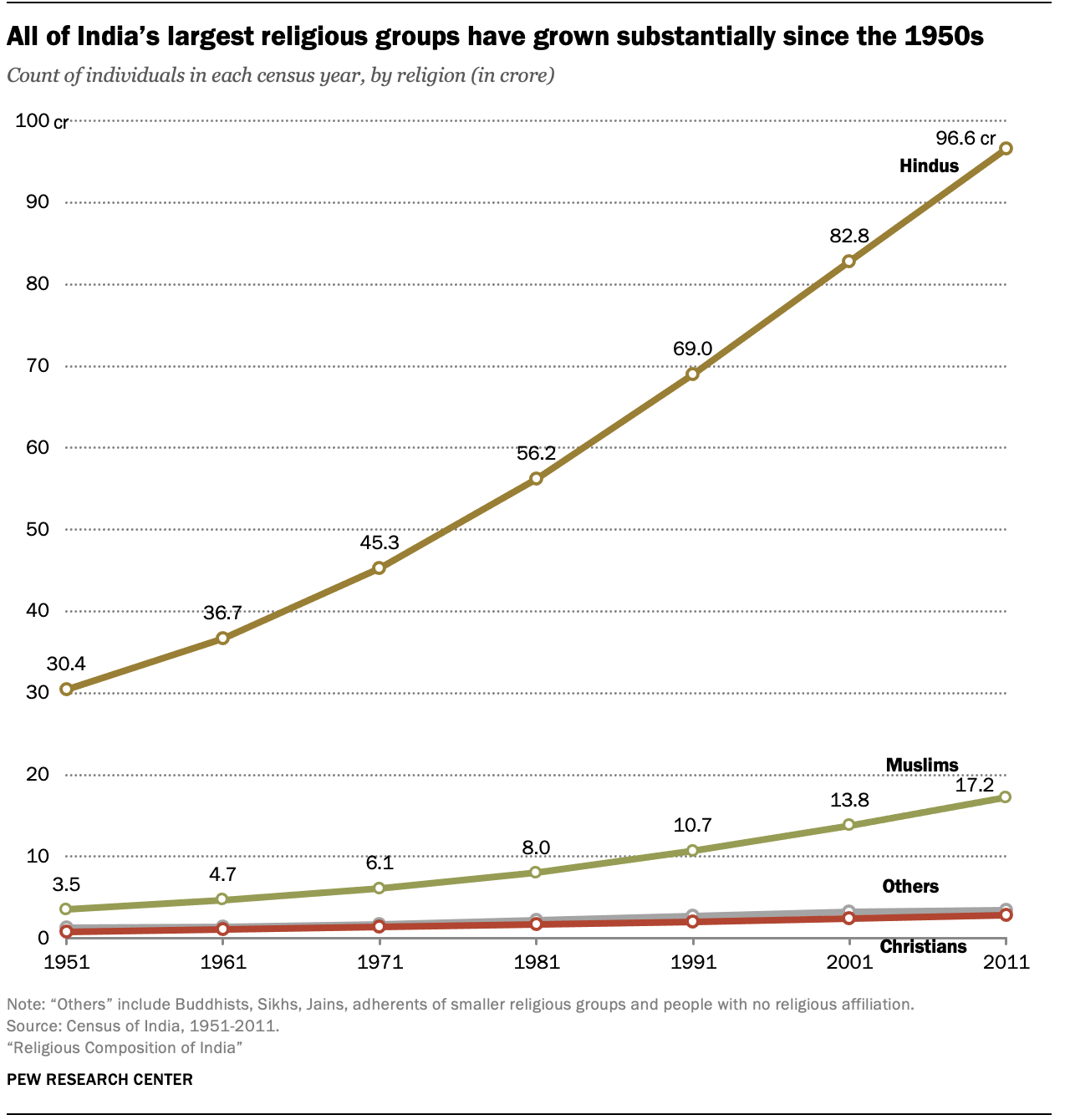 In India, castes are hereditary social classes. Historically, the caste someone was born into permanently determined their status in the social hierarchy, along with their available social circle and what careers they could pursue. 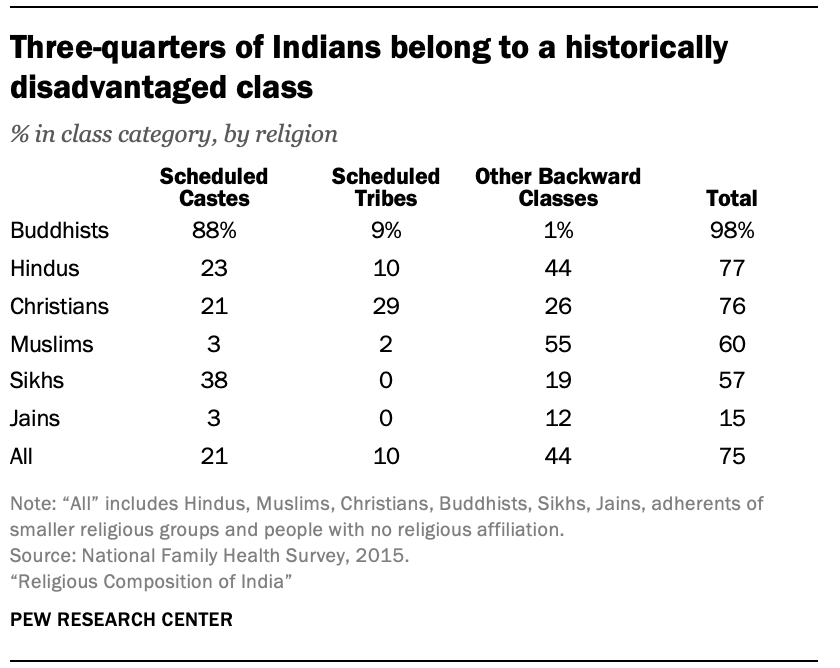 In an effort to reduce disadvantages caused by caste, the government has affirmative action programs known as “reservations.” India’s constitution reserves 15% of government jobs and seats in institutions of higher education for people identified as belonging to Scheduled Castes, 7.5% for those who belong to Scheduled Tribes and 27% for those of “Other Backward Classes” (OBCs).

Scheduled Castes, also known as Dalits (or by the pejorative term “untouchables”), are made up of groups who were traditionally ostracized and relegated to “polluting” occupations like fishing, scavenging and sewer cleaning. Scheduled Tribes are Indigenous peoples. People belonging to OBCs inherited other social class identities that have been socially and educationally disadvantaged.

Under the constitution, Muslims and Christians are not eligible for most of the caste-based reservations available to Hindus and others. This issue is controversial. Proponents of changing the law to allow greater access to benefits point out that excluding these groups from programs intended to lift disadvantaged people out of poverty contributes to inequalities along religious lines, essentially preserving the caste system for some people. But supporters of the current system highlight these groups’ eligibility to receive reservations based on OBC status, as well as benefits under anti-poverty programs for religious minorities.

According to the National Family Health Survey, most Indian households (75%) belong to a caste category that is eligible for government reservations, but this varies widely by religious affiliation, ranging from 15% of Jains to 98% of Buddhists. About three-quarters (76%) of Christians belong to a historically disadvantaged caste, including 21% who say they are members of a Scheduled Caste. However, on the Indian census, Christians are not able to identify as members of a Scheduled Caste, which may lead to an undercount of Christians in the census.

In the same survey, smaller shares of Muslims identified as belonging to a Scheduled Caste or Tribe, but over half said they were members of OBCs.

India’s population boom in the 20th century coincided with an economic transformation that brought major improvements in life expectancy, living standards and food production. But there is a consensus among experts that India’s economic development has been hindered in part by the strains that population growth has put on schools, health care and natural resources. Since the 1950s, Indian governments have worked with international agencies to promote a range of birth control methods, from contraceptives to forced sterilizations. Today, some states and territories discourage large families with penalties, such as barring parents with more than two children from receiving social services or holding political office. In 2017, India’s Ministry of Health and Welfare launched a comprehensive family planning program with the goal of bringing fertility down to replacement levels by 2025 by improving health care facilities, access to contraceptives and reproductive health education, particularly in areas with relatively high fertility rates.5 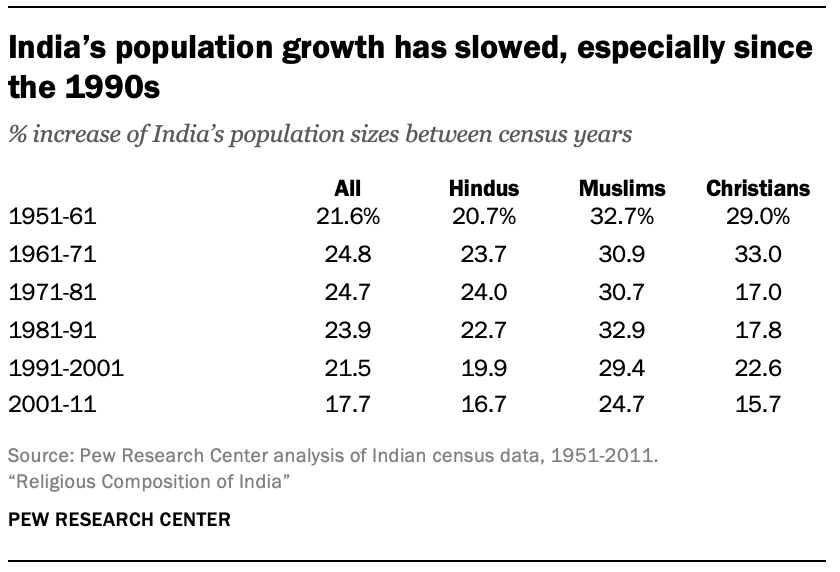 Growth rates have declined for all of India’s major religious groups, but the slowdown has been more pronounced among religious minorities, who outpaced Hindus in earlier decades. Between 1951 and 1961, the Muslim population expanded by 32.7%, 11 percentage points more than India’s overall rate of 21.6%. But this gap has narrowed. From 2001 to 2011, the difference in growth between Muslims (24.7%) and Indians overall (17.7%) was 7 percentage points. India’s Christian population grew at the slowest pace of the three largest groups in the most recent census decade – gaining 15.7% between 2001 and 2011, a far lower growth rate than the one recorded in the decade following Partition (29.0%).

In absolute numbers, all of the country’s largest religious groups are still gaining millions (tens of lakhs) of adherents. In the most recent decade between censuses, Hindus added 138 million (13.8 crore) people, while Muslims grew by 34 million (3.4 crore). India’s total population increased by nearly 200 million (2o crore) in that time, from about 1 billion (100 crore) in 2001 to 1.2 billion (120 crore) in 2011.

According to a 2015 Pew Research Center study, about 94% of the world’s Hindus now live in India, which along with Nepal is one of only two countries with a Hindu majority. India is also home to one of the world’s largest Muslim populations, surpassed only by Indonesia, which had 209 million (20.9 crore) Muslims in 2010. Pakistan’s Muslim population is roughly the same size as India’s. Bangladesh follows in fourth place, with 134 million (13.4 crore) Muslims. (Modern-day Bangladesh was part of Pakistan at the time of Partition but seceded in the 1970s.) Pakistan and Bangladesh are both overwhelmingly Muslim, but the overall populations of these countries are much smaller than India’s.

In percentage terms, India’s six largest religious groups have remained relatively stable since Partition. The greatest shift has been a modest rise in the share of Muslims, accompanied by a corresponding decline in the share of Hindus. Between 1951 and 2011, Muslims grew by 4.4 percentage points to 14.2% of the population, while Hindus declined by 4.3 points to 79.8%.

Christians have made up between 2% and 3% of India’s population in every census since 1951. Although there are concerns that Christians may be undercounted, it is difficult to determine the extent of such an undercount and how it may be changing over time.6 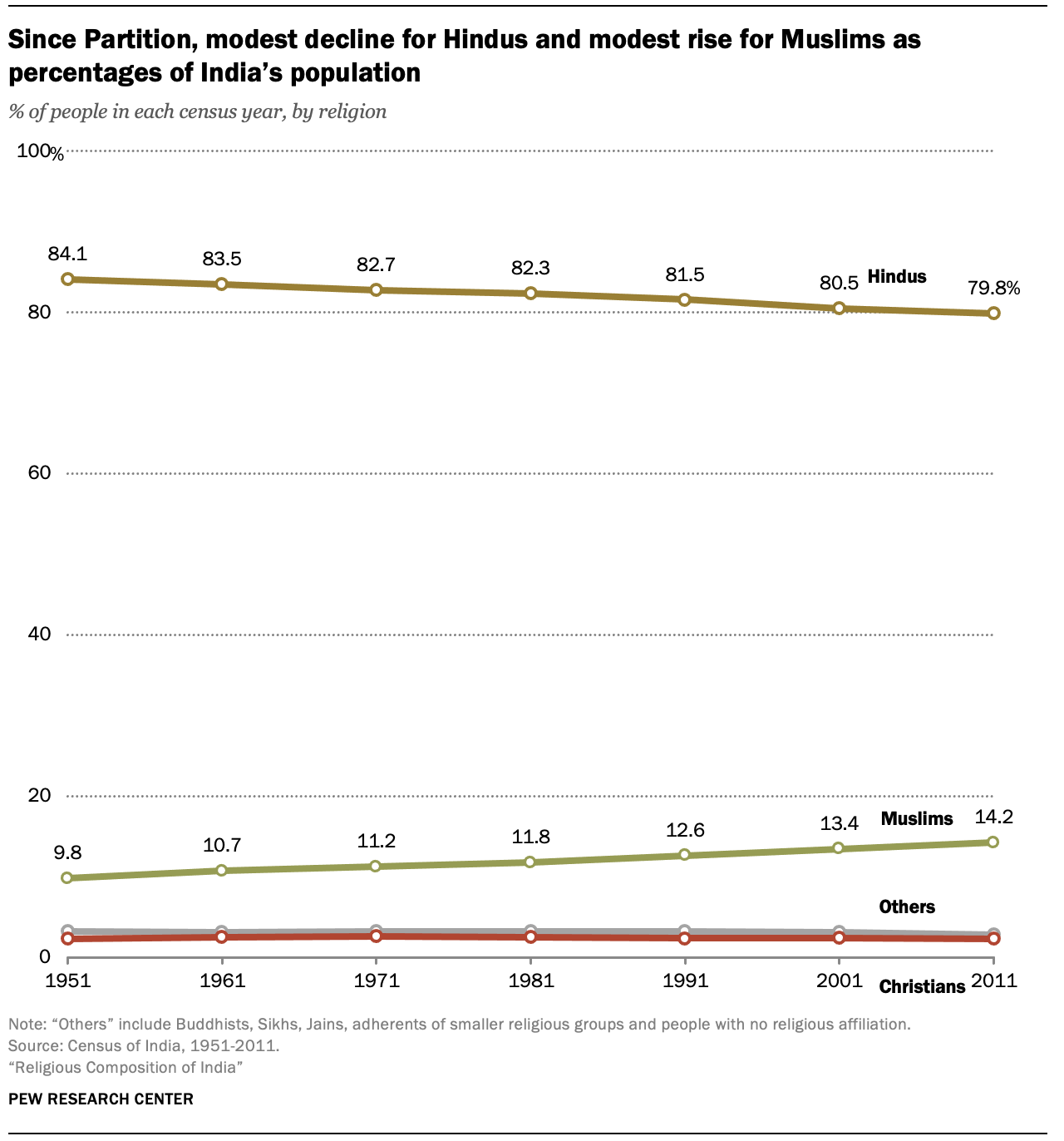 The 3% of Indians who identify with religions other than Hinduism, Islam or Christianity have grown to represent tens of millions (crores) of people in the decades since independence. Sikhs, India’s fourth-largest religious group, have increased from 7 million (70 lakh) adherents in 1951 to nearly 21 million (2.1 crore) in 2011, while remaining a consistent share of India’s population (just under 2%). Buddhists and Jains show a similar pattern – their numbers have doubled or tripled over the decades, while their shares have held steady, both under 1%. 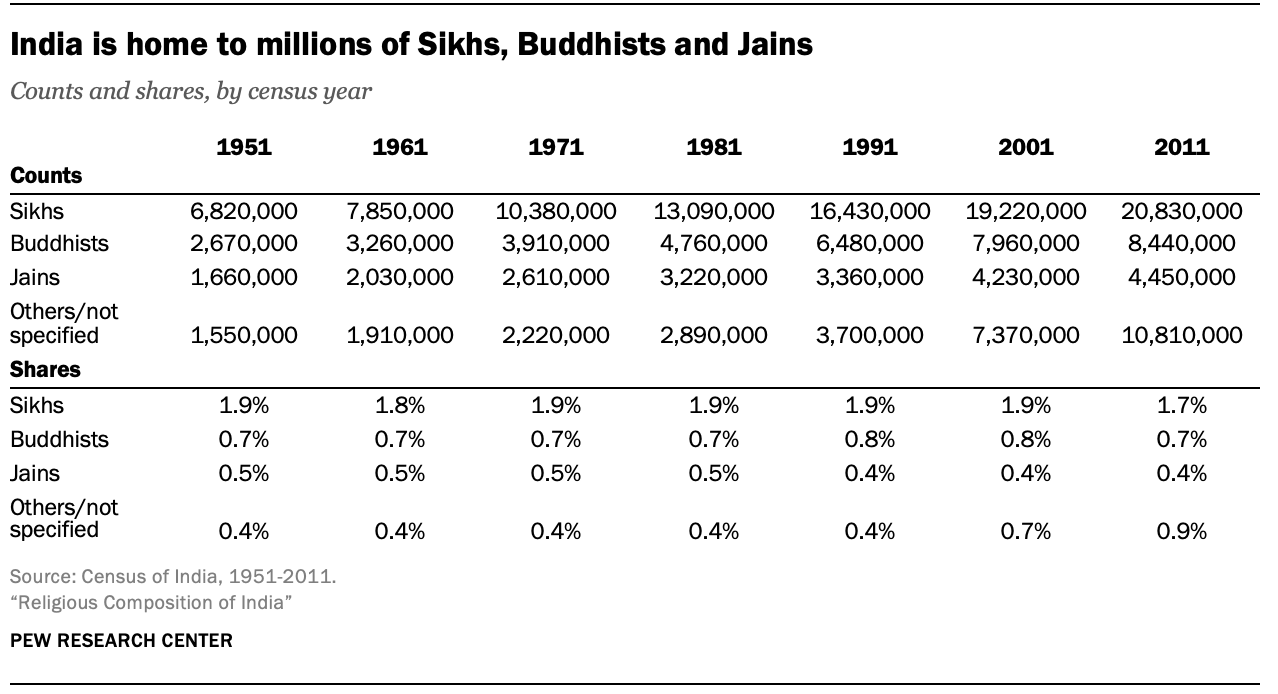 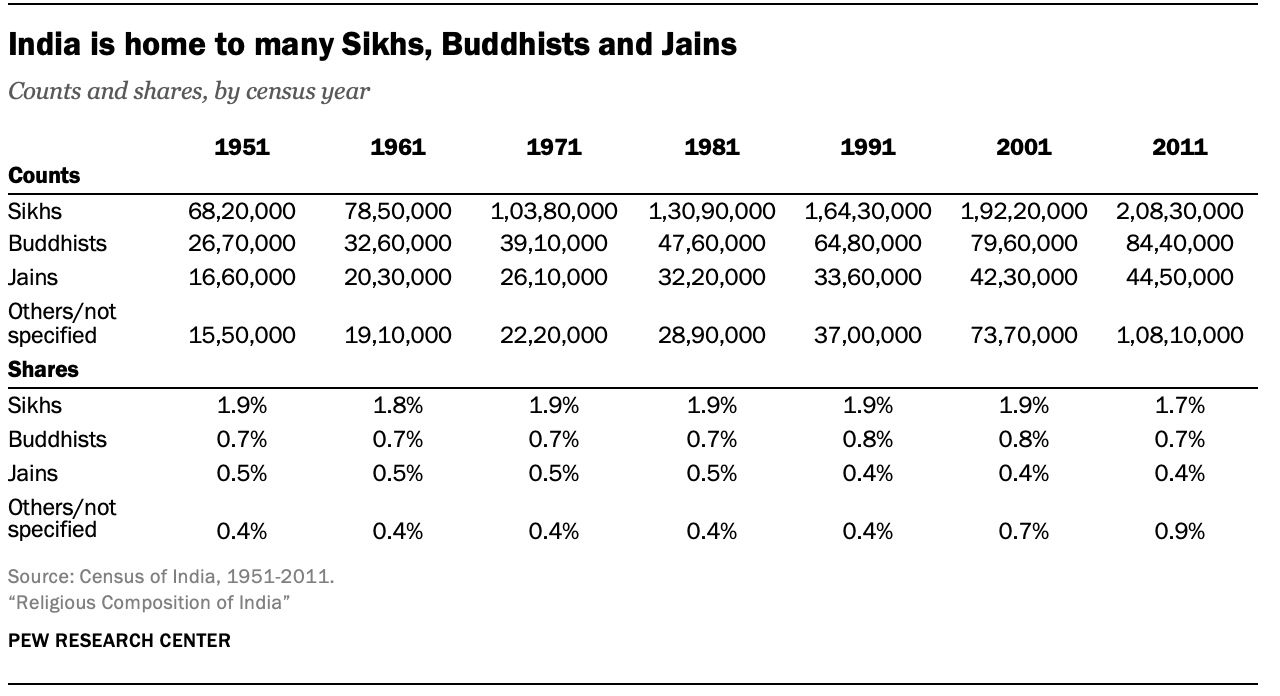 The geographic distribution of religious groups also has remained relatively stable since Partition. The largest numbers of Christians are still concentrated in the Southern states of Kerala and Tamil Nadu, and their largest population shares are in the smaller Northeastern states that border China, Bhutan, Myanmar (also called Burma) and Bangladesh. Jammu and Kashmir, adjacent to Pakistan, is the only place in which the majority of the population is Muslim, except for the sparsely populated archipelago of Lakshadweep. Buddhists and Jains are most often found in Maharashtra, and Sikhs in the Northwestern state of Punjab, where they make up a majority. Nearly every other state and territory has a large Hindu majority. (See Chapter 3 for more information on the religious demography of India’s states and territories.)

Roughly 8 million (80 lakh) people said in the 2011 census that they did not belong to any of the six largest religious groups. Nearly all of these people volunteered some other religious affiliation; only about 30,000 Indians described themselves as atheists.

The religion question on the Indian census is open-ended, meaning that people are free to give any answer they like. Besides Hindus, Muslims, Christians, Buddhists, Sikhs and Jains, there are 83 smaller religious groups that each had at least 100 self-declared adherents in the 2011 census. Within this category, most people belong to tribal or indigenous religions. Sarna is by far the largest, with nearly 5 million (50 lakh) adherents, followed by Gond (about 1 million, or 10 lakh) and Sari Dharma (510,000, or 5,10,000 in India’s system).

India’s Parsis (who trace their ancestry to Zoroastrians in Persia) are unusual in that their population has declined in absolute numbers since Partition, even as the overall population has boomed. This trend can be largely attributed to the group’s high median age and low fertility rate – more Indian Parsis are dying than are being born. In 1951, they were already a small minority with about 110,000 adherents (1,10,000); they have almost halved since then.

Jews and Baha’is in India are represented with between 4,000 and 5,000 adherents each, according to the census.

As of the publication of this demographic study, India’s 2021 census has been postponed due to the coronavirus pandemic, and results may not be publicly available for years after it is conducted. However, Pew Research Center in 2015 published demographic projections for the world’s largest religious groups that extend to 2050. According to that projection, India was home to about 1.4 billion (140 crore) people as of 2020. 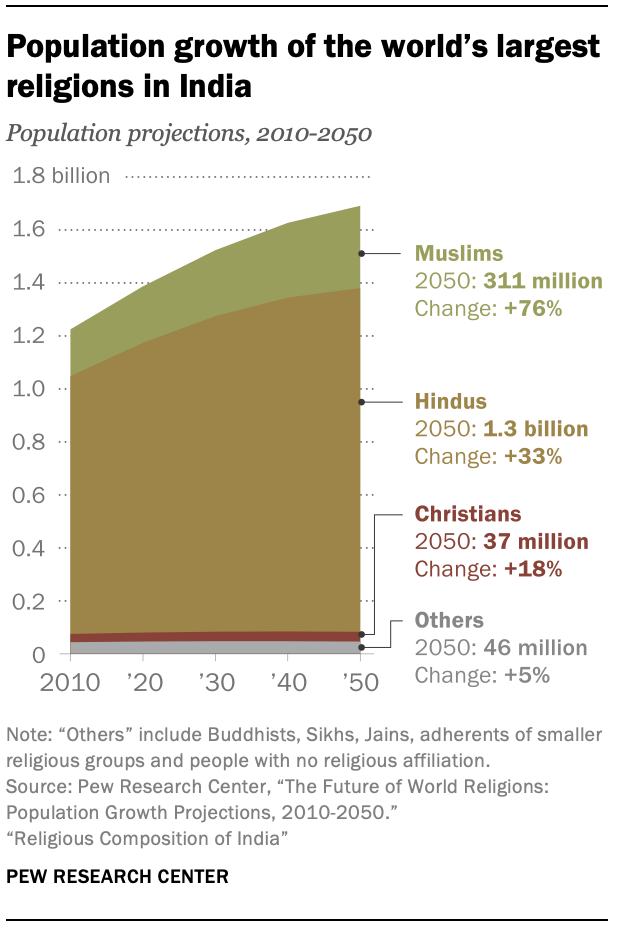 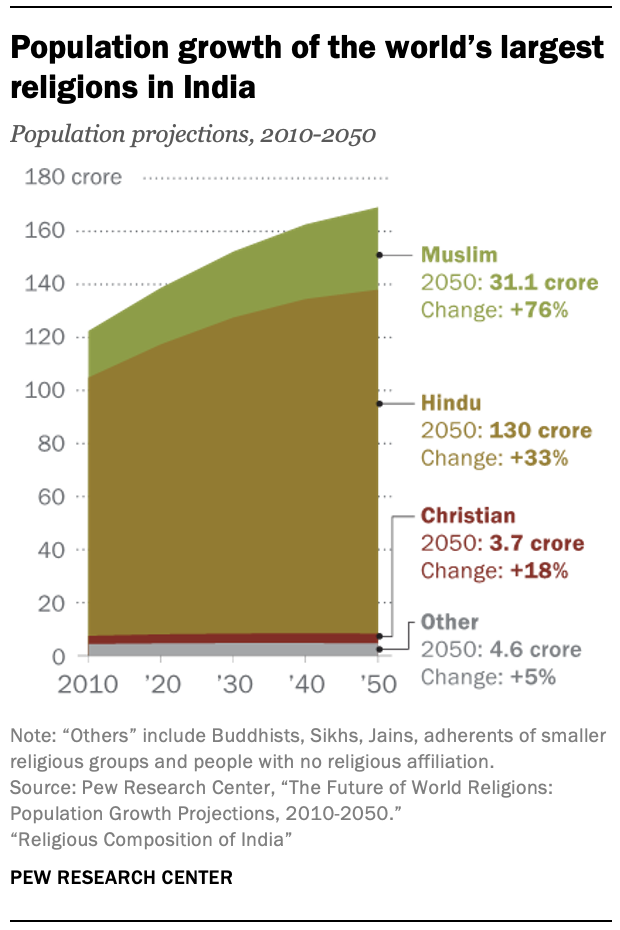 Barring dramatic changes in the trajectories of India’s populations, Muslims would be expected to continue to grow slowly as a share of the Indian population in the coming decades, while Hindus will remain a large majority.

Next: 2. Causes of religious change
← Prev Page
Page1You are reading page2Page3Page4Page5Page6
Next Page →