Pew Research Center surveys, including the 2020 study, show that Jews are among the most consistently liberal and Democratic groups in the U.S. population. Seven-in-ten Jewish adults identify with or lean toward the Democratic Party, and half describe their political views as liberal.

This general inclination toward the Democratic Party and liberal values goes hand-in-hand with disapproval of former Republican President Donald Trump. In this survey, conducted roughly five to 12 months before the 2020 presidential election, nearly three-quarters of Jewish adults disapproved of the job Trump was doing as president, while just 27% rated him positively – far below the 65% who approved of President Barack Obama’s job performance in 2013.

Orthodox Jews, however, stand out as a small subgroup (roughly one-in-ten Jewish adults) whose political profile is virtually the reverse of Jews as a whole: 60% of Orthodox Jews describe their political views as conservative, 75% identify as Republicans or lean toward the GOP, and 81% approved of Trump’s job performance at the time of the survey. 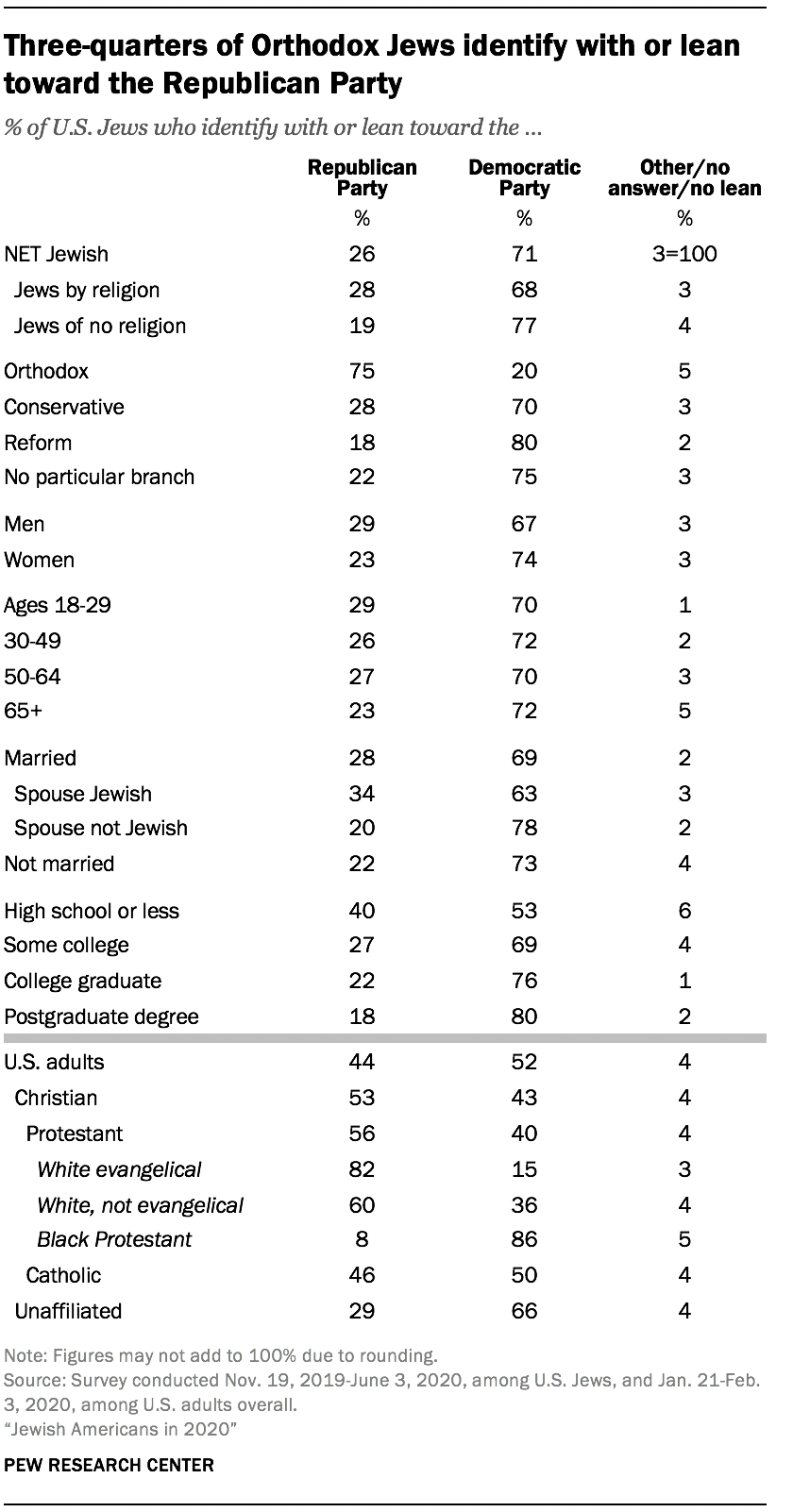 Jews by religion are considerably more likely than U.S. Christians to identify with or lean toward the Democratic Party; they look much more similar to religiously unaffiliated Americans in this regard, with Democrats making up about two-thirds of each group. Among Christian subgroups, only Black Protestants show higher levels of Democratic support (86%).

Pew Research Center political surveys conducted over the past two decades show Jews have consistently identified with the Democratic Party over the GOP by a wide margin. 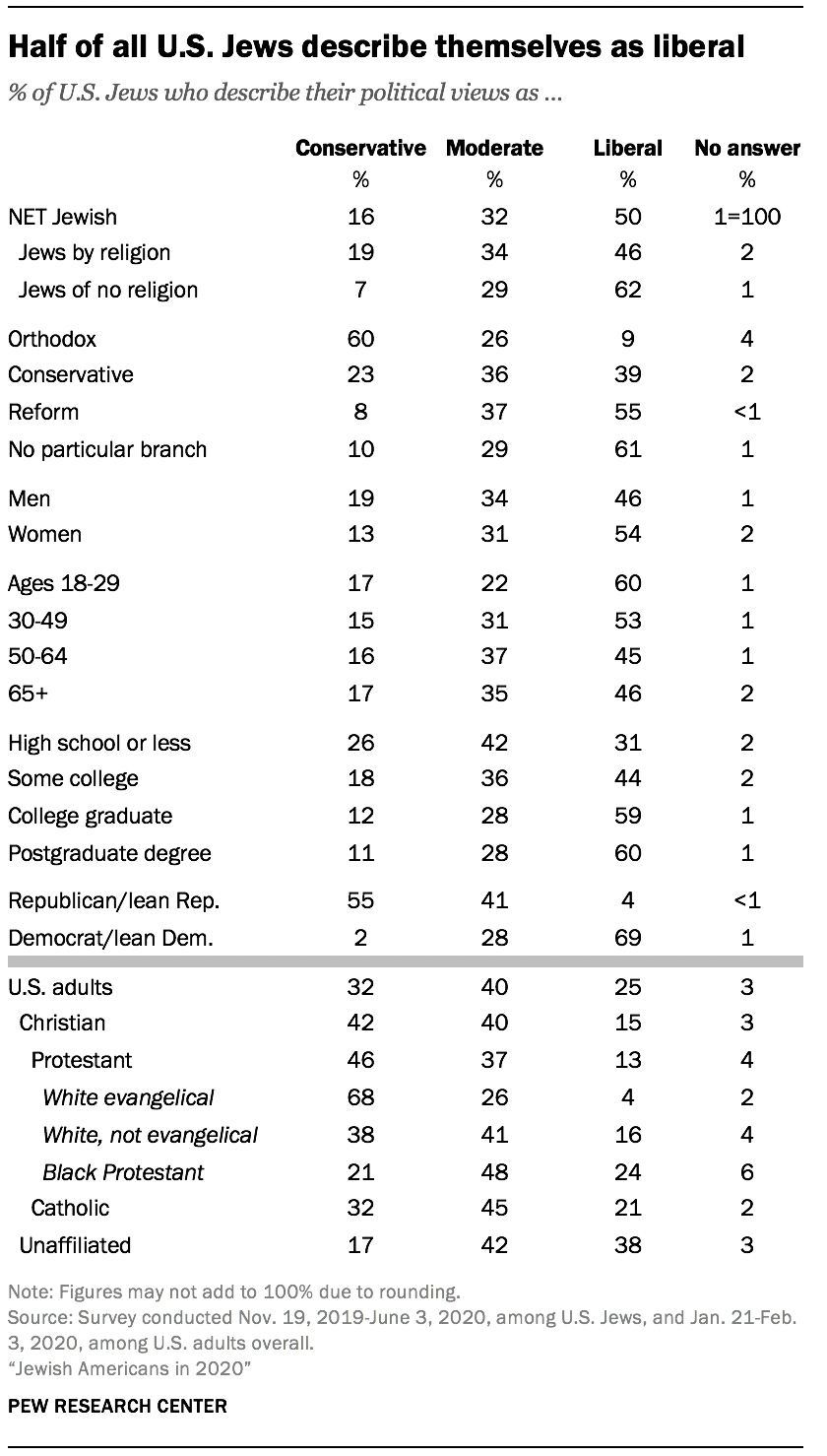 Furthermore, the new survey finds that 50% of Jews describe their political views as liberal, triple the share who say they are politically conservative (16%). Jews of no religion – a group that is considerably younger, on average, than Jews by religion – are especially likely to call themselves liberal (62%).

While Jews overall are a strongly Democratic and liberal cohort, there is one segment of the Jewish population that is notably more inclined toward conservatism and the GOP. Three-quarters of Orthodox Jews identify with or lean toward the Republican Party, more than three times the share who identify with or lean toward the Democrats (20%). And 60% of Orthodox Jews describe their political views as conservative. Indeed, Orthodox Jews are about as likely as White evangelical Protestants to favor the GOP and describe their political views as conservative. 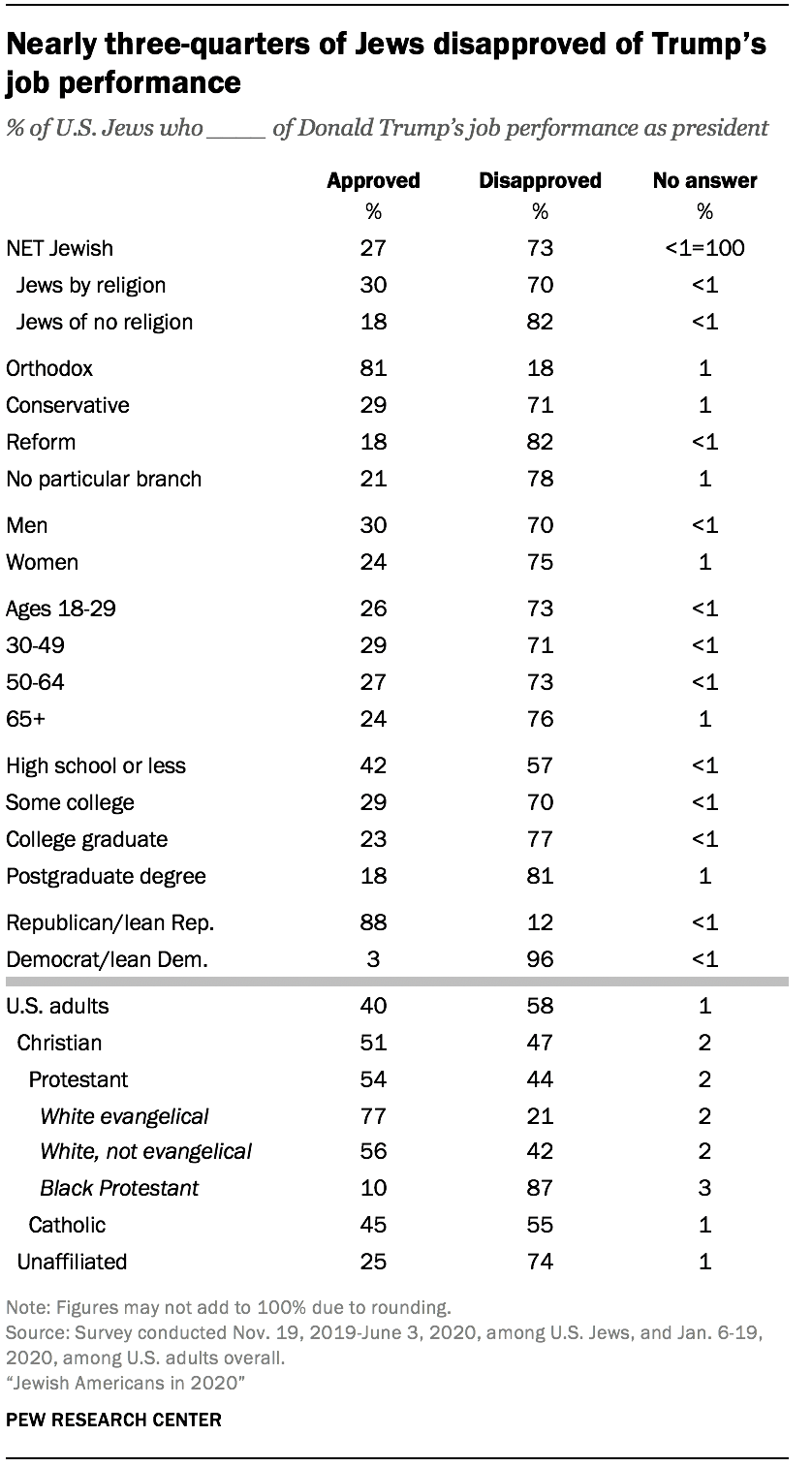 The status of Jews as a predominantly Democratic and liberal group (as well as one that is highly educated and disproportionately concentrated in the Northeast) leaves few surprises in their overall views of Donald Trump. At the time of the survey, about three-quarters of U.S. Jews (73%) said they disapproved of the job Trump was doing as president. By comparison, in a Pew Research Center survey of the general public conducted in January 2020, 58% of U.S. adults said they disapproved of Trump’s job performance.32

Trump’s approval ratings were low across almost all Jewish subgroups. Substantial majorities of both Jewish women (75%) and men (70%) as well as Jews in all age groups disapproved of Trump’s performance. Jews with relatively low levels of education (high school or less) were more likely than college graduates to give Trump a favorable rating, but even in this group, a slight majority (57%) disapproved of Trump’s handling of the presidency.

The main exception (other than Jewish Republicans) was Orthodox Jews, 81% of whom approved of the job Trump was doing as president. 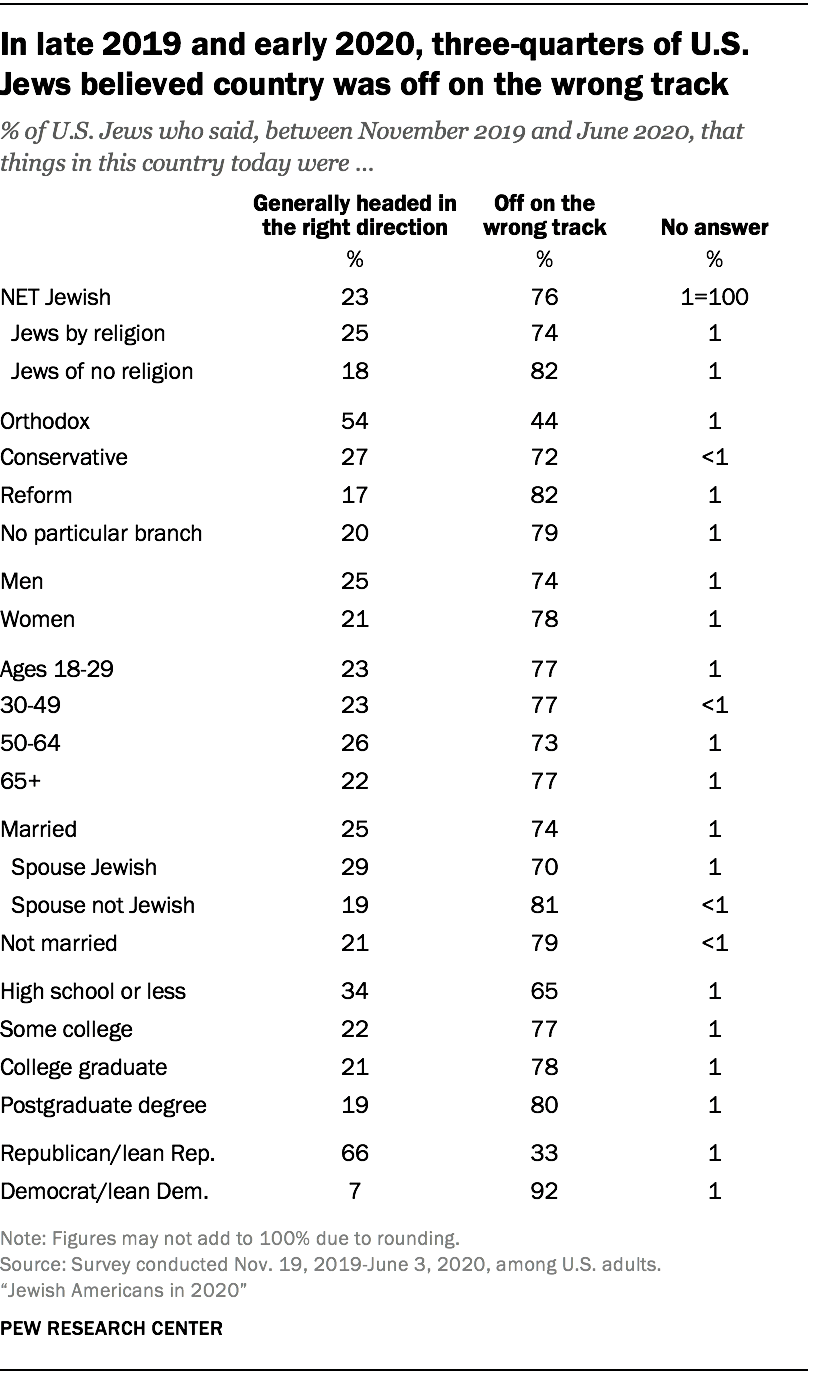 At the time the survey was fielded – while Trump was still president but mostly before the coronavirus pandemic began to have a large impact on American life – a large majority of Jews were dissatisfied with the country’s general direction. When asked whether things in this country were “generally headed in the right direction” or “off on the wrong track,” about three-quarters of Jews overall said the country was on the wrong track (76%).

Jewish Republicans, however, were largely satisfied with the direction of the country. Two-thirds of Jewish adults who identify with or lean toward the GOP said the country was headed in the right direction, a feeling shared by 54% of Orthodox Jews – and just 7% of Jewish Democrats. 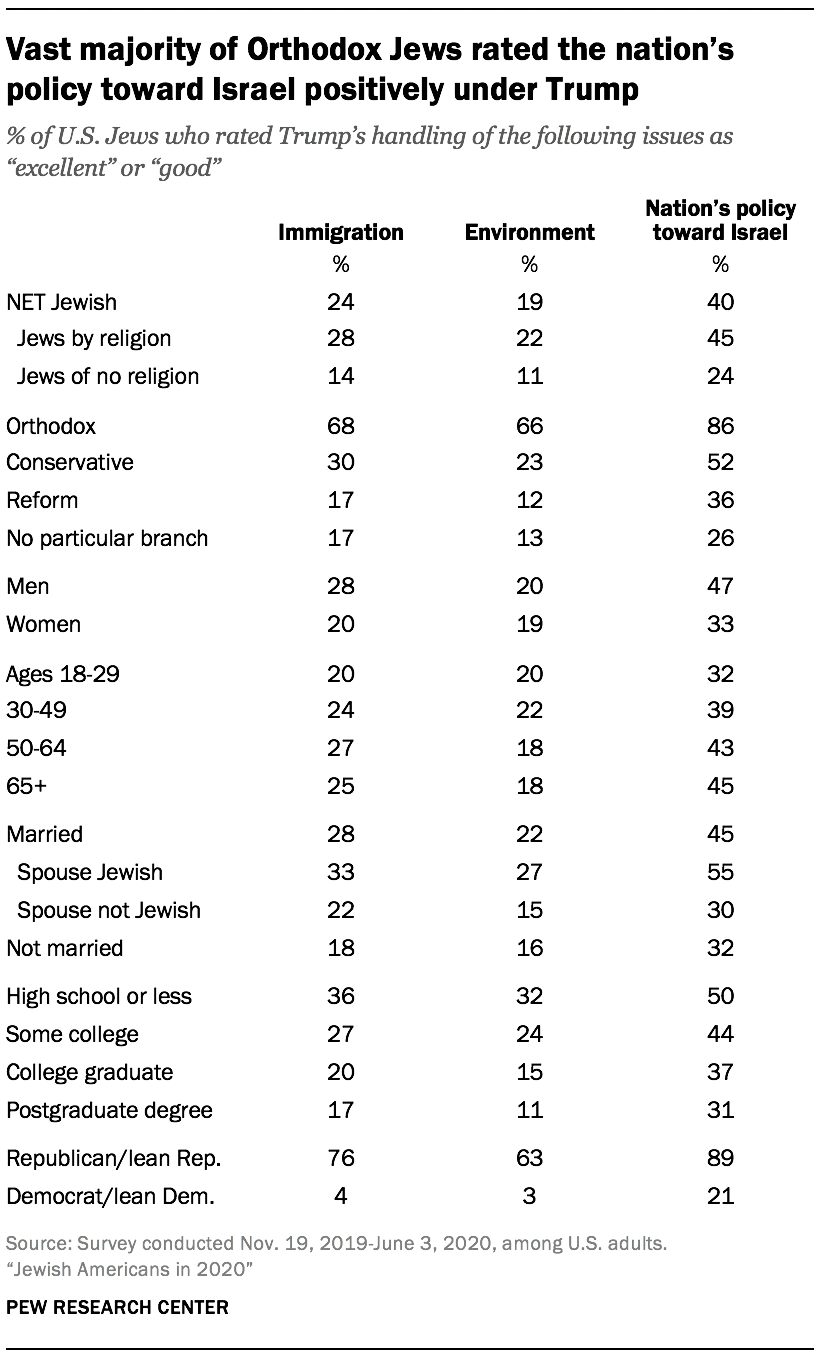 The general disapproval of Trump among U.S. Jews extended to his handling of specific issues. For example, only about a quarter of Jewish adults rated Trump’s handling of immigration as excellent (14%) or good (10%), while three-quarters called it only fair (7%) or poor (67%). Even fewer Jews gave Trump excellent or good marks for his handling of the environment (19%).

Jews by religion were much more likely than Jews of no religion to give positive ratings to Trump’s Israel policy (45% vs. 24%). And Orthodox Jews stood out for their overwhelming approval of Trump’s approach to the Jewish state: Nearly nine-in-ten Orthodox Jews said Trump’s handling of U.S. policy toward Israel was either good (16%) or excellent (69%). About two-thirds of the Orthodox also expressed positive views on Trump’s handling of immigration and the environment.

Most Jews thought Trump was friendly toward Israel, less so toward U.S. Jews

Even among Jewish Democrats, more than half described Trump (55%) and the GOP (53%) as friendly toward Israel, although these figures were much lower than the comparable shares among Jewish Republicans (85% and 73%, respectively).

Older Jews and those with college degrees were more likely than those who are younger and less highly educated, respectively, to describe the Democratic Party as friendly toward Israel. 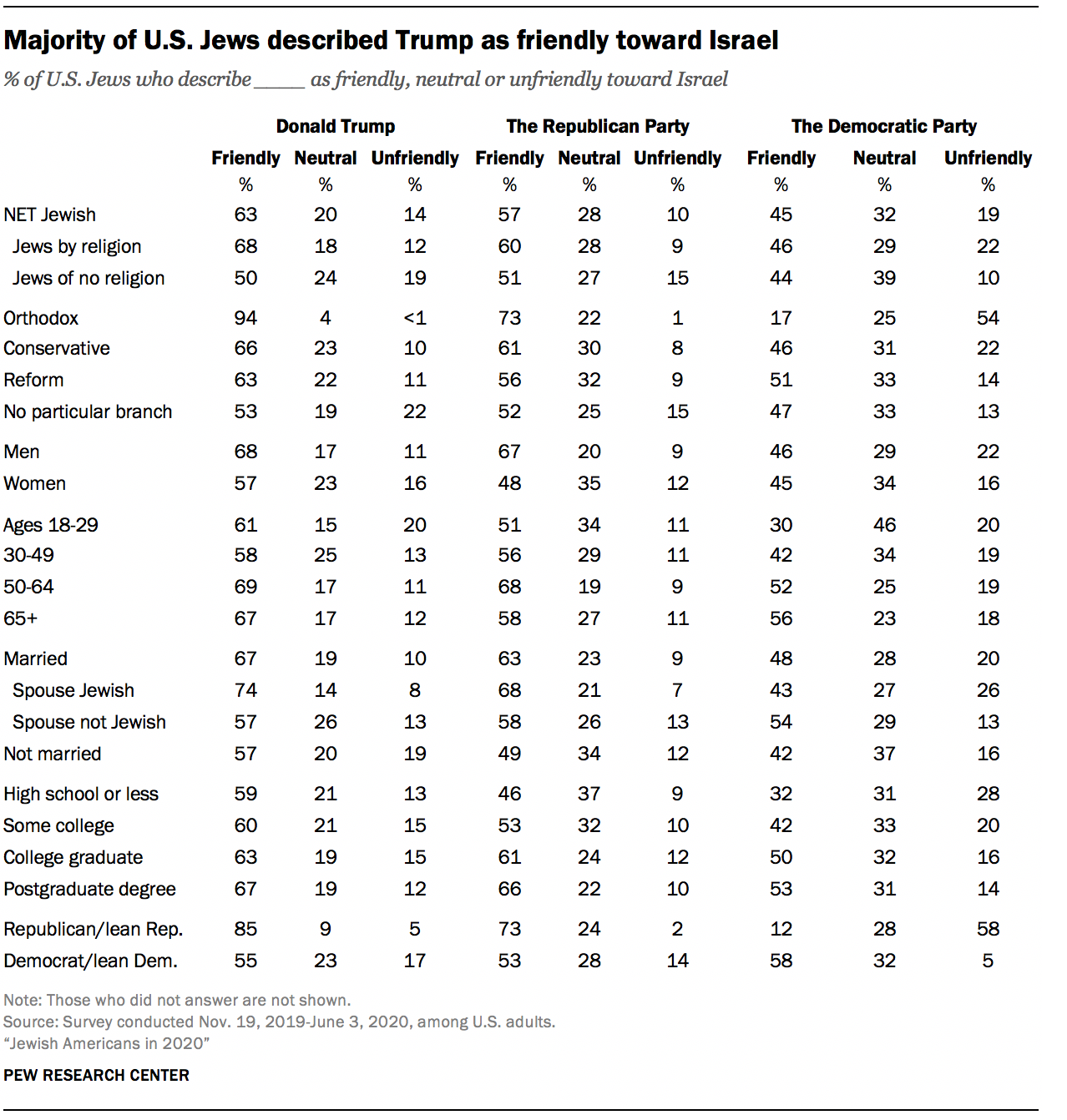 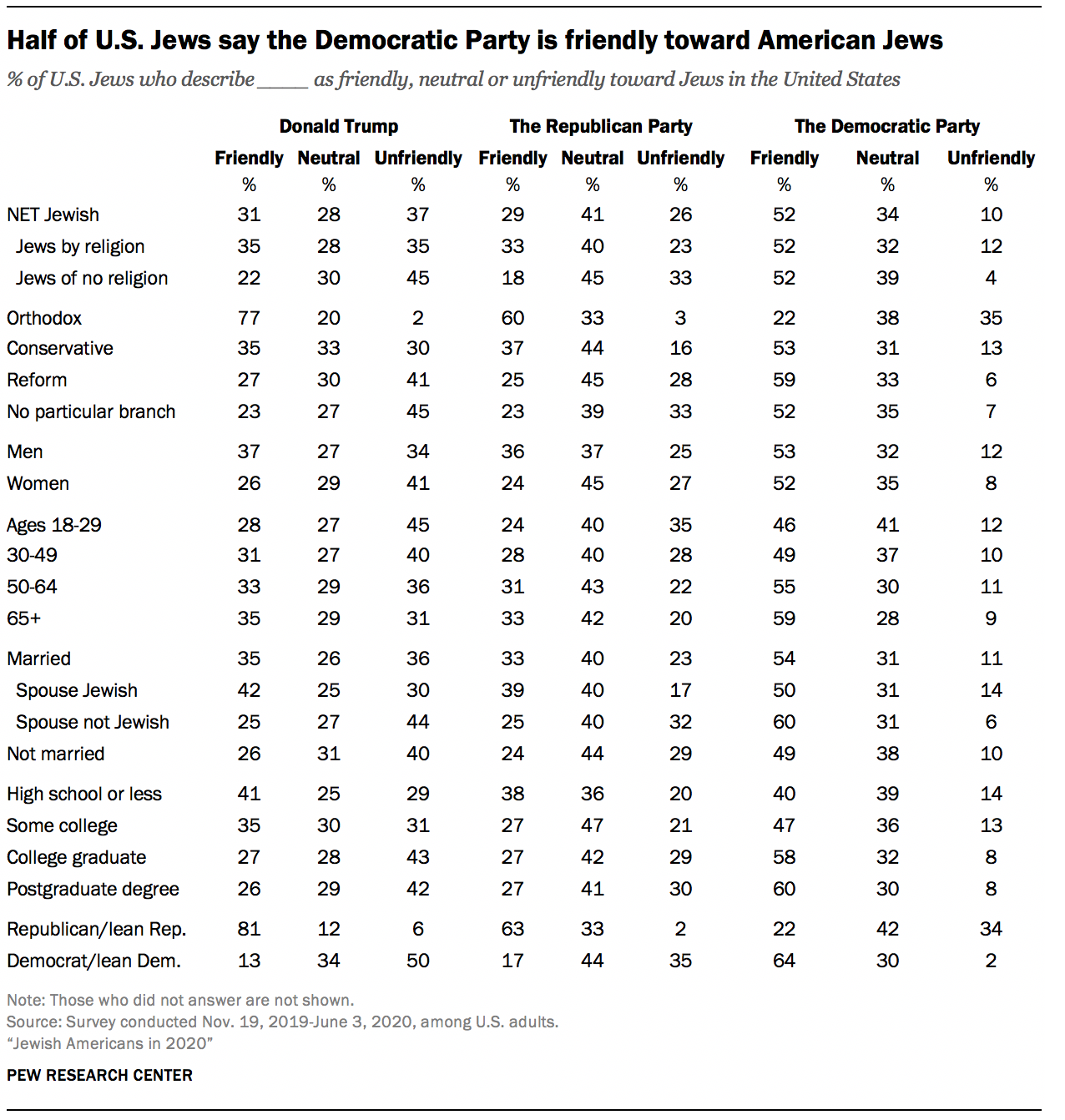