About three-quarters of Americans say they try to talk to God or another higher power. And 28% indicate that their attempts at communication are answered, saying God or the spiritual force in the universe talks directly with them.

Compared with Christians, fewer Jews (63%) say they communicate with God, and just one-in-ten U.S. Jews (9%) say God talks to them. Even fewer religious “nones” (46%) say they speak to God or a higher power they believe in, but among the subset of “nones” who describe their religion as “nothing in particular,” two-thirds (65%) say they do indeed try to talk to the deity – and roughly one-in-five say God talks back.

As with so many other measures of belief and engagement with the divine, women are more likely than men to say they communicate with God, and those over 50 are more likely than younger adults to say this. Talking to God is less common among college graduates than among those with less education.

When asked whether they have ever been protected by God, three-quarters of Americans (including 93% of Christians) say yes. And two-thirds of U.S. adults (including about eight-in-ten Christians) say they have been rewarded by God at some point in their lives. Far fewer people – just four-in-ten U.S. adults and 47% of Christians – say there has been a time when they were punished by God. 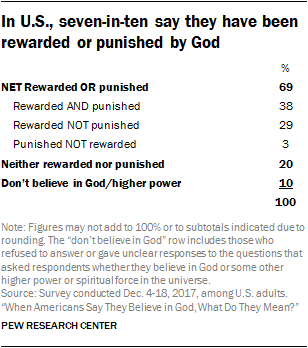 This relative optimism about God’s involvement in life is consistent with previous studies that have shown, for example, that the share of Americans who believe in heaven is significantly larger than the share who believe in hell.

Among demographic groups, more women than men see God at work in all or most of what happens in their lives. There is also a big gap between college graduates and those with less education. Among adults who have a high school degree or less education, a majority (59%) believe God is largely or entirely responsible for what happens to them; roughly a quarter believe God hardly ever or never determines the course of their lives (17%) or reject belief in a higher power altogether (6%). By contrast, among college graduates, nearly half say God determines little or nothing of what happens to them (29%) or doesn’t exist at all (16%), while only one-third see all or most of what happens to them as God’s handiwork. 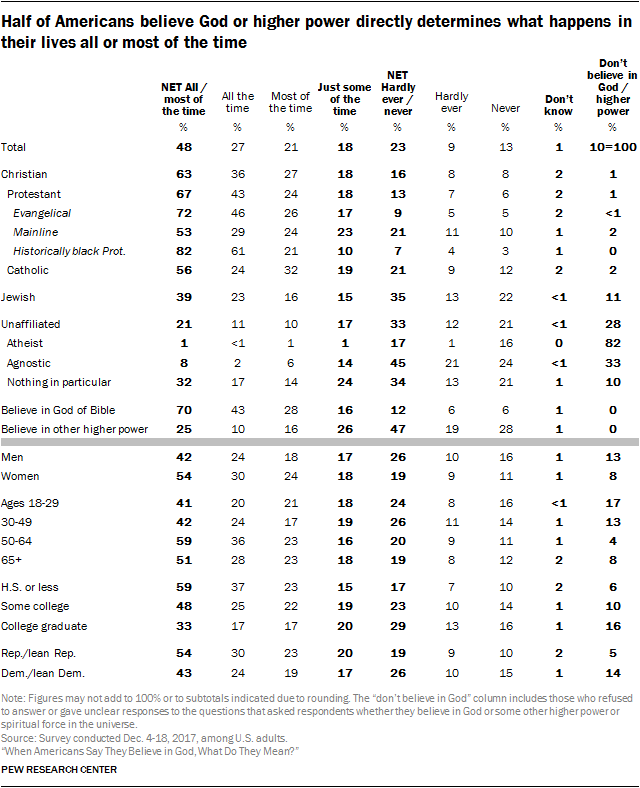 Similarly, just 5% say God is responsible for only the good things that happen to them, and 1% say God is behind only the bad events in life. Most adults see God’s hand at work in both positive and negative things. 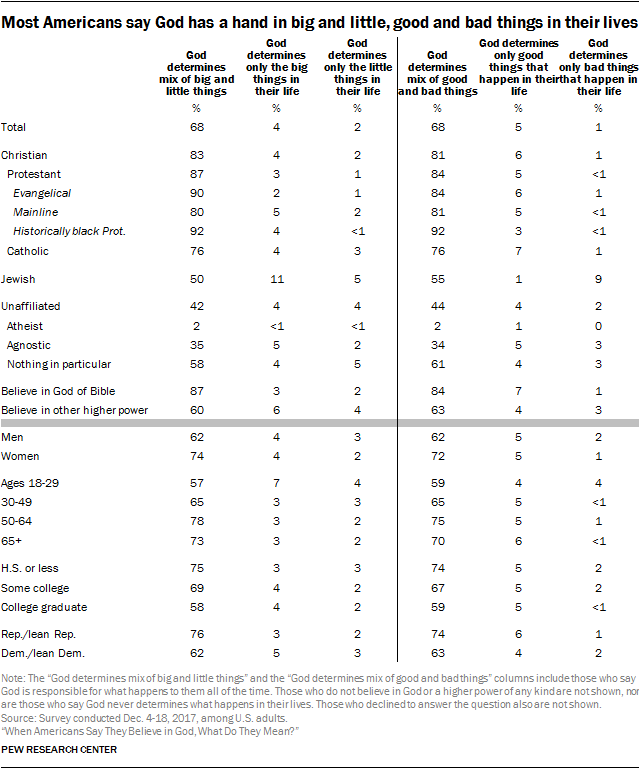 Next: Acknowledgements
← Prev Page
Page1Page2You are reading page3Page4Page5
Next Page →

When Americans Say They Believe in God, What Do They Mean? 1. Beliefs about the nature of God
2. Beliefs about God’s involvement in the world
Acknowledgements Methodology