Belief in God as described in the Bible is more common among women than men (61% vs. 50%), among older people than among younger adults, and among Republicans and those who lean toward the GOP than among Democrats (70% vs. 45%). The survey also shows that belief in the biblical God is least common among the most highly educated Americans. 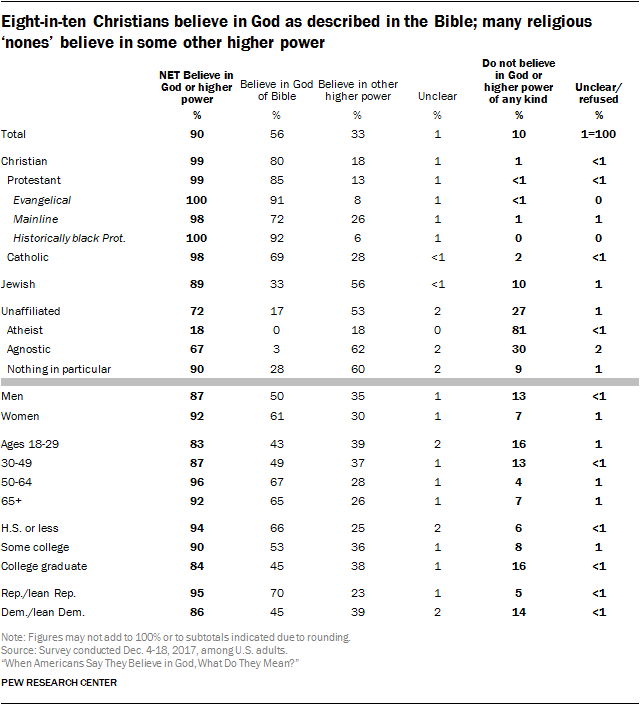 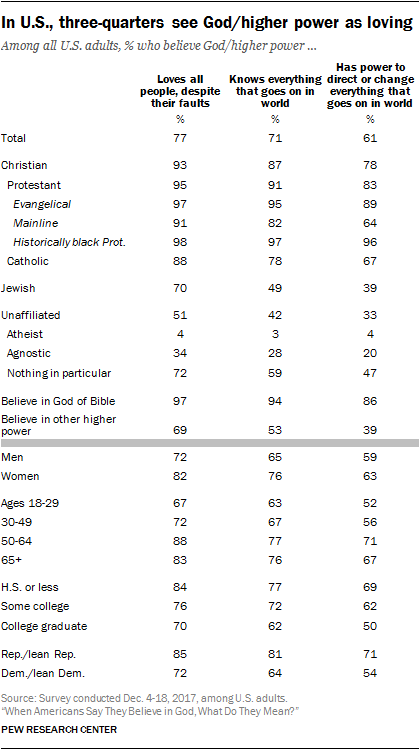 Nine-in-ten Christians say they believe God or another higher power in the universe loves all people despite their faults, and nearly as many say they think God is all-knowing. A smaller majority of Christians believe God is omnipotent, with the power to direct or change everything that goes on in the world (78%). Evangelicals and those in the historically black Protestant tradition are most likely to attribute these characteristics to God, though majorities in all Christian groups say God is loving, omniscient and omnipotent. 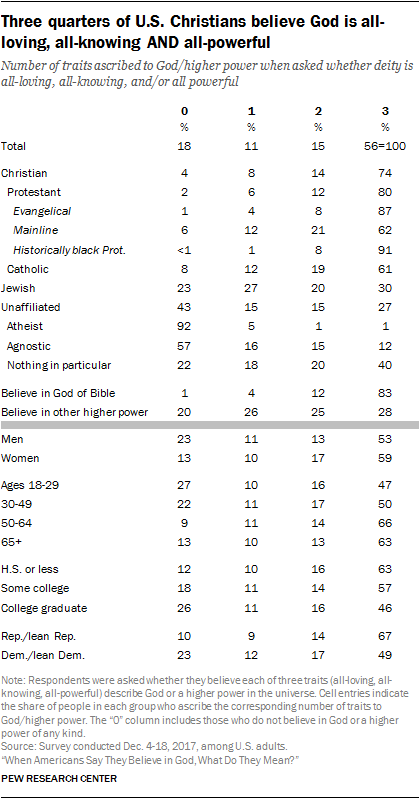 Three-quarters of U.S. Christians, including 91% of those in the historically black Protestant tradition and 87% of evangelical Protestants, believe God is all-loving, all-knowing and all-powerful. By comparison, Jews and religious “nones” are far less likely to say God (or another higher power in the universe) possesses all three of these attributes.

There are similar patterns on another question: whether God will ultimately judge all people based on what they have done in life.

Overall, six-in-ten Americans believe God or a higher power will someday judge all people. This view is most common among evangelicals (87%) and those in the historically black Protestant tradition (85%), and held by smaller majorities of other Christian groups. Most Jews and religious “nones” (some of whom do not believe in God or a higher power in the first place) reject the idea that people’s deeds will ultimately by judged by a higher power.

Seven-in-ten adults ages 50 and older think all people will ultimately face God’s judgment. By contrast, just 56% of those in their 30s and 40s and half of adults under 30 (49%) say the same.

Next: 2. Beliefs about God’s involvement in the world
← Prev Page
Page1You are reading page2Page3Page4Page5
Next Page →

When Americans Say They Believe in God, What Do They Mean?
1. Beliefs about the nature of God
2. Beliefs about God’s involvement in the world Acknowledgements Methodology