Many countries have some form of government restriction on religion, whether it involves policies that favor some groups over others or outright bans on certain worship practices. But each year, a few countries stand out as having particularly extensive restrictions.

In 2015, 23 of the 198 countries in the study had “very high” levels of government restrictions, up from 16 countries in 2014.13 Some countries – like China, Egypt, Uzbekistan, Saudi Arabia and Iran – have had very high levels of restrictions every year since 2007, the first year for which data are available. Other countries may fluctuate into and out of this top category. Eight countries had very high levels of government restrictions in 2015 but not in 2014: Vietnam, Singapore, Morocco, Algeria, Iraq, Eritrea, Brunei and Mauritania. Laos was the only country to fall out of this category in 2015. 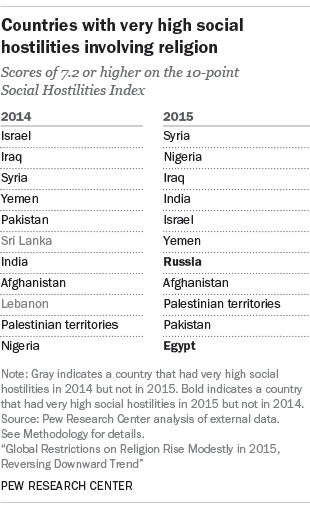 Similarly, most countries have some form of social hostilities involving religion, including social groups harassing members of a certain religion, or terrorist groups carrying out actions in the name of religion. Some countries, however, have particularly extensive social hostilities.

Eleven countries had “very high” levels of social hostilities involving religion in 2015, the same number as in 2014.15 Despite the overall number of countries in this category remaining constant, there was some movement into and out of this category in 2015. Russia and Egypt had very high levels of social hostilities in 2015, but not in 2014; meanwhile, Lebanon and Sri Lanka fell out of the “very high” category in 2015.

The number of countries with “low” levels of social hostilities involving religion dropped from 98 in 2014 to 87 in 2015. For a complete list of all countries in each category, see the Social Hostilities Index table in Appendix B.16 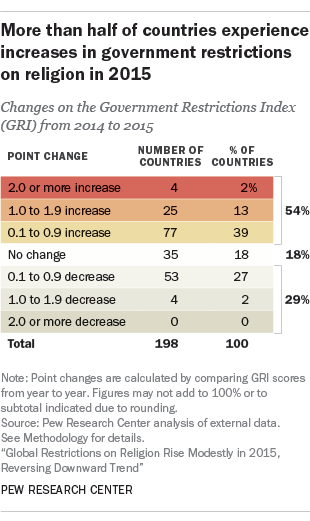 Four countries – Cameroon, Comoros, Morocco and Niger – had a large change (2.0 points or more) on the Government Restrictions Index in 2015, all in the direction of higher restrictions. Some of this increase was due to policies that targeted certain religious practices. For example, in July of 2015, the governor of Cameroon’s Far North Region banned the full-face veil after female suicide bombers wearing the religious garment killed at least 13 people in attacks.17 Similar rules were enacted in Niger, where authorities banned full-face veils after an increase in militants using these types of coverings to hide explosive devices.18

Twenty-nine countries had modest changes of between 1.0 and 1.9 points in their GRI scores. Of these countries, four – Laos, Fiji, Turkey and Uganda – had decreases. Twenty-five had increases, with the United Arab Emirates and Somalia registering the largest increases (1.8 points and 1.6 points, respectively). Both of these countries increased restrictions on worship practices of certain faiths. In Somalia, the Ministry of Religious Affairs announced a ban on Christmas celebrations just before the holiday, and the United Arab Emirates continued to prohibit “black magic, sorcery, and incantations” while also strictly regulating the building of houses of worship for non-Muslim religious groups.19

Most countries had small changes in their GRI scores (less than 1 point). Seventy-seven countries (39%) had increases in their scores, while 53 (27%) had decreases. 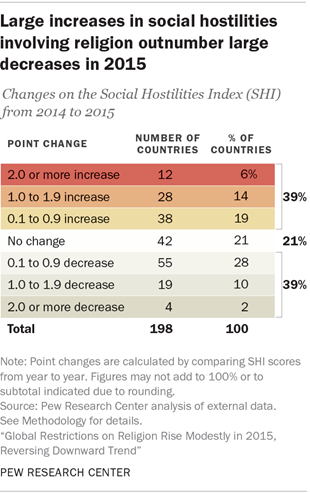 Some countries had significant changes in their Social Hostilities Index scores, regardless of whether they fell in the “very high” category.

Sixteen countries had large changes (2.0 points or more) in their SHI score from 2014 to 2015. Of these, 12 had increases and four had decreases. Switzerland, Niger, the Philippines and Nepal had the largest increases in their scores: All four countries rose from moderate levels of social hostilities to high levels in 2015.

In Switzerland, there was a rise in anti-Semitic and anti-Islamic incidents in 2015. In July, for example, several people attacked an Orthodox Jew – one of the main perpetrators of the attack spat in the man’s face and shouted “Heil Hitler!” Earlier in the year, in May, 13 Muslim gravesites were desecrated by vandals.20

And in Niger, the rising hostilities were due in part to violent protests against President Mahamadou Issoufou’s comments in support of those killed in the Charlie Hebdo shooting in Paris. Issoufou said “We are all Charlie” at an event in Paris honoring the victims of the attack, sparking two days of violence in Niger during which 10 people were killed, 177 were injured and 69 churches and Christian-owned homes were destroyed.21

The four countries with large decreases in their scores from 2014 to 2015 were Azerbaijan, Lebanon, Sweden and Sudan. In Azerbaijan, for instance, incidents of hostility from social groups toward religious groups, religion-related terrorism and violence resulting from the enforcement of religious norms all declined.

Among countries with modest changes (1.0 to 1.9 points) in their SHI scores, 28 had increases and 19 had decreases. In Saudi Arabia, for example, the increase in score was due in part to attacks throughout the year by the Islamic State militant group (also known as ISIS or ISIL). Local affiliates of the group claimed responsibility for five attacks in Saudi Arabia, including three suicide bombings at Shiite mosques and a shooting at a Shiite religious center.22

Ninety-three countries had only small changes from 2014 to 2015 (less than 1 point). Of these countries, 55 had decreases, while 38 had increases in their SHI scores.

In addition to analyzing government restrictions and social hostilities separately, Pew Research Center also considers these measures together. This provides a snapshot of the overall condition of religious restrictions in a country, both from governments and social groups.

Next: 2. Nearly all Muslims, Jews, Hindus live in countries where their group was harassed in 2015
← Prev Page
Page1You are reading page2Page3Page4Page5Page6Page7
Next Page →