Examining the world’s 25 most populous countries is a way to see the restrictions on religion that have the potential to impact the highest number of people. More than 5 billion people – about 75% of humanity – live in these 25 countries, although the populations within these nations likely do not necessarily experience government restrictions or social hostilities equally.

Among this group of populous countries, Russia, Egypt, India, Pakistan and Nigeria had the highest combined levels of government restrictions and social hostilities involving religion in 2015, while Brazil, Japan, South Africa, Ethiopia and the Philippines had the fewest restrictions and hostilities.

Looking at just government restrictions, Egypt, China, Iran, Russia and Indonesia had the highest levels in 2015, with each country falling into the “very high” restrictions category. In contrast, Brazil, Japan, the Philippines, South Africa and the United Kingdom all fell into the “low” category in 2015.

In 2015, none of the 25 most populous countries experienced a large change in its Government Restrictions Index score. Russia, the Democratic Republic of the Congo and the United States, experienced modest increases of between 1.0 and 1.9 points in their scores, while Turkey experienced a modest decrease.

Three countries – the Philippines, Germany and the Democratic Republic of the Congo – had large increases (2.0 points or more) in their Social Hostilities Index score in 2015, although none moved into the “very high” category. 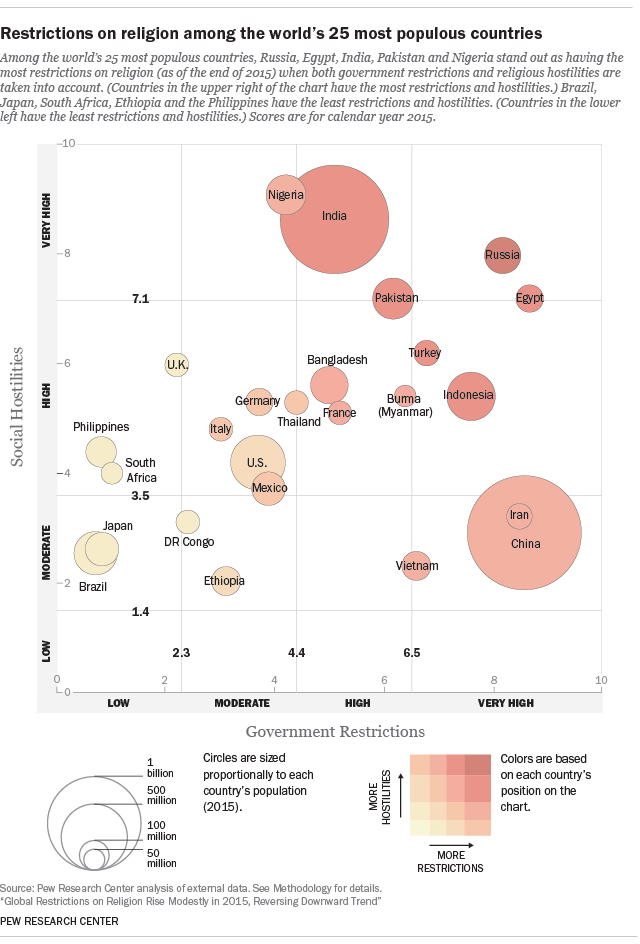