People without a religious affiliation – including atheists, agnostics and those who describe their religion as “nothing in particular” – are among the most educated of the world’s major religious groups. Globally, the vast majority (92%) of unaffiliated adults ages 25 and older have at least some basic education, nearly seven-in-ten (68%) have at least some secondary schooling and 16% have post-secondary degrees. 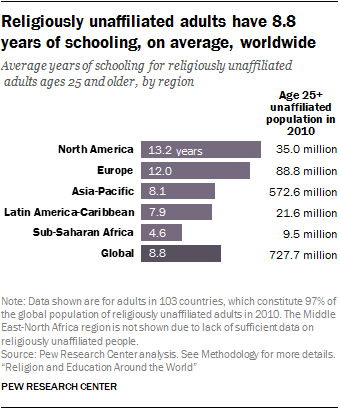 While religiously unaffiliated people, sometimes called religious “nones,” are grouped together for analytical purposes in this report, in some cases, there are important differences within this group (see sidebar later in this chapter). 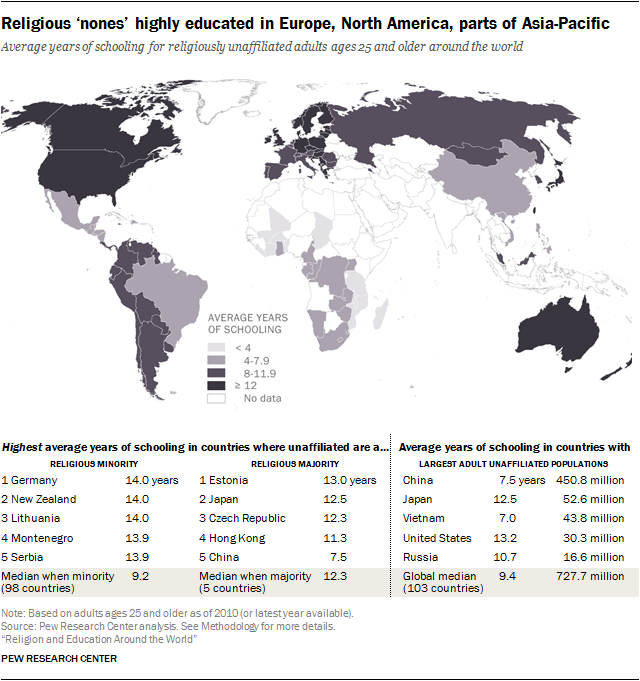 Educational attainment among the world’s more than 725 million religious “nones,” who are projected to decline as a share of the global population in the coming decades, varies from region to region. Around the world, “nones” have 8.8 years of schooling, on average. But that average ranges from a high of 13.2 years in North America to a low of 4.6 years in sub-Saharan Africa.18

The Asia-Pacific region is home to a majority (76%) of the world’s unaffiliated population – about 858.5 million people – and most of them (700.7 million) live in China. Just under two-thirds of all unaffiliated adults ages 25 and older in this region (64%) have at least a secondary education, but in the youngest generation in this study, that figure jumps to 89%. 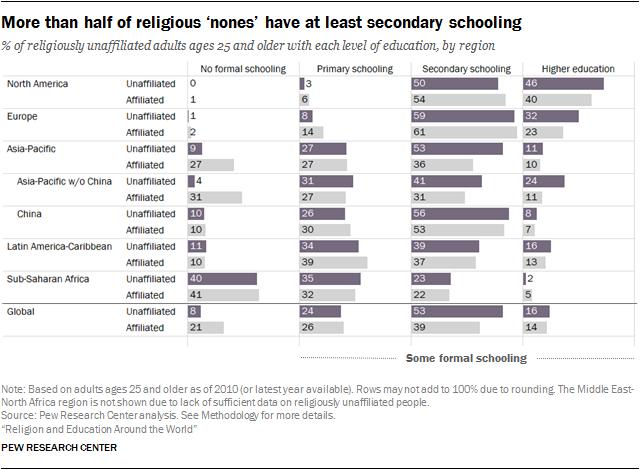 Some scholars have hypothesized that as education levels increase, many people will shed religious identity and turn to science or other nonreligious sources for answers to life’s most important questions.19 If this secularization theory is accurate, one might expect that countries with higher levels of education would have larger shares of people who do not identify with a religion, and that, on average, religiously unaffiliated people (sometimes called religious “nones”) would have higher levels of education than those who identify with a religion.

This study provides mixed evidence; there is some global data that seems to support secularization theory, but at the country level, the pattern is murky.

In countries where the religiously unaffiliated make up a large share of the population – that is, 20% or more – differences in educational attainment between the youngest cohorts of unaffiliated and affiliated people are often small. For instance, there is a difference of less than half a year of schooling between the two groups in the United States, the United Kingdom, Germany, France, Australia, New Zealand, China, South Korea, Japan and the Czech Republic.

In some countries, there are important educational differences within unaffiliated populations. Although data on the educational attainment of self-described atheists, who make up one category of religious “nones” (along with agnostics and people who describe their religion as “nothing in particular”), was not available for most countries in this report, analysis of survey data collected by Pew Research Center finds that atheists in the United States and France are significantly more likely than adults who say their religion is “nothing in particular” to have post-secondary degrees. But in Germany, Spain, United Kingdom, Australia, Uruguay and China, differences in post-secondary attainment between atheists and adults with no particular religion are not statistically significant. 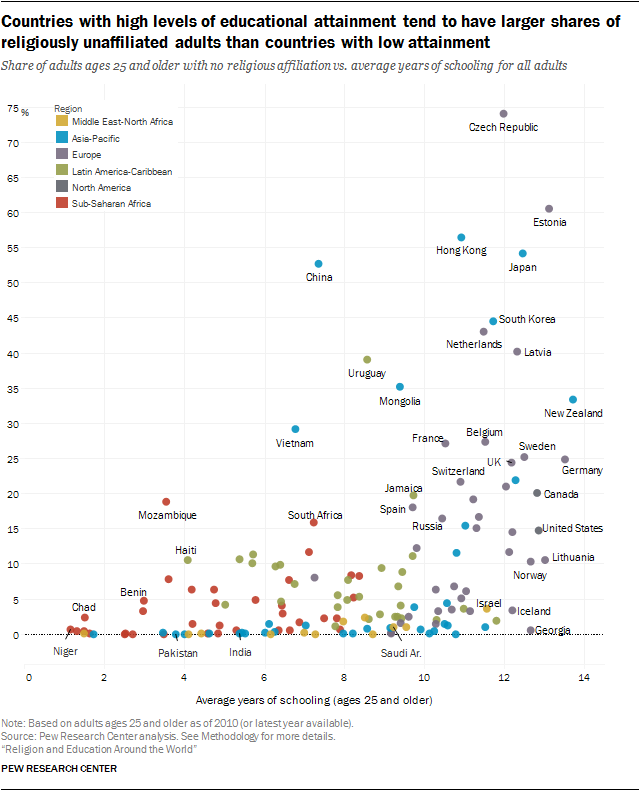 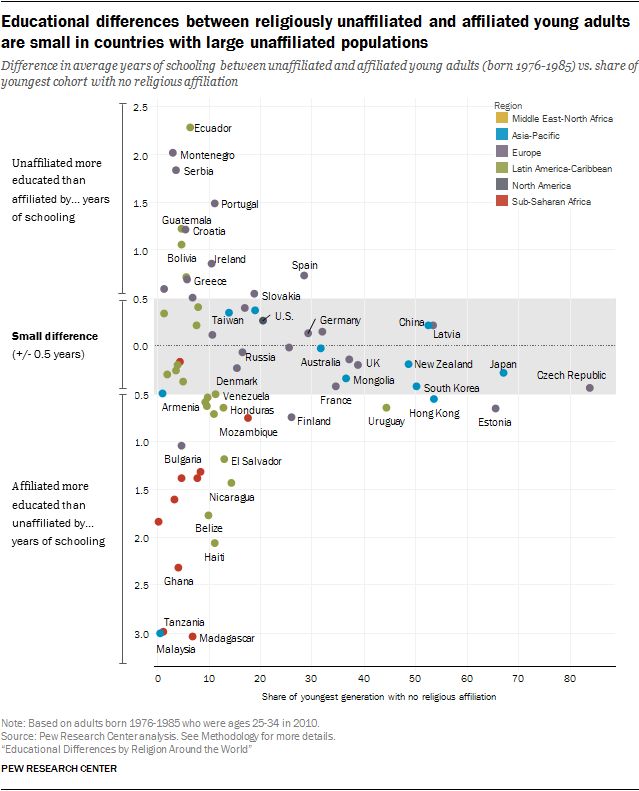 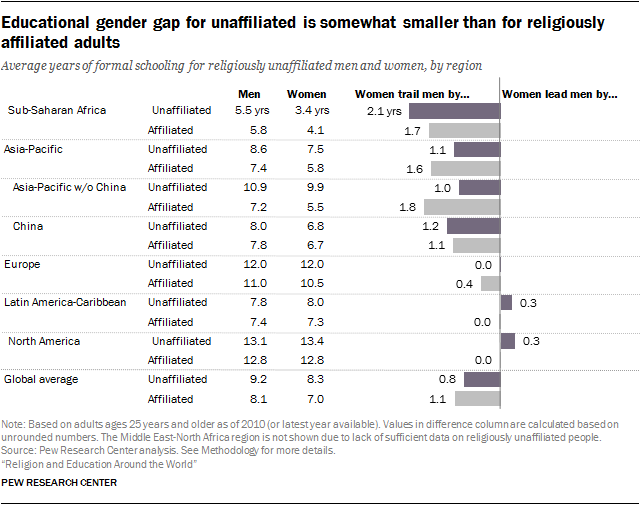 Generational changes among the unaffiliated vary, with greatest gains in Asia-Pacific

These global increases have been driven mainly by gains in the Asia-Pacific region, which saw the largest growth in average years of schooling among the unaffiliated of any region – a gain of 3.4 years, on average, across the three generations studied. 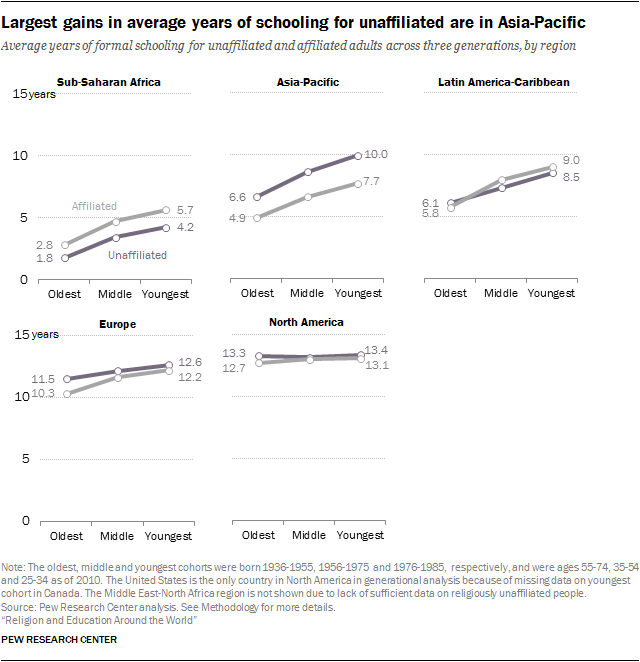 Unaffiliated adults in sub-Saharan Africa saw the largest decline (26 points) in the share with no formal schooling across generations, from 67% in the oldest to 41% in the youngest. There also are notable generational differences in Latin America and the Caribbean and the Asia-Pacific region (16 points in both regions).

Religiously unaffiliated adults worldwide also have seen increases in higher education, as the share with post-secondary degrees doubled from 12% in the oldest cohort to 24% in the youngest. 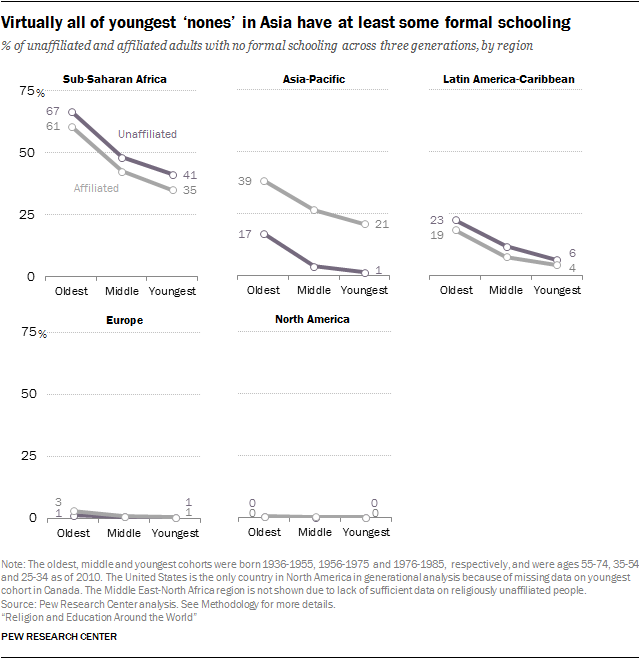 Sidebar: Educational change in China and the rest of Asia and the Pacific 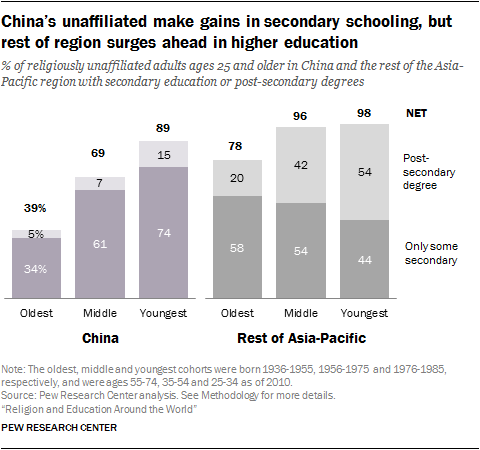 Because of this, China’s patterns of educational attainment have an overwhelming impact on the data when measuring attainment levels across the region. But the educational patterns among religious “nones” in China are very different from those in other countries in the Asia-Pacific region, so it is illuminating to look at them separately. Most notably, while China’s unaffiliated have made big gains in secondary schooling, the rest of Asia-Pacific’s religious “nones” have made gains in higher education.

Most unaffiliated Chinese adults (56%) have some secondary schooling (but no higher education), compared with 41% of the unaffiliated in other parts of the Asia-Pacific region. However, when it comes to higher education, China’s “nones” are three times less likely to have post-secondary degrees than are religious “nones” elsewhere in the region (8% vs. 24%).21

A majority of adults in the youngest generation of “nones” in the Asia-Pacific region (outside of China) have post-secondary degrees (54%). In fact, five of the seven countries and territories where the unaffiliated made the greatest gains in higher education in recent generations are in Asia: Singapore, South Korea, Japan, Hong Kong and Taiwan.22 For example, people in the youngest generation of religious “nones” in South Korea are roughly five times more likely than those in the oldest generation to have a post-secondary education (54% vs. 10%).

As a result of the strong gains made by unaffiliated women, the gender gap in higher education among the unaffiliated has reversed in Japan, South Korea, Mongolia and Hong Kong, so that women in the youngest generation are more likely than their male counterparts to have post-secondary degrees. 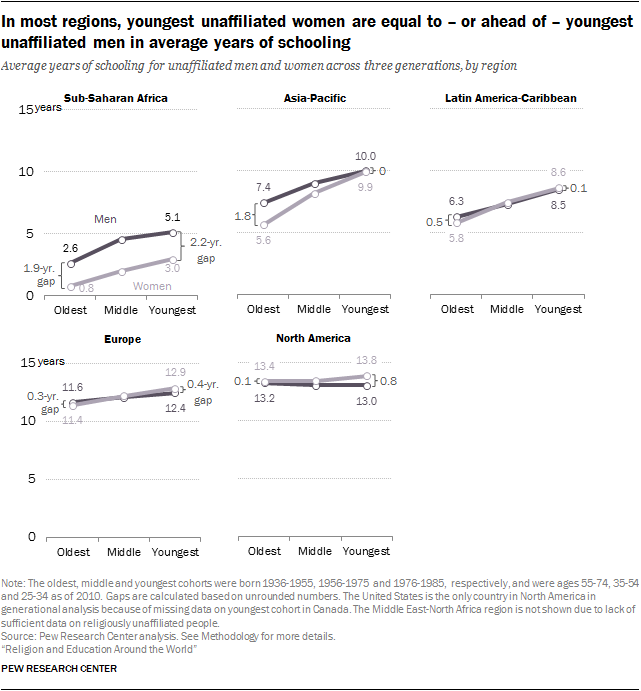 When it comes to higher education, unaffiliated women have made gains at a faster rate than men, increasing the share of those with post-secondary degrees from 10% in the study’s oldest generation to 25% in the youngest generation. At the same time, the share of unaffiliated men with post-secondary degrees went from 13% to 22%.

As a result, the unaffiliated gender gap in higher education has reversed in four regions of the world, as women in the youngest generation have become more likely than the youngest men to have post-secondary degrees. This is not the case in sub-Saharan Africa, where very few men and women have higher education.23

The U.S. is among the countries where the share of unaffiliated men with college degrees has declined across generations. Nearly half (45%) of the oldest unaffiliated men in the U.S. have post-secondary degrees, compared with 38% of the youngest. A similar trend is seen in Germany.24 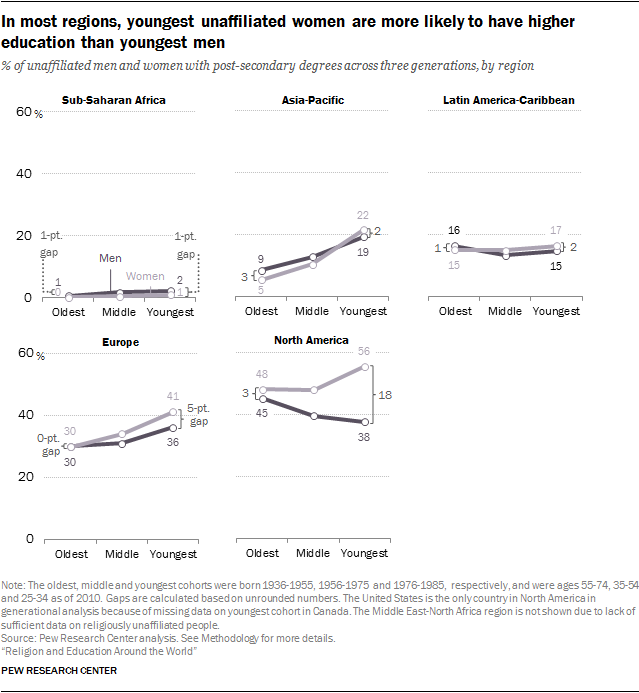