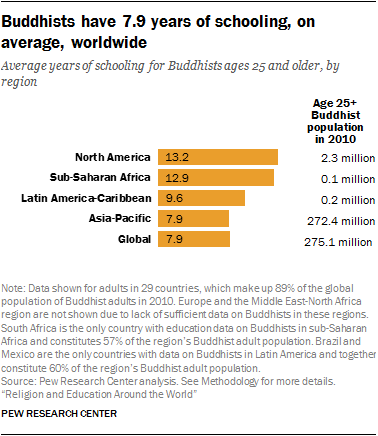 Buddhist women have made notably strong educational gains in recent generations, helping to close the gender gap in primary schooling as well as higher education. Among the youngest generation of Buddhists, men and women have nearly identical educational profiles across all measures of attainment.

In countries outside the Asia-Pacific region, where Buddhists are a religious minority, they often are more highly educated than the non-Buddhist population of those countries. In the United States, for example, Buddhists have an average of 13.4 years of schooling and more than half (53%) have post-secondary degrees, compared with an average of 12.9 years of schooling and 39% with higher education among non-Buddhists. And in the United Kingdom, Buddhists are more likely than the rest of the population to have higher education by 20 percentage points (52% vs. 32%). 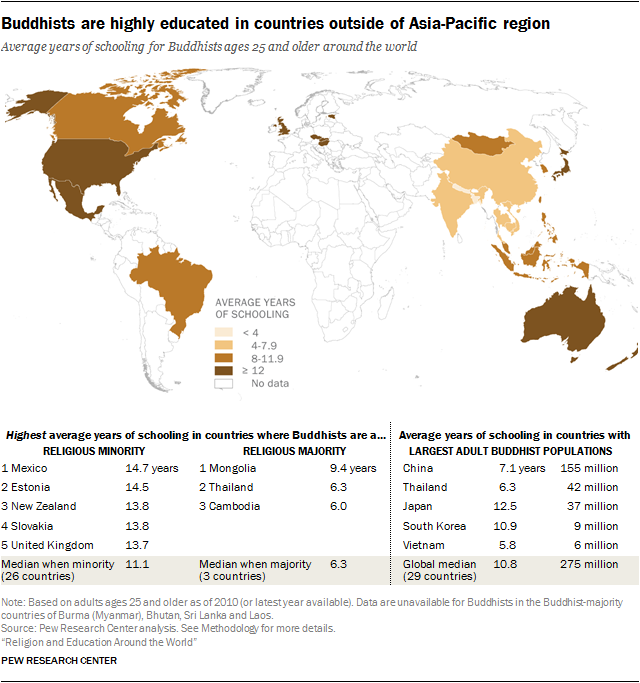 About 10% of Buddhist adults worldwide have no formal education. This includes 11% of Buddhists in China, but only 1% of those living in North America. 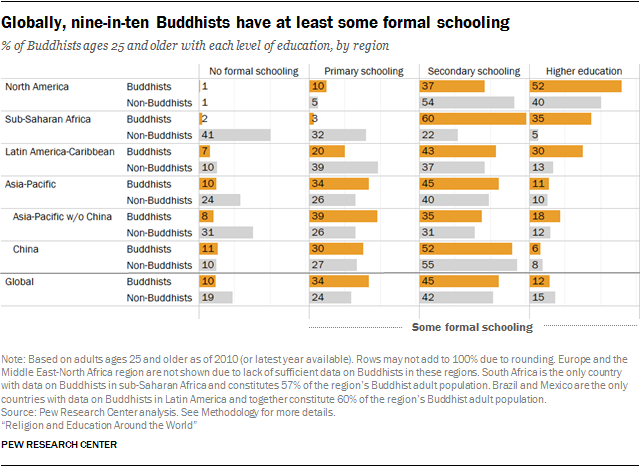 Buddhist men around the world have, on average, about one more year of schooling than women (8.5 years vs. 7.4 years). This is in line with the global gender gap for non-Buddhists (8.3 years vs. 7.2 years). Buddhist women are twice as likely as Buddhist men to have no formal education (13% vs. 6%), but women lag behind men in higher education by a smaller margin (10% vs. 13%). The educational gender gap among Buddhists is somewhat smaller in the Americas than it is in Asia. 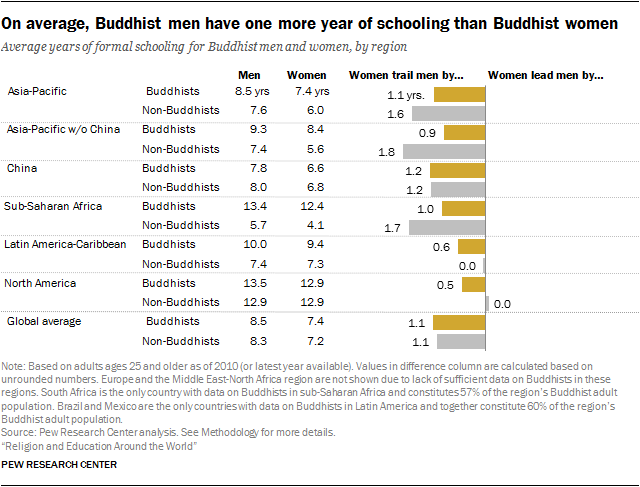 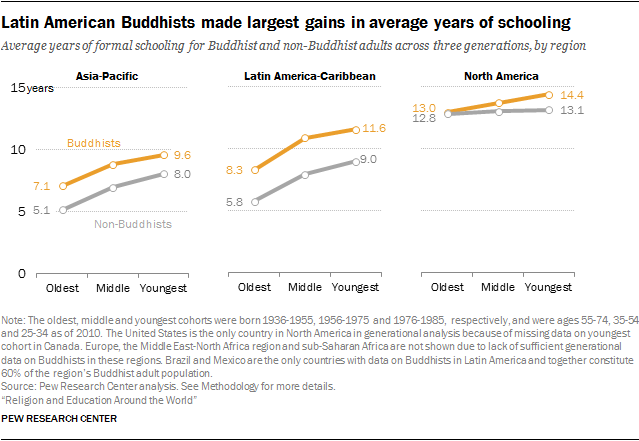 The share of Buddhists with no formal schooling decreased by 11 percentage points, from 15% in the oldest generation to 4% in the youngest. The largest decrease was in the Asia-Pacific region (11 points). In North America, virtually all Buddhists in each of the three generations analyzed have at least some basic schooling. 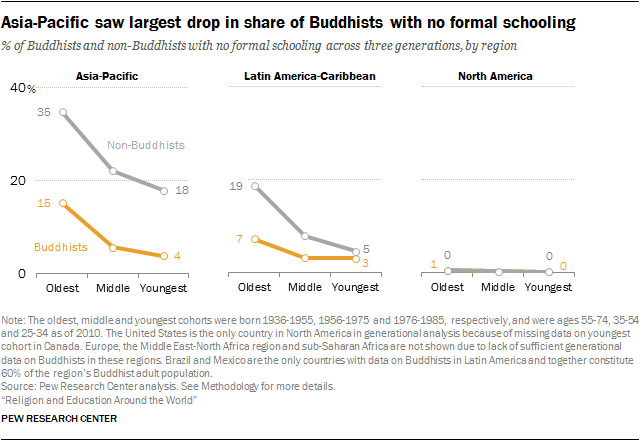 Globally, the gender gap also has closed when it comes to basic schooling. While nearly all Buddhist men in the oldest generation received some formal education (94%), about three-quarters of the oldest women did (77%). This gap has narrowed to 2 points across generations, as 97% of the youngest Buddhist men and 95% of the youngest Buddhist women have at least some formal education.

These generational changes in the gender gap by this measure have been largest in the Asia-Pacific region, and particularly in China. Three-in-ten of the oldest Buddhist women in China (30%) have no formal schooling, compared with just 7% of the oldest Buddhist men. But among those in China’s youngest generation, nearly all Buddhist men and women have received at least some formal schooling (99% of men and 98% of women). 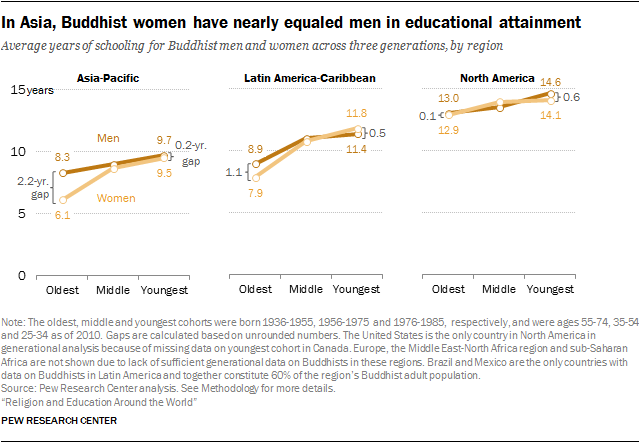 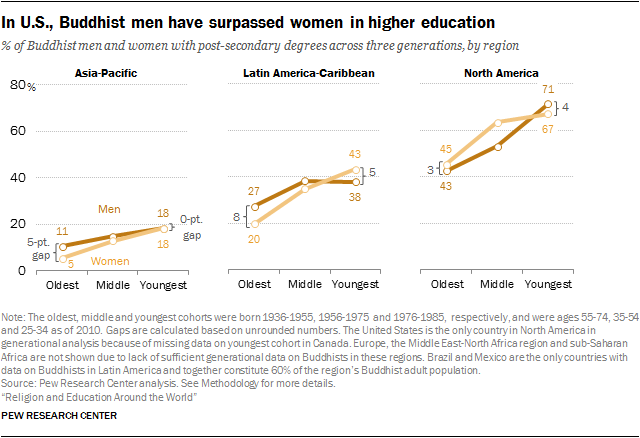 Sidebar: Buddhist diversity in higher education in Asia and the Pacific 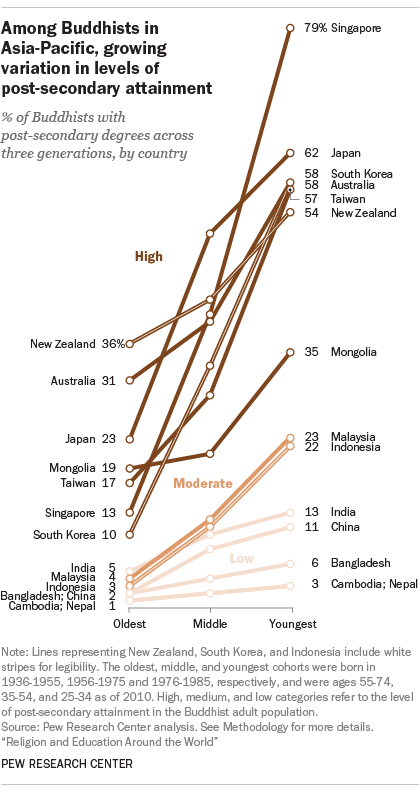 The Asia-Pacific region is home to 99% of the world’s Buddhists. But within the region, Buddhists have a wide range of educational attainment across countries, particularly when it comes to higher education.

In one group of countries – including China, Nepal, India, Bangladesh, Thailand, Cambodia and Vietnam – roughly one-in-ten or fewer Buddhists have post-secondary degrees, while slightly larger shares in Malaysia and Indonesia have higher education (12% each).

But in several other countries, including South Korea, Japan, Taiwan, Singapore, Australia, New Zealand and Mongolia, higher education is much more common among Buddhists, ranging from 24% in South Korea with post-secondary degrees to 44% in New Zealand. In Japan, which is home to nearly 46 million Buddhists (9.4% of the global Buddhist population), one-third of Buddhists have post-secondary degrees.

Buddhists in Indonesia and Malaysia have made larger gains, but not as large as those in the higher-achieving countries (see chart).