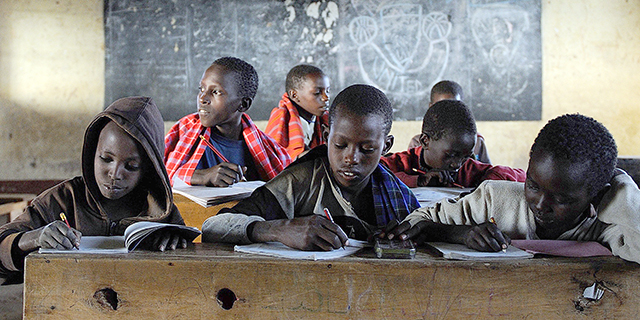 According to a new Pew Research Center global demographic study on differences in educational attainment among the world’s major religious groups, Jews are the most highly educated, with an average of more than 13 years of schooling (among those ages 25 and older). Christians, Buddhists and religiously unaffiliated people – who include atheists, agnostics and those who say their religion is nothing in particular – each have a higher number of years of schooling than the global average (7.7 years), while Muslims and Hindus have the fewest average years of schooling.

These wide disparities in educational attainment are partly a function of geography. For instance, a key reason Jews have such high levels of attainment is that the overwhelming majority live in the United States and Israel – two economically developed countries with high overall levels of education.

Likewise, low levels of educational attainment among Hindus partly stems from their concentration in the three developing countries of India, Nepal and Bangladesh, which are home to 98% of the world’s 527 million Hindu adults.

But the new study also finds important, and often large, differences in educational attainment between religious groups living in the same region – and even the same country.

These large differences between Muslims and Christians are found throughout the region, particularly in countries in western Africa, such as Nigeria, Chad and Cameroon. In 18 of the 27 sub-Saharan African countries with substantial Muslim and Christian populations, Muslims are more likely – by at least 10 percentage points – than their Christian compatriots to lack formal schooling.

The Muslim-Christian education gap in sub-Saharan Africa is found among women and men, and has persisted across recent generations. One example of this is in Nigeria, Africa’s most populous country, where Christians and Muslims are present in roughly equal numbers. Among the youngest generation of Nigerian adults in the study – those ages 25 to 34 in 2010 – more than four-in-ten Muslim men (42%) and six-in-ten Muslim women (63%) have no formal schooling, compared with fewer than one-in-ten Christian men (8%) and two-in-ten Christian women (19%).

The report also finds that religious minorities often have more education, on average, than a country’s majority religious group, particularly when the minority group is largely foreign-born and comes from a distant country.  In these cases, immigrants often were explicitly selected under immigration policies that favor highly-skilled applicants. In addition, it is often the well-educated who manage to overcome the financial and logistical challenges faced by those who wish to leave their homeland for a new, far-off country.

The report also shows that the global gaps between the highest- and lowest-attaining groups have been narrowing over time due to large gains by Hindus and Muslims in recent generations. The youngest Hindu adults in the study (those born between 1976 and 1985) have spent an average of 7.1 years in school, almost double the amount of schooling received by the oldest Hindus in the study (those born between 1936 and 1955). The youngest Muslims, Buddhists and religiously unaffiliated adults have made similar gains, receiving approximately three more years of schooling, on average, than older adults in the same groups. Over the same time frame, by contrast, Christians and Jews recorded smaller gains on their already relatively high levels of attainment.

In addition, women have gained more than men in every major religious group, helping to close longstanding gender gaps in educational attainment. In fact, Christian, Jewish and religiously unaffiliated women in the youngest generation (ages 25 to 34 in 2010) are more likely than their male counterparts to have college degrees.

Some of the biggest gains in higher education have occurred among Muslim women in Gulf Cooperation Council states. In Saudi Arabia, for instance, the share of Muslim women with college degrees has increased tenfold, from 3% in the oldest generation to 35% in the youngest. By comparison, the share of Saudi men with post-secondary degrees has risen by 12 percentage points, from 16% among the oldest generation to 28% among the youngest.

Read the full report, “Religion and Education Around the World.”