Adults in religiously mixed marriages are, by and large, less religious than their counterparts who are married to spouses who share their faith. They attend religious services less often, pray less frequently, tend to be less likely to believe in God with absolute certainty and are less inclined to say religion is very important in their lives.

When asked about what kinds of things are important for a successful marriage, 44% of adults say shared religious beliefs are “very important.” By this metric, shared religion is seen as more important for a good marriage than shared political attitudes, but substantially less important than shared interests, good sex and a fair division of household labor. There are, however, significant subsets of the population who place a higher priority on religion within marriage; most people who are highly religious themselves say shared religious faith is critical to a good marriage, and women are much more likely than men to say the religion of a prospective spouse is likely to factor prominently in a decision about whether to get married.

The remainder of this chapter explores attitudes about and experiences with religion in family life. 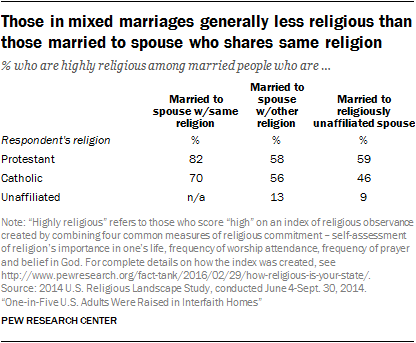 Religiously affiliated people in mixed marriages tend to be less religious than those who are married to spouses who share their religious identity. Among Catholics married to other Catholics, for instance, seven-in-ten are highly religious, according to an index of key measures used to determine levels of religious observance in the Religious Landscape Study (including frequency of worship attendance, frequency of prayer, belief in God and self-described importance of religion in one’s own life). By comparison, only about half of Catholics married to non-Catholics are highly religious.

Of course, it is impossible to know for sure the direction of the causal arrow in the relationship between religious observance and religious intermarriage. Marrying someone from a different faith might serve to make people less religious. Alternatively, it could be that people who are not particularly religious to begin with are more likely to marry a spouse with a different religion. Or it could be some combination of both factors.

For a successful marriage, shared religious beliefs prized about as much as adequate income, less than sex and shared interests

Overall, 44% of U.S. adults say shared religious beliefs are “very important” for a successful marriage. By that metric, religion is seen as about as important for a successful marriage as is having an adequate income or having children, and it is considered less important than having shared interests, a satisfying sexual relationship or an equitable distribution of housework.

Among married people, the survey finds big differences in the perceived importance of religion depending on the nature of one’s marriage. Nearly two-thirds of religiously affiliated respondents with spouses who share their faith (64%) say shared religious beliefs are key to a successful marriage. Far fewer married people in interfaith relationships see shared religious beliefs as central to a successful marriage. 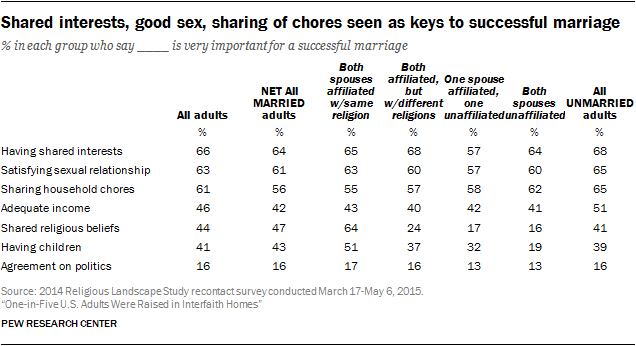 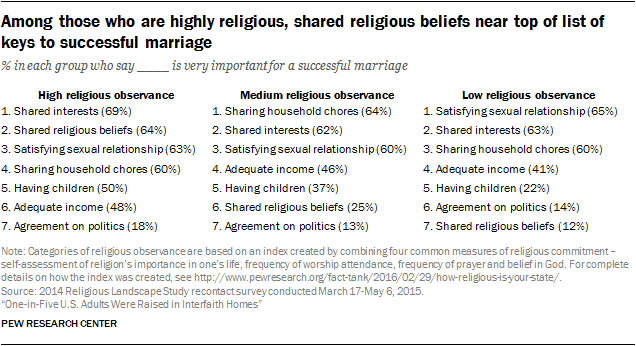 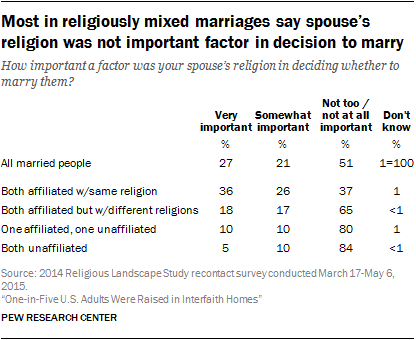 While nearly half of married people say shared religious faith is crucial for a successful marriage, just 27% of married adults say their spouse’s religion was, in fact, a “very important” factor in deciding whether to marry them specifically. Roughly a third of religiously affiliated adults who are married to someone of the same faith (36%) say their spouse’s religion factored prominently in their decision to marry, while far fewer intermarried adults – and just one-in-twenty religious “nones” married to fellow “nones” – say the same. 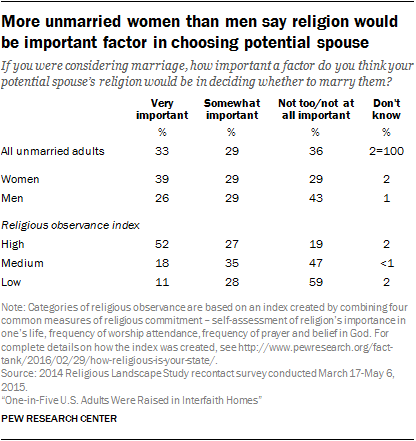 Among those who are not currently married, the survey finds the religion of a potential spouse is more important to women than it is to men. Nearly four-in-ten women say their potential spouse’s religion would be a “very important” factor if they were considering marriage, while just 26% of single men say the same.

Among both men and women, more say women are the more religious half in marriage 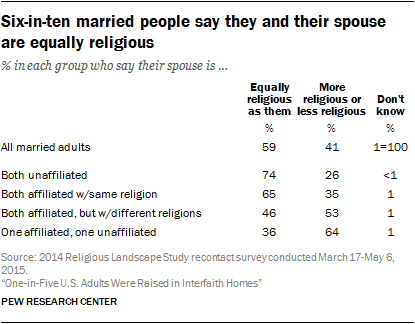 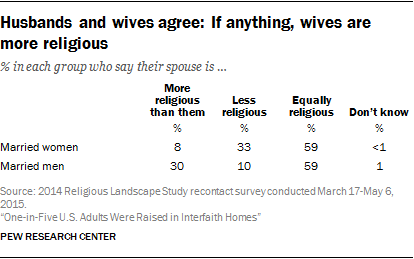 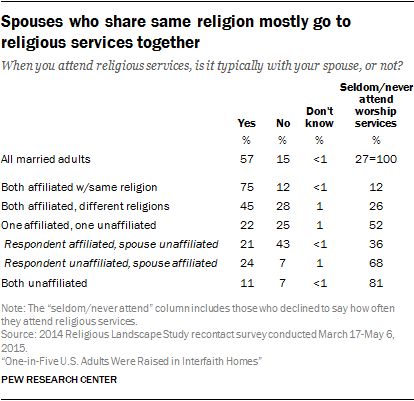 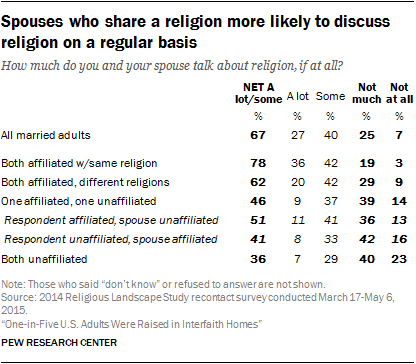 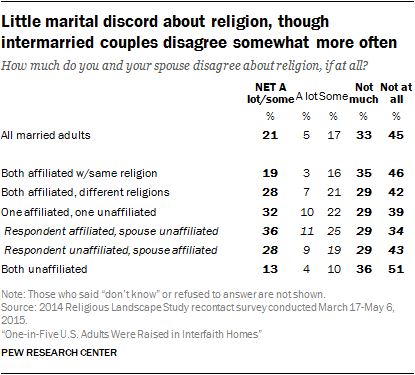 Religious disagreement is most common in religiously mixed marriages; for example, one-third of those in marriages pairing a religious “none” with a religiously affiliated spouse have at least some disagreements about religion. Still, in all kinds of marital combinations, religious discord is the exception rather than the rule; majorities in all types of pairings say they disagree with their spouse about religion “not much” or “not at all.”

Intermarried parents participate in fewer religious activities with their children 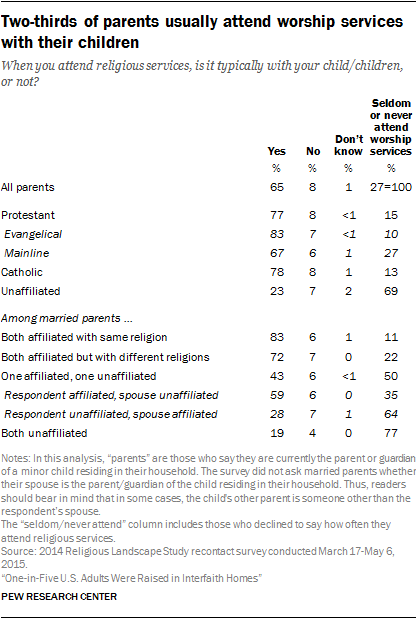 Most parents attend worship services at least a few times a year, and their children typically attend with them. About two-thirds of all parents of children currently under 18 (65%) usually attend worship services with their kids, including roughly eight-in-ten evangelical (83%) and Catholic (78%) parents and two-thirds of mainline Protestant parents (67%). Religiously unaffiliated parents are less likely to attend religious services at all; roughly seven-in-ten (69%) say they seldom or never attend church (or did not answer the question about attendance). 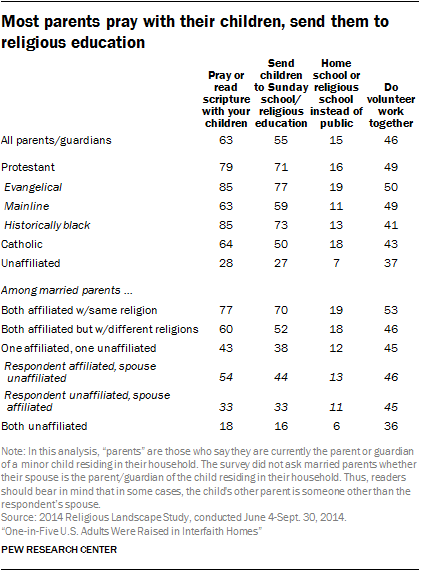 Religiously affiliated parents married to spouses who share their faith are most likely to pray or read scripture with their children and to send them to religious education programs. They also are more likely than others to say they do volunteer work with their children, though the gaps between religiously affiliated parents married to a spouse of the same faith and other kinds of couples are relatively modest on this question.

One-in-Five U.S. Adults Were Raised in Interfaith Homes 1. Links between childhood religious upbringing and current religious identity
2. Religion in marriages and families
Religiously intermarried people are generally less religious than those married to spouse with same religionFor a successful marriage, shared religious beliefs prized about as much as adequate income, less than sex and shared interestsAmong both men and women, more say women are the more religious half in marriageReligious disagreement relatively uncommon, even in intermarriagesIntermarried parents participate in fewer religious activities with their children
Acknowledgments Methodology

Hispanic Identity Fades Across Generations as Immigrant Connections Fall Away

Intermarriage in the U.S. 50 Years After Loving v. Virginia