During the Arab Spring, many world leaders, including U.S. President Barack Obama, expressed hope that “this season of change” would lead to greater freedoms for the people of the Middle East and North Africa, including fewer restrictions on religion.1 But a new study by the Pew Research Center finds that hopes for greater religious freedom in the region did not materialize, at least in the short term. On the contrary, in 2011, when most of the political uprisings known as the Arab Spring occurred, the Middle East and North Africa experienced pronounced increases in social hostilities involving religion, while government restrictions on religion remained exceptionally high.

Although the upheavals were greater in some countries than in others, each country in the region was – at least to some extent – affected by the events associated with the Arab Spring.2 Accordingly, this analysis looks at restrictions and hostilities in all 20 countries and territories in the region.3

A previous Pew Research study found that as of mid-2010, before the Arab Spring, the median level of government restrictions on religion was higher in the Middle East and North Africa than in any other region demarcated by the study.4 There were widespread expectations, therefore, that the political uprisings in the region in late 2010 and early 2011 would lead to fewer government restrictions on religion. But the new analysis by the Pew Research Center’s Forum on Religion & Public Life finds that the level of restrictions on religion remained higher in the Middle East and North Africa than elsewhere in the world. The region’s already high median score on the Government Restrictions Index (GRI) remained high (5.9 on a 10-point scale at the end of 2011, compared with 5.8 as of mid-2010), and most of the restrictions present in the region before the Arab Spring were still in place after the political uprisings, as shown in the table below. 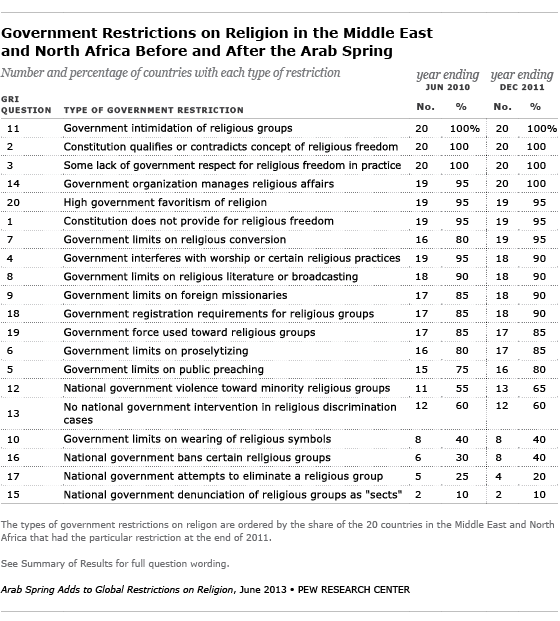 Among countries where Arab Spring uprisings occurred, government restrictions took various forms. In Egypt, for instance, the government continued to permit people to convert to Islam but prohibited them from abandoning Islam for another faith.5 In Bahrain, the Sunni-dominated government used high levels of force against Arab Spring demonstrators, most of whom were Shia Muslims.6 And in Libya, Mustafa Abdel Jalil, then chairman of the National Transitional Council, declared in October 2011 that Libya in the post-Moammar Gadhafi era would be run as an Islamic state with sharia law forming the basis of legislation.7

Restrictions related to free speech and religious choice also were widespread across the region in 2011. At least 80% of the governments in the Middle East-North Africa region limited conversion (95%), religious literature or broadcasting (90%), proselytizing (85%) and public preaching (80%). The only type of government restriction that was less common in the Middle East and North Africa than elsewhere in the world during the latest period studied was government denunciation of religious groups as “sects,” which tended to occur more often in Europe. 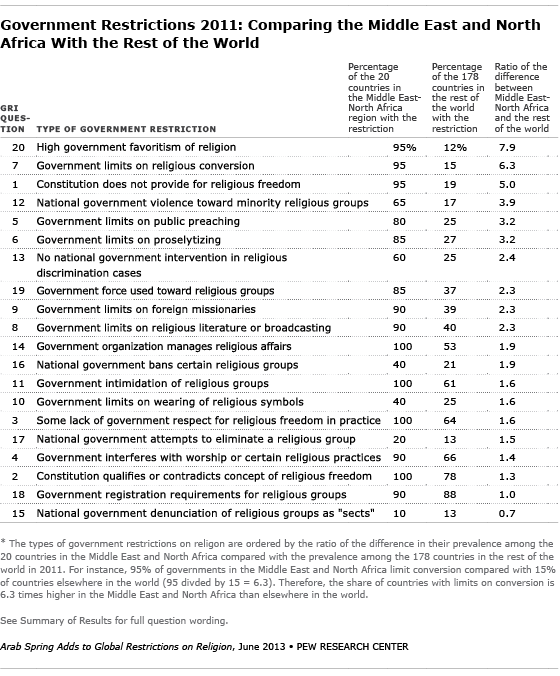 During the period of the Arab Spring, social hostilities involving religion increased markedly in the Middle East and North Africa. The region’s median score on the Social Hostilities Index (SHI) rose from 4.3 as of mid-2010 to 5.4 at the end of 2011, a five-year high. As shown in the table below, 10 types of social hostilities were present in a greater number of countries across the region in 2011, while just two types of hostilities occurred in fewer countries. One type of hostility (violence or public tensions between religious groups) occurred in the same number of countries in both years. 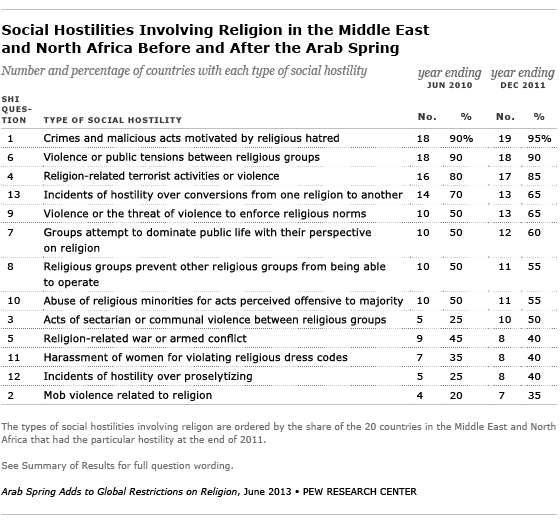 In addition, the number of countries in the region experiencing sectarian or communal violence doubled from five to 10 between mid-2010 and the end of 2011. In Bahrain, for instance, sectarian violence erupted between Shia and Sunni Muslims during a months-long period of civil unrest that began in February 2011.8 The ongoing civil war in Syria, which began as a protest against the regime of President Bashar al-Assad, now falls largely along sectarian lines.9

Among the other types of religious hostilities that spread to a greater number of Middle East-North African countries in 2011 were: violence or the threat of violence to enforce religious norms; hostility over proselytizing; mob violence related to religion; and attempts by groups in society to dominate public life with their perspective on religion. Religious minorities in the region were often the target of the hostilities.

In Egypt, for instance, the Coptic Orthodox Christian community was repeatedly attacked before and after the February 2011 fall of President Hosni Mubarak. In January 2011, a Coptic church in the city of Alexandria was bombed, leaving 23 dead and scores injured.10 In May, 15 people were killed and more than 200 injured in clashes between Muslims and Copts that began outside a church in the Imbaba neighborhood of Cairo.11 And in October, a Coptic church in Aswan province in southern Egypt was burned down.12

Religious minorities also were attacked in other countries in the region. In December 2011, for instance, hundreds of rioters in Dohuk province in northern Iraq attacked local Chaldean- (Catholic), Syriac- and Yezidi-owned businesses, allegedly at the urging of an imam who denounced the establishments as immoral.13 In Libya, groups of Salafi Muslims, who oppose the veneration of saints, reportedly have removed bodies from Sufi Muslim shrines and reburied them in other cemeteries.14 In March 2011, a bomb went off at St. Mary’s Syrian Orthodox church in Zahle, Lebanon, causing political and religious leaders to express concerns about rising terrorist violence .15 And in Sudan, extremists threatened several Christian pastors. One pastor reported receiving a warning that the attackers would “kill the infidels and destroy their churches all over Sudan” so that the country would be “purely an Islamic state.”16

In comparison with the rest of the world, a considerably higher share of countries in the Middle East and North Africa experienced social hostilities involving religion. For instance, the percentage of countries experiencing communal or sectarian violence was more than four times greater in this region than elsewhere, as shown in the table below. The share of countries with social hostilities over conversions from one religion to another was about three times greater in the Middle East-North Africa region than in other parts of the world. And religion-related war or religion-related terrorism occurred in three times the share of countries in the region as elsewhere.

Even with respect to religious hostilities that are fairly common in the rest of the world, the Middle East-North Africa region stands out. For instance, although crimes and malicious acts motivated by religious hatred and tensions or violence resulting from strains between religious groups were present in at least seven-in-ten countries in the rest of the world, the rates were even higher in the Middle East and North Africa, where upwards of nine-in-ten countries experienced such hostilities. 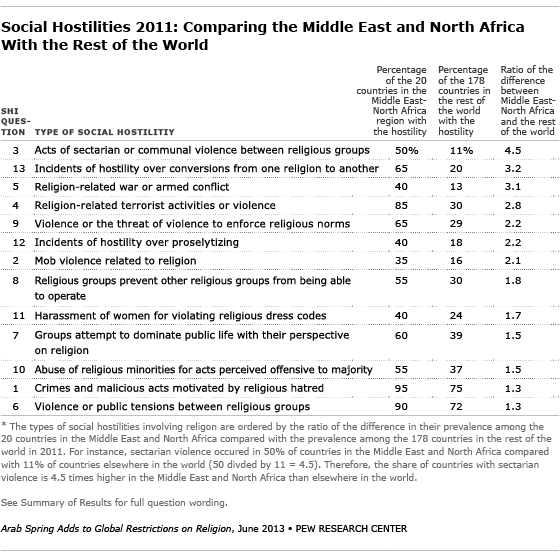 Patterns Among Religious Restrictions and Hostilities in the Region

As noted in previous Pew Research studies on religious restrictions, higher scores on the Government Restrictions Index are associated with higher scores on the Social Hostilities Index and vice versa. This means that, in general, it is rare for countries or regions that score high on one index to be low on the other.

Some government restrictions have a stronger association with social hostilities than others. The Pew Research Center’s 2012 study found that of the 20 types of restrictions comprising the GRI, government policies or actions that clearly favor one religion over another have the strongest association with social hostilities involving religion.17 As noted above, the share of countries in the Middle East and North Africa that clearly favor one religion over others was nearly eight times greater than the share in the rest of the world during the latest year studied. (See chart.)

Likewise, certain types of social hostilities involving religion are more likely to be associated with higher government restrictions on religion. The Pew Research Center’s 2012 study found that of the 13 types of hostilities comprising the SHI, sectarian or communal violence between religious groups has the strongest association with government restrictions on religion. As mentioned above, the share of countries in the Middle East and North Africa that experienced sectarian violence was more than four times greater than the share of countries elsewhere. (See chart.)

1 For more information, see President Obama’s remarks at the U.S. Department of State: The White House, Office of the Press Secretary. May 19, 2011. “Remarks of President Barack Obama – As Prepared for Delivery – A Moment of Opportunity.” http://www.whitehouse.gov/the-press-office/2011/05/19/remarks-president-barack-obama-prepared-delivery-moment-opportunity. (return to text)

2 The Arab Spring began in Tunisia in December 2010 and led to major uprisings in such countries as Bahrain, Egypt, Libya, Syria and Yemen, as well as unrest, protests and demonstrations in many other countries in the region. Its effects are still being felt in Egypt, Syria and elsewhere. This analysis looks at the events that took place in the Middle East and North Africa in calendar year 2011. See the Methodology for an explanation of how the latter half of 2010 is accounted for in this study. (return to text)

7 Mustafa Abdel Ja­lil stepped down in 2012 and the constitution of Libya has not yet been ratified. See Tenety, Elizabeth. Oct. 24, 2011. “Sharia Law for Libya?” The Washington Post. http://www.washingtonpost.com/blogs/under-god/post/sharia-law-for-libya/2011/10/24/gIQATDrhCM_blog.html. News reports indicate that support for sharia law having a central place in the eventual constitution is strong. See Dettmer, Jamie. Dec. 11, 2012. “Libyans Say Sharia Will Be Law of the Land.” The Daily Beast. http://www.thedailybeast.com/articles/2012/12/11/libyans-say-sharia-will-be-law-of-the-land.html. For more information on how Muslims in countries around the world view sharia, see the Pew Research Center’s April 2013 report “The World’s Muslims: Religion, Politics and Society.” (return to text)

15 For more information, see Human Rights Without Frontiers. “Lebanon.” 2011 Freedom of Religion or Belief Newsletter. http://www.hrwf.org/images/forbnews/2011/lebanon%202011.pdf. Also see AsiaNews. March 28, 2011. “Bomb against church in Zahle as fear of a resurgence in terrorism grows in Lebanon.” http://www.asianews.it/news-en/Bomb-against-church-in-Zahle-as-fear-of-a-resurgence-in-terrorism-grows-in-Lebanon-21140.html. (return to text)

Next: Sidebar: Initiatives and Actions Aimed at Reducing Religious Restrictions or Hostilities
← Prev Page
Page1Page2You are reading page3Page4Page5Page6Page7
Next Page →