When Pope Emeritus Benedict XVI was elected in 2005, the German-born pontiff dedicated himself to combating secularization in Europe. Research by leading European scholars had pointed to a long-term decline in religious observance among Europeans since at least the mid-1970s. 1 Benedict’s efforts to combat this trend included the creation of a new pontifical council charged with evangelizing in countries that had experienced what he called an “eclipse of God.” Given his high-profile attempt to reinvigorate the Roman Catholic Church in Europe, is there evidence that European Catholics – or Europeans in general – are any more committed to their faith than they were at the beginning of his papacy?

An analysis of Pew Research Center surveys reveals no signs of a marked resurgence of faith among Catholics in France, Germany, Spain and Italy – the four countries with the largest Catholic populations in Western Europe. Yet the picture facing the church is not entirely bleak. French, Italian and Spanish Catholics have reported low but relatively stable levels of religious commitment in recent years. In Germany, too, the overall trend in religious commitment has been fairly stable over the past decade, despite short-lived shifts in the importance German Catholics place on religion.

Importance of Religion: Low but Stable 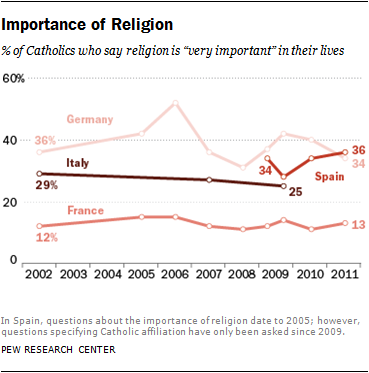 When asked how often they pray, few European Catholics say they do so at least once a day. French Catholics are among the least likely to engage in daily prayer, with between 11% and 17% reporting in recent years that they pray daily. German Catholics pray at higher rates than their French neighbors, but over the past decade fewer than four-in-ten have said they engage in daily prayer, about the same as among Spanish Catholics polled between 2009 and 2011. Among Italian Catholics, about three-in-ten said they pray daily in Pew Research polls conducted between 2002 and 2009. 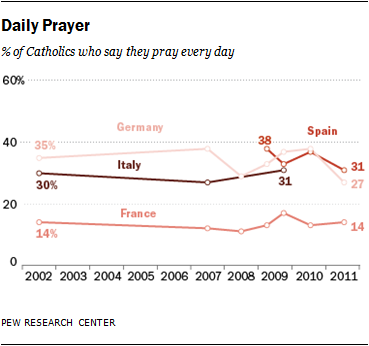 In France, Germany and Spain, where multiple Pew Research surveys have asked respondents how often they attend church, few Catholics report going to Mass on a weekly basis. In four surveys conducted between 2009 and 2011, no more than 10% of French Catholics said they attend Mass at least weekly. By comparison, between 24% and 31% of Spanish Catholics have said they attend church at least once a week in polls conducted between 2009 and 2011.2 Among Catholics in Germany, roughly one-in-five said they go to Mass on a weekly basis in 2009 and 2010. In Pew Research polling in 2011, a slightly lower proportion of German Catholics (16%) reported attending Mass at least once a week. 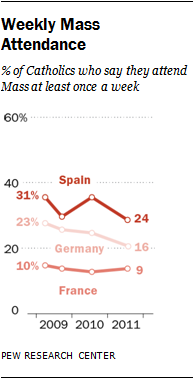 Pew Research surveys have not routinely asked about attendance at religious services in Italy.3

Similar Trends in the General Public

As with Catholics, there has been no discernible resurgence of religion among the overall adult populations in France, Germany, Italy and Spain over the past decade. 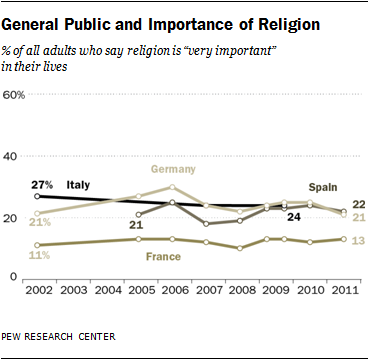 Religion is not measured in national censuses in France, Germany, Italy or Spain. Using survey data and population projections, however, the Pew Research Center estimates that the 2010 Catholic population in Italy was 49.2 million (or 81% of the total population). In France, it was 37.9 million (60%); in Spain, 34.7 million (75%); and in Germany, 27.1 million (33%).4 These are estimates of the number of people in each country who currently self-identify as Catholic.

The Roman Catholic Church counts Catholics somewhat differently. It reports estimates of all baptized Catholics in each country, regardless of their current self-identification. By the church’s count, the number of baptized Catholics has continued to rise in recent years in France, Italy and Spain but has fallen in Germany; this may be, in part, a result of Germany’s tax on church members.5

As a share of the total population, baptized Catholics have been declining in all four countries for decades, and this gradual slide continued during Benedict’s papacy. (Despite the rise in absolute numbers of baptized Catholics in France, Italy and Spain, the increase has not kept pace with the growth of the general population.) From 1975 to 2010, the percentage of France’s total population that was baptized in the Catholic faith fell about 10 points, from 85.6% to 75.1%. In Germany, the drop was about seven points, from 37.2% to 30.5%. In Spain, it was about five points, from 97.9% to 92.6%. And in Italy, it was less than four points, from 98.8% to 95.1%.

Census and survey estimates of self-identified Catholics in Europe are generally lower than the official counts of baptized Catholics. 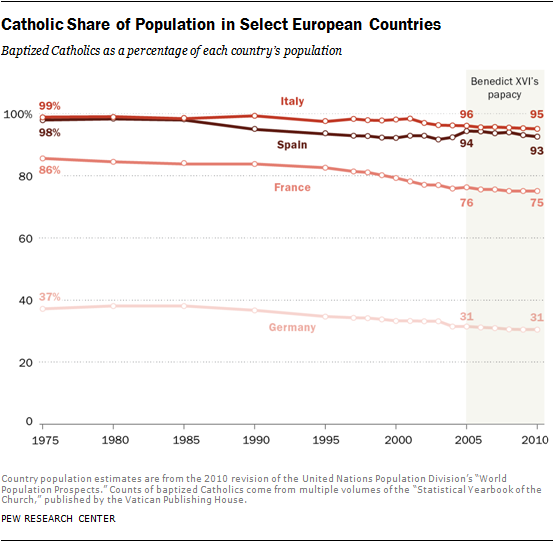 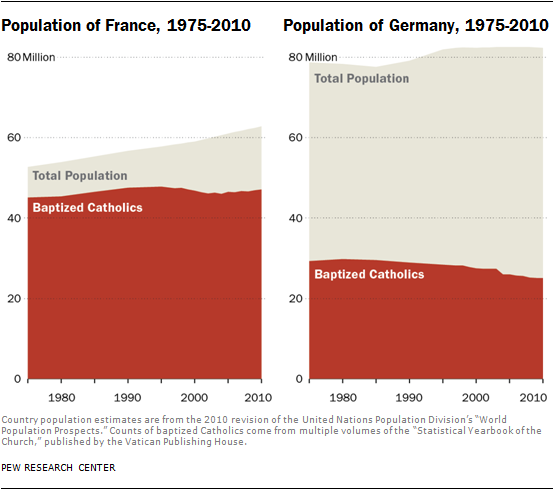 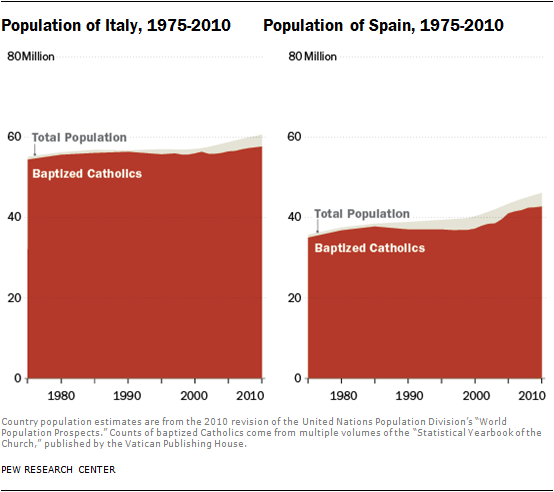 2 However, the European Social Survey (an independent, academically driven, cross-national survey established in 2001) found that the share of the Spanish population identifying as Catholics who attend Mass at least monthly dropped from 27% in 2002 to 22% in 2010. Readers should note that the ESS figures are for monthly attendance and are calculated as a shareof the country’s total population and therefore are not directly comparable to the Pew Research figures cited for other countries. (return to text)

3 The European Social Survey collected data on Mass attendance in Italy in two recent years, 2002 and 2004, both of which preceded Benedict’s papacy. The ESS found that the share of the Italian population identifying as Catholics who attend Mass at least monthly was 39% in both years. (return to text)

5 In Germany, the federal government collects a “church tax” (Kirchensteuer) from working members of the Catholic church and some other religious groups to help support those groups. Members who pay federal income tax are assessed the church tax, which is calculated as a surtax of 8-9% of the amount of their income tax.

Catholics may leave the church by completing a declaration of withdrawal in a local court. The court shares this information with the church. While some Germans leave the church to avoid paying the church tax, German studies find a variety of other commonly cited reasons for withdrawal, including the sex abuse scandal, the belief that church membership is not necessary to be a Christian and the belief that “I do not need religion in my life.” (See, for example http://www.epd.de/landesdienst/landesdienst-s%C3%BCdwest/studie-entscheidung-f%C3%BCr-kirchenaustritt-ist-langer-prozess-von-chr). In 2012, the Catholic Bishops’ Conference in Germany declared that a member who refuses to pay the church tax is not allowed to receive communion, make confession, hold church office or serve as a godparent. See Eddy, Melissa. Oct. 5, 2012. “German Catholic Church Links Tax to the Sacraments.” The New York Times.