The latest polling by the Pew Research Center for the People & the Press finds growing Republican support for Rick Santorum and shows that Santorum and Mitt Romney are now virtually tied in the race for the Republican presidential nomination. Santorum’s improving fortunes in the GOP race have been buoyed by a surge in support among white evangelicals, who now express a clear preference for Santorum over Romney and Newt Gingrich. The same poll also finds that Barack Obama now holds sizable leads over Santorum, Romney and Gingrich in general election match-ups.

Religion and the Race for the GOP Nomination 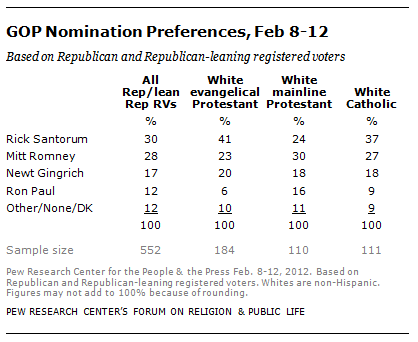 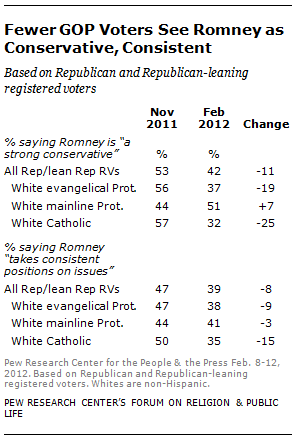 Compared with polling from November 2011, GOP voters are increasingly skeptical about Romney’s conservatism and consistency on the issues. In November, 53% of GOP registered voters said Romney is a “strong conservative.” Today, 42% see him this way. The percentage saying he is not a strong conservative has jumped from 33% in November to 50% today. Roughly four-in-ten Republican voters (39%) now say Romney takes consistent positions on the issues, down from 47% in November.

Doubts about Romney’s conservatism have grown among both evangelical and Catholic GOP voters. The number of white evangelical Republicans describing Romney as a “strong conservative” has declined by 19 points since November, and the number of white Catholics saying this has dropped by 25 points over the same period. Increasing doubt about Romney’s consistency is most pronounced among white Catholics; 35% of white Catholics now describe Romney as consistent on the issues, down 15 points in three months’ time.

In contrast with the declining numbers who see him as a strong conservative and consistent on the issues, Romney has lost virtually no ground among Republican voters in their views of his qualifications and honesty. Roughly as many today as in November say that he is well-qualified to be president (69%) and that he is honest and trustworthy (64%). These were Romney’s strongest traits in November and remain so today.

Religion and the General Election

In a potential head-to-head match-up, Obama leads Romney by eight points (52% to 44%); by contrast, Obama and Romney were running about even with each other in mid-January. Obama also holds a similar lead over Santorum (53% to 43%). Obama leads Gingrich by a 57% to 39% margin.

Among religious groups, Obama’s strongest support comes from the religiously unaffiliated. He holds a 40-point lead over Romney, a 44-point lead over Santorum and a 50-point lead over Gingrich among this group. At the other end of the spectrum, white evangelicals express the greatest opposition to Obama; he trails Romney by 55 points, Santorum by 51 points and Gingrich by 45 points among white evangelical voters. Compared with the religiously unaffiliated and evangelicals, Catholics and mainline Protestants are more evenly divided in their general election preferences. 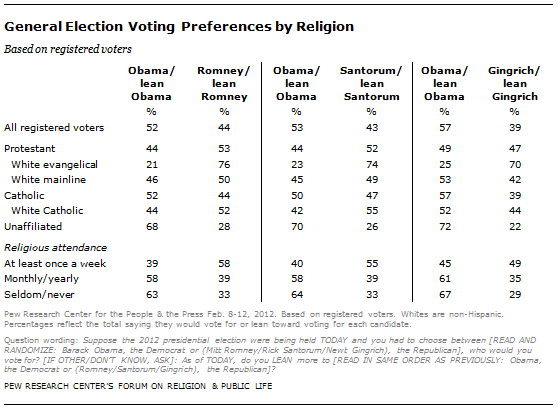 This report is based on a new analysis of recent polling conducted by the Pew Research Center for the People & the Press. For a complete discussion of the survey’s findings, including an analysis of the role of the Tea Party in the changing dynamics of the Republican race, see “Santorum Catches Romney in GOP Race: Obama Leads Both in General Election Matchups.”