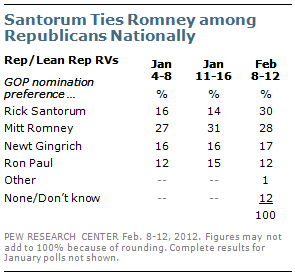 Rick Santorum’s support among Tea Party Republicans and white evangelicals is surging, and he now has pulled into a virtual tie with Mitt Romney in the race for the Republican presidential nomination. In polling conducted Feb. 8-12, 30% of Republican and Republican-leaning registered voters favor Santorum while 28% favor Romney. As recently as a month ago, Romney held a 31% to 14% advantage over Santorum among all GOP voters. 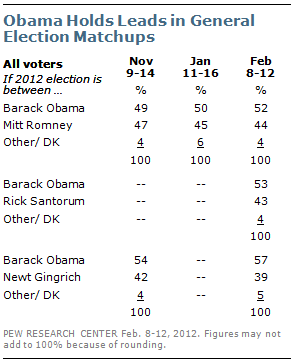 The latest national survey by the Pew Research Center for the People & the Press, conducted Feb. 8-12 among 1,501 adults, including 1172 registered voters and 552 Republican and Republican-leaning voters, finds that Barack Obama holds sizable leads over Santorum, Romney and Newt Gingrich in general election match-ups.

Obama leads Santorum by 10 points among all registered voters (53% to 43%) and his lead over Romney is nearly as large (52% to 44%). Romney ran about even with Obama in November and mid-January. Obama has a larger advantage over Newt Gingrich than over Santorum or Romney: Obama leads the former House speaker by 18 points (57% to 39%). Obama has made gains among independent voters. Today, 51% of independents favor Obama in a matchup against Romney, up from 40% a month ago. (View detailed tables to see a full demographic breakdown of Obama-Romney and Obama-Santorum matchups). 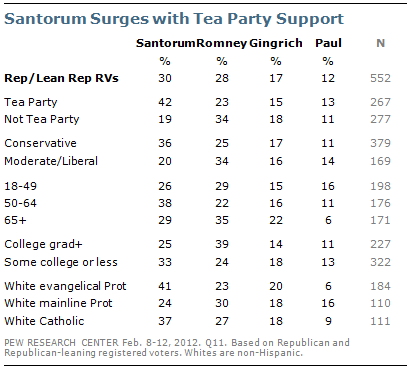 In the early GOP primaries, Romney has struggled at times in winning over the conservative elements of the Republican electorate – Tea Party supporters, conservatives and white evangelical Republicans. The new poll shows that nationally he trails Santorum among all three groups. 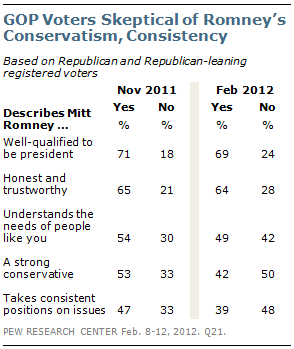 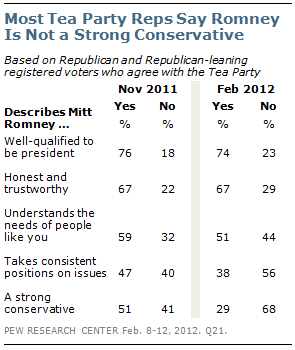 Fewer Republican voters today think Romney has been consistent as well. By a 48% to 39% margin, more Republicans say Romney does not take consistent positions on the issues. In November, 47% felt he was consistent and just 33% said he was not.

By contrast, Romney has lost virtually no ground among Republican voters in evaluations of his qualifications and honesty. Roughly as many today as in November say that he is well-qualified to be president (69%) and that he is honest and trustworthy (64%). These were Romney’s strongest traits in November, and remain so today. 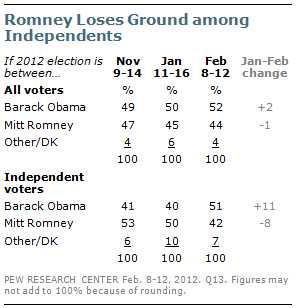 Barack Obama now holds an eight-point lead over Mitt Romney in a general election matchup, and he has gained significant ground among independent voters. A month ago, 40% of independents said they would back Obama over Romney – today 51% say they would, while the number expressing support for Romney has slipped from 50% to 42%.

Over the course of the campaign, Romney’s image among independent voters has suffered substantially. Most notably, the number who believe he is honest and trustworthy has fallen from 53% to 41%, while the number who say he is not has risen from 32% to 45%. 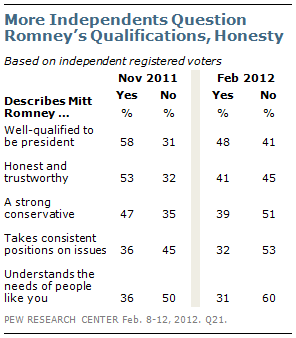 And even on his qualifications for the office – Romney’s strong suit – he has lost ground among independents. In November, a 58% majority of independents said Romney was well-qualified to be president, while just 31% said he was not. Today, 48% say he is well qualified, while 41% say he is not.

Despite these problems, Romney runs slightly better against Barack Obama among independents than either of the other leading GOP candidates. Independent voters favor Barack Obama over Rick Santorum by a 54% to 40% margin, and favor Obama over Gingrich by a wide 58% to 34% margin. 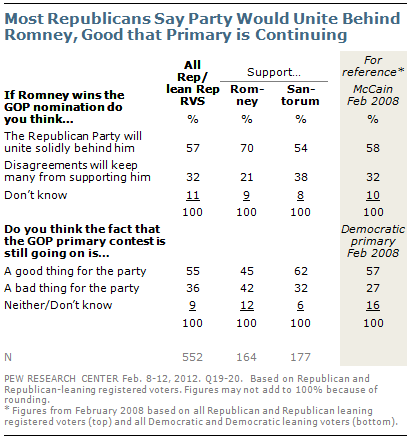 While Romney has lost support in the GOP nomination contest, a majority (57%) of Republican and Republican-leaning voters say that the party would unite solidly behind him if he wins the nomination. Roughly a third (32%) say disagreements within the party will keep many Republicans from supporting him.

In February 2008, following that year’s Super Tuesday contests, 58% of Republican voters said the party would unite behind John McCain.

A substantial majority (70%) of GOP voters who support Romney for the Republican nomination say the party would coalesce behind the former Massachusetts governor if he is the nominee. A smaller percentage (54%) of Santorum supporters express this view.

A majority of GOP voters (55%) also say that it is a good thing the race has not yet been decided. As might be expected, Santorum supporters are more likely than Romney backers to express this view (62% vs. 45%).