In his South Carolina Republican primary win, Newt Gingrich received strong support from born-again/evangelical Christians and from voters who said that it is important to them that a candidate shares their religious beliefs. Gingrich also won a plurality of votes among Protestants (42%); Catholics in the National Election Pool exit poll were more evenly split between Gingrich (37%) and Mitt Romney (29%).

Gingrich was the clear winner among the two-thirds of South Carolina primary voters who described themselves as born-again or evangelical Christians, earning 44% support. Romney (22%) and Rick Santorum (21%) finished far behind Gingrich among evangelical voters, while Ron Paul received 13% support from this group. 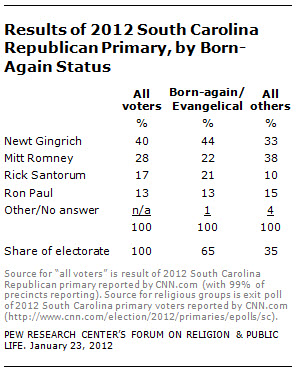 Romney fared significantly better among the one-third of South Carolina voters who did not describe themselves as evangelical Christians than he did among evangelicals; 38% of non-evangelicals voted for Romney, compared with 33% who supported Gingrich, 15% who voted for Paul and 10% who backed Santorum.

In the 2008 South Carolina primary, Romney finished fourth, far behind both eventual nominee John McCain and Mike Huckabee, and slightly behind Fred Thompson. In that race, Romney trailed both Huckabee and McCain by large margins among evangelical voters and was soundly beaten by McCain among non-evangelicals. Paul won 4% of the votes in South Carolina in 2008. 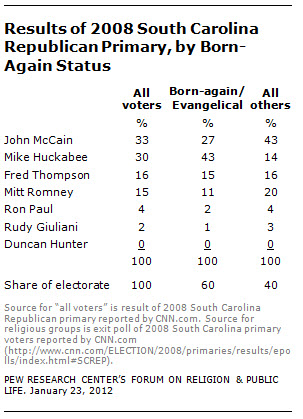 About four-in-ten South Carolina Protestants (42%) voted for Gingrich in the 2012 primary, while 27% supported Romney, 17% backed Santorum and 12% voted for Paul. Compared with Protestants, Catholics were more evenly split between Gingrich (37%) and Romney (29%).1 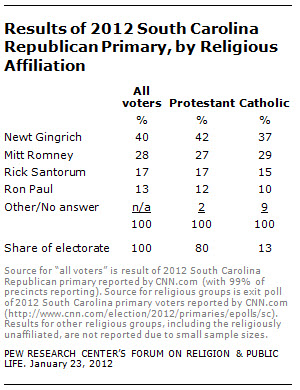 In 2008, Huckabee won 36% of the Protestant vote in South Carolina, compared with 30% for McCain, 16% for Thompson and 13% for Romney. Romney did somewhat better among South Carolina Catholics (24% of whom voted for him) than Protestants, though he still trailed McCain by a large margin (45% of Catholics voted for McCain). 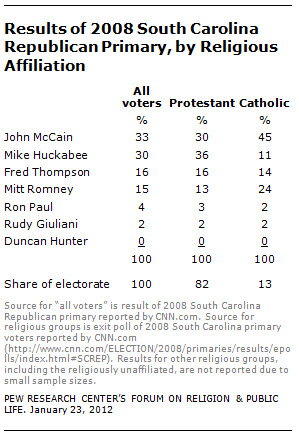 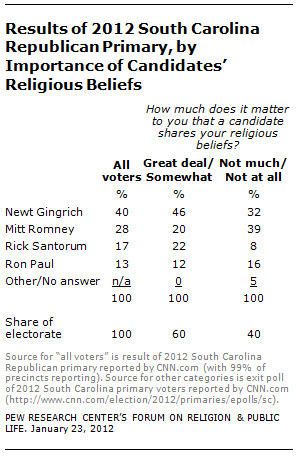 Romney also performed better among voters who attached little importance to the candidates’ religious beliefs in the 2008 South Carolina primary. He finished second to McCain among this group but fourth among those polled who said having a candidate who shares their religious beliefs mattered at least somewhat. 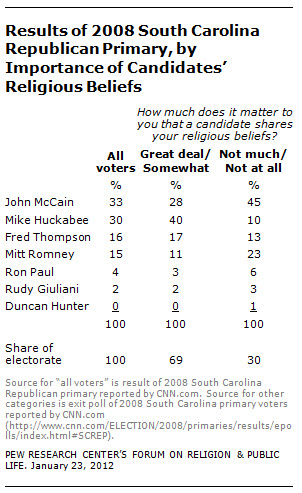