Pew Research Center conducted this study to track how individuals’ partisan identities have shifted in recent years. For this analysis, we combined responses to eleven different waves of the American Trends Panel conducted between September 2018 and July 2020. Overall, 11,077 registered voters were included in this analysis. Because not all individuals responded to all 11 waves, we used a method called multiple imputation to fill in missing responses. Multiple imputation allows researchers to account for the uncertainty inherent in applying estimation techniques to missing data. See the methodology statement for more details. 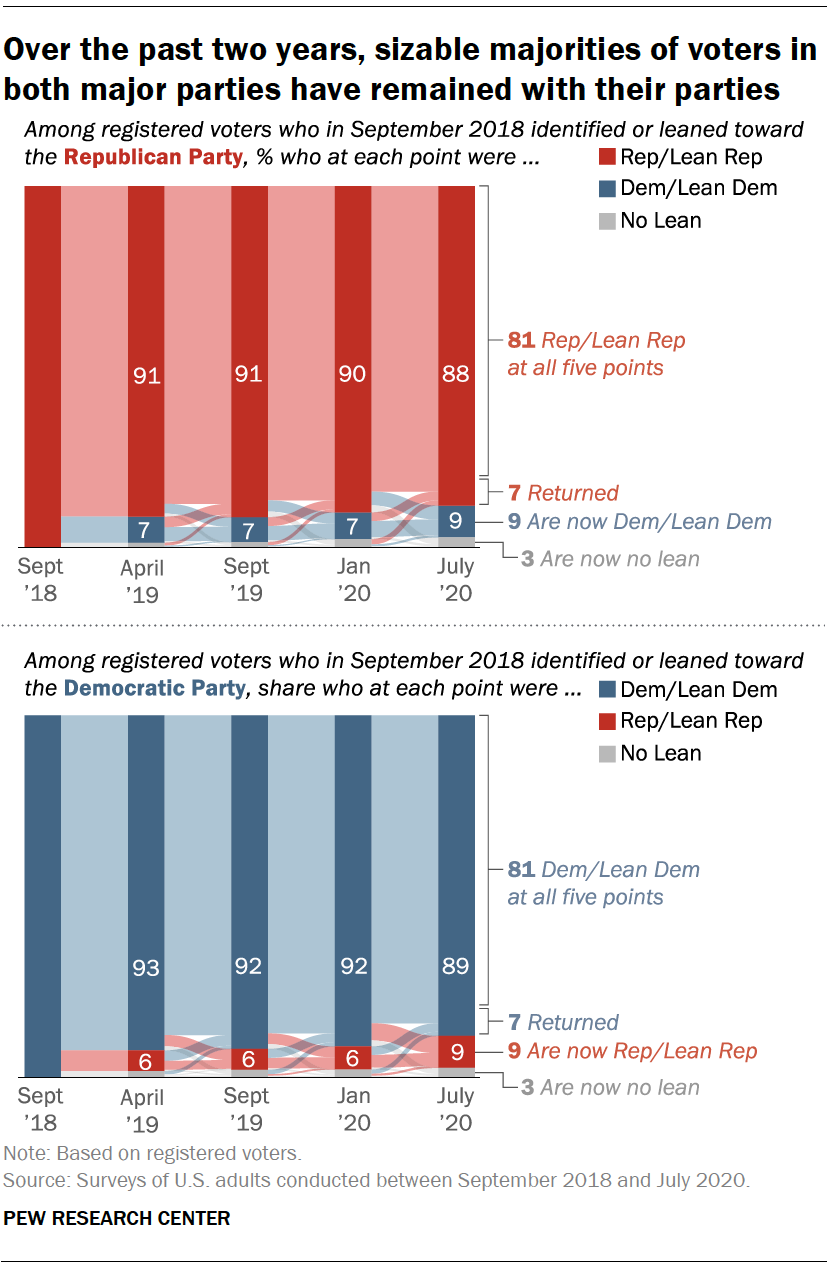 Overwhelming majorities of both Republican and Democratic voters have retained their party affiliation over the past two years, a tumultuous period marked by a global pandemic, mass protests against racial injustice and a presidential impeachment.

Since 2018, comparably small shares of registered voters in both parties have changed parties. About one-in-ten voters (9%) who affiliated with the Republican Party or leaned Republican in September 2018 now identify as Democrats or lean Democratic. An identical share of voters (9%) who two years ago identified as Democrats or leaned Democratic now align with the GOP.

A new study, conducted on Pew Research Center’s nationally representative American Trends Panel, is based on interviews with the same set of 11,077 registered voters on five occasions over the past two years, from September 2018 to July 2020.

While individual-level change has not resulted in a significant net shift in the overall balance of party identification in the electorate, that is not the case within demographic groups. For instance, among white voters without a college degree, a larger share of 2018 Democrats now tilt to the GOP than vice versa (12% vs. 6%). The reverse is true among white college graduates: 4% of 2018 Democrats in this group now associate with the GOP, while 8% of 2018 Republicans now associate with the Democratic Party. Among nonwhite voters, 10% of 2018 Democrats have moved to the GOP, while roughly twice that share of 2018 Republicans (21%) have moved to the Democratic Party.

These patterns are similar to those seen in prior years and are consistent with the long-term shifts in the composition of Republican and Democratic voters. A recent Pew Research Center examination of trends in partisan identification since 1994, based on telephone surveys, illustrated that white college-educated voters have moved in a Democratic direction over time, while white voters without a college degree have become more Republican.

For the most part, the partisan leanings of voters do not change over short periods. The current study finds that nearly nine-in-ten voters who leaned toward or identified with a given party in 2018 currently report identifying with or leaning toward that same party – including about eight-in-ten who have consistently reported that affiliation or leaning in five surveys conducted over the past two years.

Overall, about one-in-five voters made at least some change in their partisanship over the past two years, but these changes have not favored either party. Among all registered voters, 4% identified with or leaned to the GOP in 2018 and now call themselves Democrats or Democratic leaners, while a similar share of all voters (5%) now call themselves Republicans or Republican leaners but had called themselves Democrats or Democratic leaners in the fall of 2018.

Voters who have not wavered in their party loyalty are more engaged in politics and demographically different than those who have changed their party affiliation one or more times over the past few years.

Majorities of both Republican (61%) and Democratic registered voters (63%) who consistently identified with or leaned toward their parties in five surveys between September 2018 and July 2020 say they follow what is going on in government and politics most of the time. 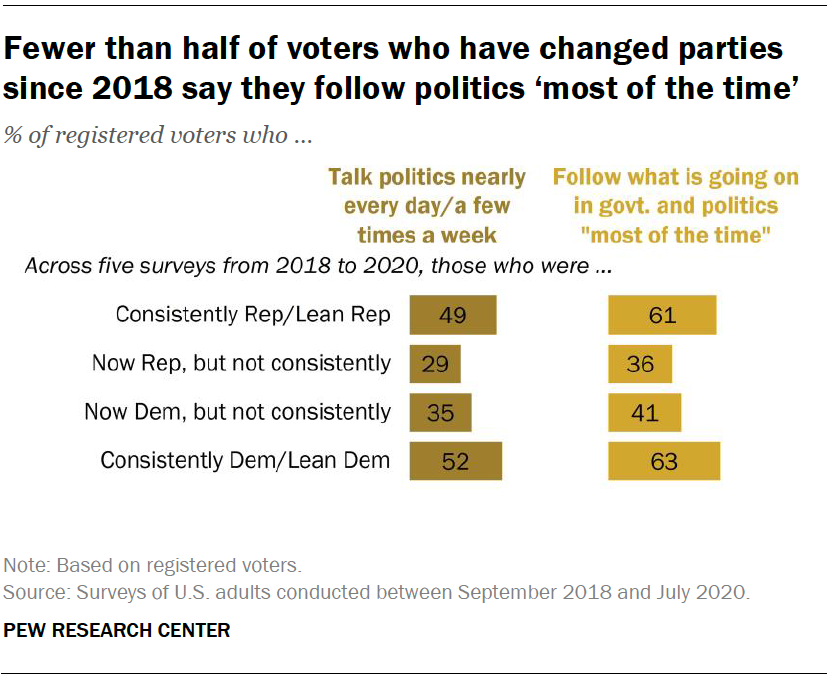 That compares with 36% of voters who currently align with the Republican Party but had shifted their party identification at some point in the past two years and 41% who are currently Democrats but had changed their party previously.

Consistent partisans are also substantially more likely than others to say they talk about politics at least a few times a week. About half of consistent Republicans (49%) and Democrats (52%) say they talk about politics every day or a few times a week. That compares with only about third of Republicans (29%) and Democrats (35%) who have shifted their party affiliation or leaning over the past two years.

Voters who have been inconsistent partisans also tend to be younger and have less formal education than those who consistently identify with or lean to the same party.

While changes in partisanship, particularly over the short term, are not common, the patterns of switching among the electorate in the past few years are largely continuations of long-term trends. 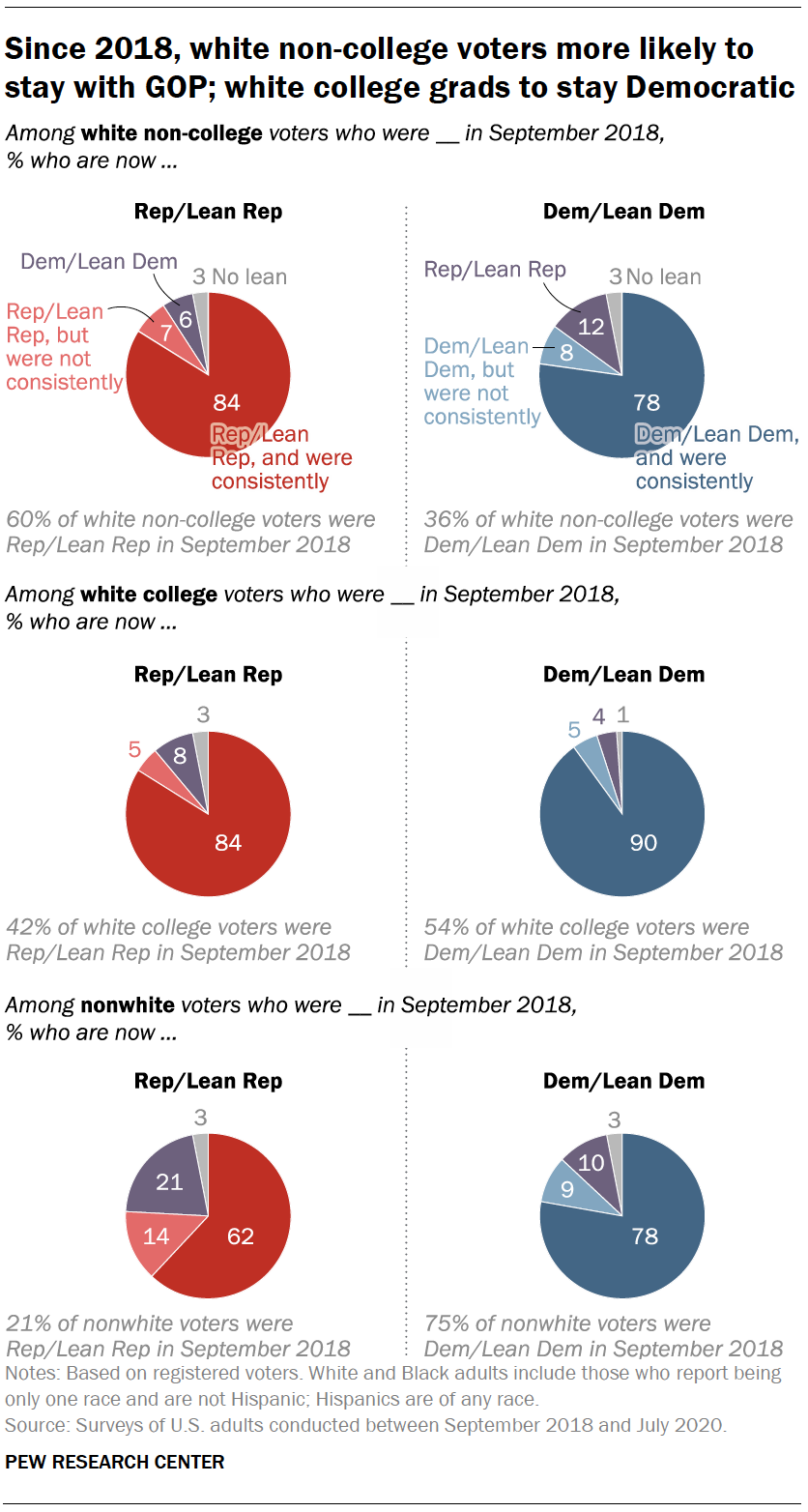 Activism on gender equality differs widely by education among Democratic women
In Changing U.S. Electorate, Race and Education Remain Stark Dividing Lines
Quiz: Where do you fit in the political typology?
U.S. Image Plummets Internationally as Most Say Country Has Handled Coronavirus Badly
The 2020 Trump-Biden matchup
Are you in the American middle class? Find out with our income calculator
What We Know About Gen Z So Far